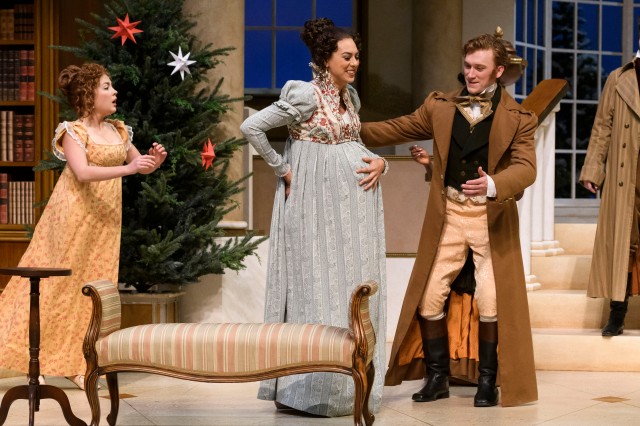 “It makes me … happy,” says Nancy McAlear, with a tiny hesitation and a smile of musing wonder — maybe about using that word.

Miss Bennet: Christmas at Pemberley, the larky romantic comedy of the holiday persuasion opening tonight at the Citadel, marks a number of firsts for the actor/director. A veteran of indie theatre of the innovative, experimental stripe, The production is McAlear’s first time directing in a 700-seat house in a big regional theatre. It’s her first time directing on a stage as large as the Shoctor, with the considerable resources that go with that.  And, she grins, “this might be the first ‘happy play’ I’ve ever worked on. I had to look at my resumé.” 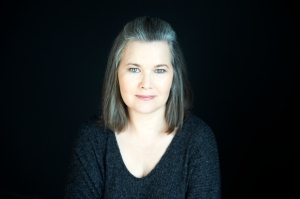 That resumé is a journey through dark mysteries, macabre comedies, unsettling thrillers, probing psychological explorations of angst. When the Montreal-born U of A- and Grant MacEwan-educated McAlear returned to Edmonton theatre a decade ago, after our 10-year loss of her to the Toronto film and TV, it was in an award-winning turn as the ever-optimistic, and doomed!, family retainer Justine in Catalyst’s way off-centre musical Frankenstein. She was the scarily unstable literary fan in Theatre Network’s stage version of Stephen King’s Misery, and a  would-be president killer in Sondheim’s Assassins.

The most recent outing by her own theatre collective, MadFandango, was Bryony Lavery’s chilly and enigmatic The Believers. She directed Belinda Cornish’s Category E , set in an animal testing laboratory. And her production of Billy (Days of Howling), with its three furiously disaffected characters, opened the L’UniThéatre season in October.

Yes, the pastel end of the colour palette, graceful Regency gowns, light-hearted romance and happily-ever-afters seem to be in short supply in the McAlear resumé so far.“To come into work and laugh a lot, and indulge every comic instinct” is something new.

This novel experience comes courtesy of a hit 2016 romantic comedy,  by the American team of Lauren Gunderson and Margot Melcon, that is a ‘what happens next?’  to Jane Austen’s Pride and Prejudice. McAlear, who is funny, self-deprecating, and straight-forward, admits candidly she was by no means an Austen devotée before now. The stormy tragedy and angst of 19th century capital-R Romance have been more her thing.  “I’m more of a Bronte person, really,” McAlear smiles apologetically. “People die… I’m more drawn to that…. Actually, Wuthering Heights was my first film as a child in Montreal. I started dark.”

Miss Bennet: Christmas at Pemberley takes up the fortunes of the Bennet sisters two years after the ending of Pride and Prejudice. And it shines the spotlight on the blossoming personality and romantic prospects of the middle daughter Mary, the dull, dismissable, bookish one who rates barely a mention in Austen. Did McAlear remember Mary?“I had to think about it,” she says.

Once rediscovered though, Mary was a draw, McAlear found. The youngest of three sisters, she “connected very much with that character, shuffled off to the side…. It took me a long time to (get past) the ‘I’m not this enough; I’m not that enough, to start to ignore what you don’t have to offer and think about what you do….”

Poor Mary, who’s devoted herself to reading, learning, playing the piano, “has devoted all this time bettering herself — for what? That’s the heart of the story, and it’s what drew me to the play.”  Mary has “a funny unfiltered quality: she is who she is….” After all, she’s been at home with her parents for two years, not seeing people and buffing up her social skills. There’s a contemporary resonance to her: “she has qualities that would not be valued even today…. She’s an outlier.”

There are, thinks McAlear, two ways to go in preparing a piece like Miss Bennet, with its gleaming surfaces and conflicts underneath. “I work both ways. But for this play I went to the form and shape first. And once you do the broad strokes, then (explore) what’s happen in that moment. Start from the outside and work backward….”

McAlear, who moved back to Toronto last season to be with her partner, will be heading back West this spring, to play the artist Emily Carr in Sher-D Wilson’s spoken-word A Love Letter to Emily C at Calgary’s Handsome Alice Theatre. Meanwhile, there’s the Citadel and the fun of a Bennet sisters reunion at Lizzie and Mr. Darcy’s place. And McAlear is downright delighted with her cast, assembled from across the country.

Some actors she’s worked with before: Edmonton’s Mathew Hulshof, Gianna Vacirca, and Emma Houghton (with whom she’s acted in the Citadel’s A Christmas Carol). Others are new to her. “And they all get along, and open to trying any silly thing I think up!”

As for Mikaela Davies who plays Mary, McAlear’s career crosses the acting/directing divide. And she likes it that way. “I love comedy. I love musicals. I feel I have something to offer in every lane.”