Merry Merry quite contrary: the Christmas spirit up against resistance, 4 festive shows on E-town stages this week

Merry Merry quite contrary. Some are born with the festive spirit; some achieve it, and some have it thrust upon ’em. And sometimes, as you know, seasonal high spirits have to be released (or wrestled down) against resistance.  Friction is theatrical Red Bull. Here are four possibilities for your holiday entertainment on E-town stages this week.

•Oh! Christmas Tree, a new Conni Massing comedy opening tonight at the Roxy on Gateway, a relationship is under extreme pressure. Lucy and Algar find themselves on the opposite sides of a yawning gulf: one is Christmas-crazy, one is not, very not. What are their marital prospects? 12thnight.ca had the fun of talking to the playwright (read that here), and to the real-life couple, Lora Brovold and Collin Doyle, who star (read it here).  Brian Deedrick’s production runs in the Roxy Performance Series through Dec. 23. Tickets: TIX on the Square (780-425-1820, tixonthesquare.ca)

•You want drama? The holiday season would not feel in any way complete without a foray into the fraught world of the amateur theatrical. It reaches peak stress levels with the small-town Christmas pageant.

That’s the setting for The Best Little Newfoundland Christmas Pageant…Ever!. Whizgiggling Productions (the Edmonton indie theatre irresistibly named for the Newfoundland term for “acting silly and foolish”) takes us once more backstage on the Rock, Canada’s eastern-most and arguably most flavour-ful province. It’s the ninth annual incarnation of this riotous show, culled from a much-loved Barbara Robinson novel.

When the usual director of the Christmas pageant is out of commission, due to an unfortunate run-in with a moose, poor Mrs. O’Brien has taken the reins. The annual auditions have been overrun by “the worst kids in school,” the Herdmans, attracted by rumours of snacks. Not only are they utterly stumped by the pageant plot — “Mary ties him and shoves him in a feedbox?! Where was Child Welfare?” — these born-again thesps are after all the best parts.

What will happen to the Christmas spirit under the circumstances?

The production, which has found a new home this year at the Backstage Theatre (ATB Financial Arts Barns), stars Kayla Gorman, Natalie Czar Gummer, Cheryl Jameson, Eric Smith, Lindsey Walker and Michael Vetsch. It runs tonight and Friday, plus Dec. 18 to 23. Tickets: TIX on the Square (780-420-1757, tixonthesquare.ca), or at the door.

•A Hudson’s Bay Story, a seasonal Stewart Lemoine playlet, returns to the stage Friday and Saturday as Teatro La Quindicina’s part in BE Merry, a two-night Ballet Edmonton holiday entertainment at the Varscona. In A Hudson’s Bay Story, a disgruntled Bay menswear sales associate enters into fractious serial email exchanges to register his complaint with a woman in Toronto head office. His grievance? the inclusion of a certain carol in the store’s pre-opening music for the holiday season early shifts. Victor Morrison has his reasons, I assure you. I leave you to discuss amongst yourselves, and lay wagers, which carol it is. Jeff Haslam reprises the role.

BE Merry embeds the Lemoine playlet in an evening of festive music and dance. The latter is seven short pieces set to holiday music and choreographed by company dancers. Ballet Edmonton’s executive director Sheri Somerville hosts. And as a Christmas bonus, she’ll be singing, along with fellow Teatro stars Jocelyn Ahlf and Andrea House.

BE Merry runs at the Varscona (10329 83 Ave.) Friday and Saturday. Tickets: tickets.balletedmonton.ca or at the door. 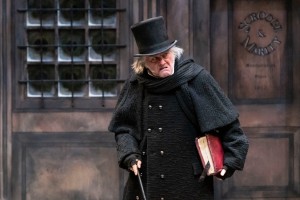 •If you haven’t seen the repertoire’s most famous skinflint reclaimed for the world of human connections yet this year, there’s still time. A Christmas Carol, the Citadel’s deluxe 19-season-old Tom Wood adaptation, runs till Dec. 23. It’s your last chance: next year, the theatre plans to mount a new version of the perennial Dickens tale of last-minute redemption. Tickets: 780-425-1820, citadeltheatre.com.