The Cardiac Shadow: where the soul goes under extreme duress. A review.

In the theatre, the dim light glints off the barbed wire that separates us from the stage.

At the back we can just make out a kind of altar, draped in bulbs. It turns out to be a dismembered upright piano from the back, its keys hanging from the sides, along with a selection of violins and cellos, and wooden spoons. The pianist sitting beside me is disturbed by the image.

Actually everything about the prospect of The Cardiac Shadow, premiering at Northern Light Theatre, is disturbing. It is, after all, imagined from a chilling footnote in the real-life book of Holocaust horrors: a Nazi extreme-temperature experiment that used the prisoners of Ravensbruck concentration camp to ascertain whether body heat and proximity can re-warm near-frozen human flesh. Jewish male prisoners were immersed in ice-water tanks to the point of death; women prisoners were made to lie naked with the survivors to assess whether life can be restored on this terrible threshhold between survival and extinction.

Grim, to say the least (and theatre that takes on the immensity of the Holocaust often seems to be saying the least). 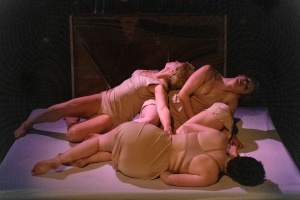 But The Cardiac Shadow, which began as a series of monologues by the American writer Clay McLeod Chapman, isn’t a re-enactment of torture, or an invitation to be appalled, or even a cautionary tale. Not exactly. In the conception of Northern Light director Trevor Schmidt, it’s an elegantly artful little chamber piece. And the chamber in question is the mind, or more precisely the memory vault where the human mind can travel and warm itself when the present is too terrible to bear.

Where is that place? The Cardiac Shadow finds it for each of the four women, used as bodies, human thermometers, by the Nazi Dr. Rascher.

In extremity, the body and the soul are able to go their separate ways. The director’s performance concept is to separate the women’s voices, a vocal track of monologues from four actors, from their bodies, a quartet of accomplished dancers from The Good Women Dance Collective.

There’s a certain paradox, to be sure, built into the conception of  survival as a matter of the soul breaking free of the body, to imagine instead this liberation as … bodies in motion. But the imagery of remembering, as created by dancers who express themselves physically, makes for haunting theatrical visuals. The dancers step out of sculptural-looking group tableaux, bathed in painterly golden light (designed by Beth Dart), to present their monologue in physical form, against the sound of an actor’s voice and Dave Clarke’s music. And then they return to the group.

The production begins with the voice of Dr. Rascher, the scientist who presided over the so-called “Cold Conference” experiment. You hear the voice of actor Vance Avery against an eerie, vintage-looking 12-minute black-and-white film.

It’s a strangely uninflected delivery. It’s As Dr. Rascher, apparently a devoted and indulgent father, talks about his gold-haired little daughter, you see a beautiful little girl in the snow, happily unpacking an old suitcase of props and costume pieces, playing dress-up. Amongst the articles she removes from the case to play with are a tiny menorah and a Hebrew prayer shaw. Your heart stops when you see them. And then they’re gone.

In the monologue the playwright gives him, Dr. Rascher talks imperturbably on about his precious little girl in one breath, and in the next the Ravensbruck women on whom he’s experimenting — as if they were on a continuum, with no acknowledgment of moral contradiction. “Seeing how peaceful they looked, how serene they seemed, huddled together on that bed — I swear, I never wanted to wake them.” If there’s anything the 20th century has taught us it’s that the human mind is capable of any kind of acrobatic contortion. 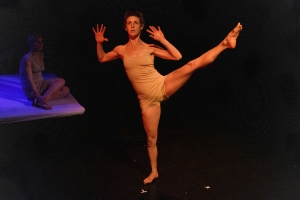 In a lovely balletic fantasy fuelled by the spirit of classical music, Kate Stashko, with the voice of Rachel Bowron, is Anna. She’s a musician herself who finds her escape in music, especially Mozart. Her image about playing the body of a first lover like a cello is memorably realized.

Ainsley Hillyard (with the voice of Megan Dart) remembers a young and vibrant self,  conjuring a trip to the beach, “basking in the sun, warming ourselves.” It happens onstage in Hillyard’s invention, in strange, almost playful, body angles and collapses, to the sound of waves. And she’s joined in her memory by the other dancers, a ghostly corps of smiling friends.

One of McLeod Chapman’s monologues stands defiantly apart from the others. Jarringly so, I think. Sarah, danced with muscular force and eloquence by Alison Kause to the edgy, angled voice of Elisa Benzer, is firmly rooted in the bleak present — and the decision to  survive, not by finding a secret place of spiritual sustenance but by taking food from the mouths of the dying in the camp. It’s a confession of sorts (“thank God I’ve gotten hell out of the way”), accompanied by Edvard Munch-ian  facial contortions and aggressive Beethoven riffs (Clarke’s musical choices are always expressive).

Is it a (possibly unnecessary) reminder that survival is only a fantasy under the circumstances (though it certainly explains the wooden spoons hanging from the “altar”)? The ending, a startling theatrical effect in lighting that evokes thoughts of religious miracles, returns us to the mind of Dr. Fascher, and his discovery about the heart. In hypothermic shutdowns, it is the last to give up the ghost, .

“Multi-disciplinary” is an oft-tortured term in the arts. Here’s a production that experiments with using dance, theatre, music, and film in an original amalgam — as an homage to imagination under unthinkable circumstances.