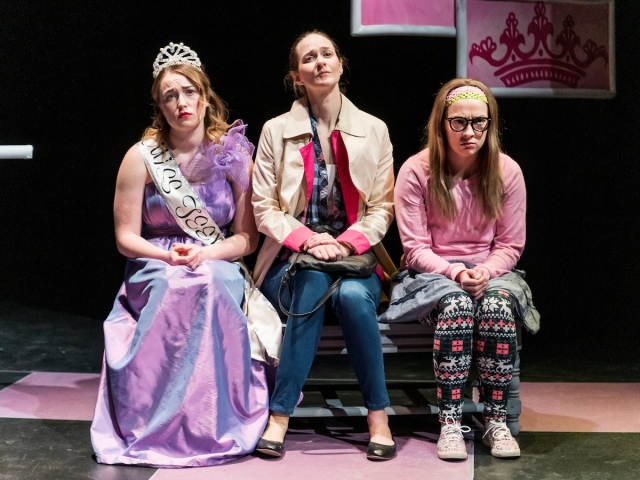 In Miss Teen a strapped, single mother enters her awkward, bookish daughter in a local teen pageant. “It’ll be good practice … for life,” argues Coco brightly, undeterred by Margaret’s reaction, a mixture of appalled and incredulous.

Well, true enough — if life includes a chance to survive humiliation, learn a lesson about teen pageants (and high school) you already knew, and gain a (temporary) platform to announce your new-found wisdom about what’s really important.

The latest Michele Riml sitcom currently premiering at Shadow Theatre, is one of those plays that reference the culture and play around with its clichés, but don’t actually dig into anything. And, as Edmonton audiences know, the Riml canon contains a few of those.

In Sexy Laundry, for example, a hit for Shadow a decade ago, a middle-aged couple has a dirty weekend in a posh hotel in order to put the spark back into their 25-year marriage. Its sequel Henry and Alice: Into The Wild, which played the Mayfield a couple of seasons ago, involved a non-stop series of aged sight gags that got gender clichés into Eddie Bauer gear, putting up a tent. The ad exec of Poster Boys, which was at Theatre Network, discovers that, lo and behold, the industry she works in is shallow and its re-branding motives suspect.

What all of the above, and Miss Teen, have in common is their reliance on the charms and comic chops of game actors, stepping bravely up to thin material. And John Hudson’s production has four of those.

Coco’s life has a daunting column of negatives: a shitty childhood, low income, debt, a crap job, an ex-husband dying of cancer in her apartment, two teenage daughters to support. Both are smart: Margaret (Emily Howard), the elder sister, is shy and unpopular; Nicole (Emma Houghton), an 11-year-old mouthpiece for unfiltered observations, is phobic about social contact. Both performances amusingly and convincingly set forth characters:  Howard as the skeptical Margaret, whose essay on “the economic effect of automation on the women of the Third World” is her calling card; Houghton as the eerily watchful, wary little truth-sayer who’s stony-faced about the social niceties.

As played by the engaging Kristi Hansen, Coco, though, has somehow armed herself with a plucky positivity fuelled by family mythology and parental aspirations. She is a veritable repository of aspirational slogans designed to implant dreams in others: “shy sometimes comes off as aloof” or “you need to get your feet wet if you’re gonna go swimming” or “it’s the startling line that counts.” Or this one: “luck changes,” short for the hope that the Miss Teen title will bring with it an alteration in family circumstances, including a university scholarship for Margaret. 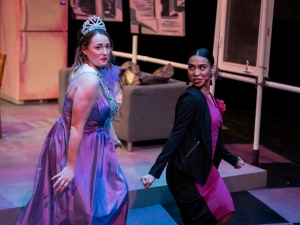 Which brings us back to the teen pageant — and Coco’s brisk and glossy corporate-speak counterpart in sloganeering. With Dusty, the pageant’s improbable coach and polisher, Cerra has the play’s most thankless role, a parody of  clichés well past their prime for fighting back with any vigour.

“Choices about your outside reflect your inside,” she tells the glum Margaret, advising 15 minutes of smile exercise, “working up to half and hour.” Or “you have cheekbones. Use them.” As Dusty tells Coco, “”training to be a Miss Teen takes discipline…. She needs to bring her A-game to this.” Cerra, a skilled comic actor, steps up and attacks with gusto on pink stilettos (costume designer: Leona Brausen) and the kind of carnivorous smile that should terrify the rabbity.

Beauty pageants — even the more modern kind that claim to be about rewarding global vision, heart, soul, smarts, “being fresh” etc. instead of anything superficial like “beauty” — are a pretty tired target in truth. Miss Teen has a go anyway (you could call it bravely old-fashioned in a way), with its sample judges’ questions and its “correct” prescribed responses. When a candidate is asked “what makes you happy?” you should avoid saying Netflix. The only possible answer is “being there for other people.”

Dusty’s climactic advice, “just be yourself,” is of course the play’s most deliberate irony, and somehow it fails to fire at the crucial moment.

The story here, and the lessons therein, hinge on Margaret’s being cajoled, or bribed, or perhaps badgered by the persistence of her mama, into signing on to the teen pageant — and then, for reasons that are less clear, to say the least, being actively gung-ho herself,  The love of retro? The seductiveness of celebrity? The erosion of will? The desire to please trumping inherent smarts? Your guess is as good as mine. Darrin Hagen’s scene-separating score hints amusingly at conventional fairy tale fantasies.

Anyhow, when Margaret unexpectedly wins the first round, Coco steps up her tactics in ill-advised ways. Poor Margaret. Poor Coco. It is the determination of Miss Teen, rather self-evidently, that comedy and poignance should co-exist, and that lessons should be learned, and “issues” resolved before the end.

The production, and Hansen’s performance, emphasize that the character is an empathetic, well-meaning stage mother who figures out that handing dreams to your kids instead of letting them devise their own can backfire. Hey, it’s called self-esteem for a reason. Coco doesn’t go down screaming or in a straitjacket; she gives up her plan in a graceful and good-natured way that seems less dramatically demanding but more touching.

The script is not without its comic inspirations. And you’ll have the fun of seeing what skilled actors can do in lack-lustre circumstances. There’s something theatrical in that.