How to feel the breeze at Chinook

If there ever was a town that needed a chinook … an E-town story.

And yes, we’re having one. The Chinook Series, which opens tonight, is a resource-pooling experience between arts groups  with a view to expanding our experience of live performance and theatre creation. Maybe you’ll even find out what “multi-disciplinary” really means. In practice, where it counts.

The best way to do Chinook, I think, is to give yourself over to the breeze: wrap yourself in the  “festival” mantle, show up for the evening, and let yourself be blown here and there to whatever is going on. If you get there early enough, you might hear artists talk about their work in the lobby, and ask a question or two, even one that starts “what on earth.?” … Between shows you can (whilst clutching a glass of wine) watch a troupe of “Lobbyists” create movement pieces that are a kind of inspiration for those of us who are intimated by the idea of dance. By happenstance and just hanging out I’ve seen “plays,” dance-theatre fantasias, personal memoirs, unclassifiable fusions of music and text, wordless movement pieces, and, generally, theatrical experiences I might never have chosen for myself. Hey, I even took salsa lessons last year in a show (my skills have atrophied since then).

So it’s against my own advice, I know, but here’s a little selection of shows that did catch my eye. I’ll be seeking them out….

Gemini (part of Workshop West’s Canoe Festival): I saw the first incarnation of Louise Casemore’s award-winning two-hander  at the 2017 Fringe, and in a bar (the catacombs of El Cortez Bar and Restaurant, which is where the characters meet each other.  Julia (Casemore) is the server; Ben, a failed poet and underachieving consultant (Vern Thiessen), is a regular. And in a bar culture that palms itself off as intimate, their relationship ets explored in nuanced ways you’ll recognize.

The production at the Almanac bar on Whyte is new. It’s directed by Mitchell Cushman, the wunderkind of Toronto site-specific theatre — returning to the town where he got a degree in directing at the U of A. And in addition to Casemore, who’s an alert and dexterous performer, you’ll have the rare sight of Workshop West artistic director Vern Thiessen onstage.

Songs My Mother Never Sung Me (Sound Off: A Deaf Theatre Festival): This new show by the multi-threat Dave Clarke, one of E-town’s busiest sound designers and composers, was commissioned by Concrete Theatre. An opera of sort, through-sung, it’s spun from Clarke’s own experience of growing up with deaf parents. And Mieko Ouchi’s cast includes both hearing and deaf performers. Keep an eye out for 12thnight.ca’s interview with Clarke.

Ins Choi: Stories, Songs, and Spoken Words (Fringe Theatre). The charismatic creator of Kim’s Convenience is here onstage himself in a performance swirl that’s part concert, part storytelling, part cabaret (kind of)… 12thnight.ca had the fun of talking to him. Look for that interview soon.

A Chitenge Story (Black Arts Matter!): Calgary theatre artist Makambe K. Simamba tells her story of returning to her birthplace, Zambia, to confront the man who abused her as a child. 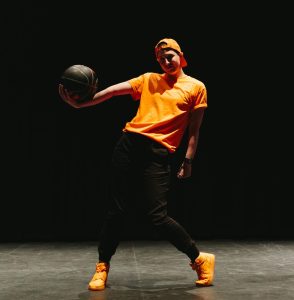 NIUBOI in Tip Off!. Photo by Mat Simpson.

Tip Off! (Expanse Movement Arts Festival) and Glass Washrooms (Fringe Theatre): Both are the work of one of our most adventurous theatre artists, NIUBOI (Julie Ferguson). The first, which developed under the mentorship (and new work award) of Good Women Dance, has NIUBOI joined onstage by three actors (plus the voices of sports commentators). It’s inspired by the lexicon of basketball. The second, which happens in the Westbury Theatre washroom, explores the artist’s own background growing up and into the trans-non-binary quester they are now. It was developed in NIUBOI’s term as the first recipient of the Nordic and Cloutier Family Innovation Award. Beth Dart directs.

Mni wiconi/ water is life (Expanse Movement Arts Festival): It’s by Nicole Schafenacker, whose work at Nextfest has always been off-centre and original; the Schafenacker pieces I’ve seen have involved intriguing juxtapositions of text and movement, with an activist edge. As billed, this one is inspired by her 2016 experience time as a ‘water protector” at Standing Rock, N.D.

That’s just a quick sample. There are alluring possibilities everywhere at the festival, including in a new Chinook partnership called Sinergia. Check out the program, and the full schedule, at chinookseries.ca.

The festival runs through Feb. 17 in various venues in the ATB Financial Arts Barn, 10330 84 Ave.