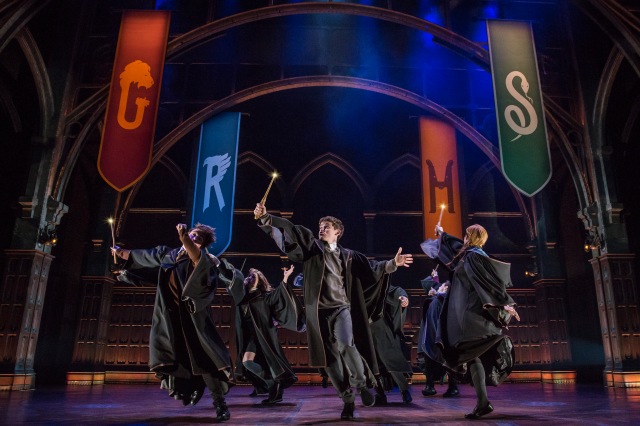 Harry Potter and the Cursed Child. Photo by Matthew Murphy

NEW YORK — “Keep The Secrets” say the little buttons you get handed out when you leave the Lyric Theatre near Times Square.

I’m pretty sure that doesn’t apply to the golden star-studded blue ceiling in the lobby, or the new red carpet, woven with the insignia of the four houses at Hogwart’s. So before a Dementor gets me I’m telling you this: look up and look down.

But you’ll have to keep your voice down when you’re in a bistro, de-briefing with experts between Parts I and II of Harry Potter and the Cursed Child. Wednesdays, Saturdays, and Sundays are total-immersion Harry Potter days in New York, when you can see both parts of this thrilling non-stop extravaganza of storytelling and theatrical stagecraft, 2 and 7:30 p.m., set in motion by wizard director John Tiffany. That’s what we did. 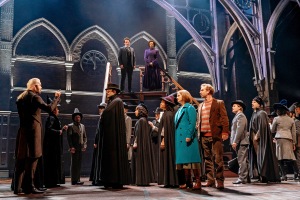 Harry Potter and the Cursed Child. Photo by Manuel Harlan.

The plot of the Jack Thorne’s two-part play (based on an original new story by J.K. Rowling, John Tiffany, and Thorne) is a a veritable 100-acre wood of complications (oops, wrong story), to put it mildly. And it takes nearly six hours, and two full-length plays, to negotiate it. But then, in truth, what true Harry Potter fan, seven intricate Harry Potter novels later, would be satisfied with simple? And besides, you don’t have to be a die-hard Potter-head (I’m not) to be dazzled by the experience, though it’s extra fun to know some of the back stories (remember Moaning Myrtle?). What is magical indeed is how the cast, 40 strong, manage the non-stop activity of two-show days.

Anyhow, time has flash-forwarded since last you met the characters. Harry Potter (the excellent Jamie Parker) is an anxiety-plagued grown-up, an employee of the Ministry of Magic. His boss is Hermione (Noma Dumezweni), who’s married to Ron Weasley (Paul Thornley. And as the show opens, Harry and his wife Ginnie née Weasley (Poppy Miller) along with Hermione and Ron are at King’s Cross station, platform 9 3/4, seeing their own kids off to Hogwart’s at the start of term. 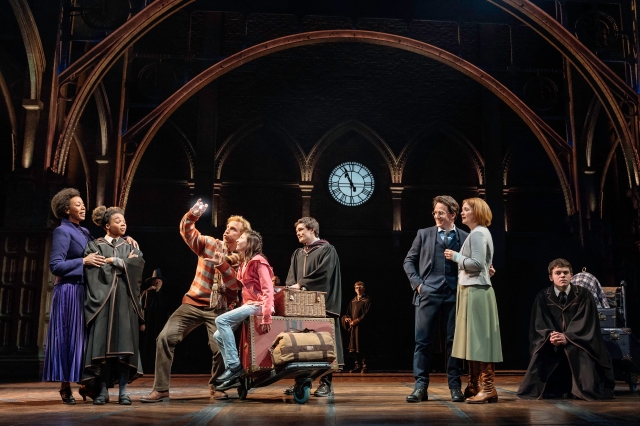 Their awkward younger son Albus (Sam Clemmett), who has a troubled relationship with his dad, will find a friend in the son of his dad’s arch-enemy Draco Malfoy. The elder Potter son James is played by Edmonton’s Ben Wheelwright (who’s been a Tiny Tim in the Citadel’s Christmas Carol in his time), among many other of his assignments in Harry Potter and the Cursed Child. And it’s a thrill to see him onstage in this spectacular hugely demanding diptych.

“It’s been a blast to be a part of,” says Wheelwright, whose first New York assignment was the alternate lead in the Broadway production of The Curious Incident of the Dog in the Night-Time. “Super exhausting at times, but I wouldn’t have wanted to spend this year doing anything but swishing cloaks and being part of all the magic.…The show is choreographed by the same person (Steven Hoggett) as Curious Incident. So when I signed up I knew the type of high-intensity, physical demand he asks of his actors….”

How Christine Jones’ vaulted set is transformed to the grand hall at Hogwart’s is wizardry all its own, and the same can be said for Neil Austin’s lighting. The wonderful thing about Harry Potter and the Cursed Child is that, despite its huge size (and budget: reportedly $68 million U.S.), the magic of the show is is magic of the theatre, created by the ingenuity, sophistication, and resourcefulness of theatre artists at the top of their game. It’s not some sort of showcase of cinematic special effects.

The actors are deeply committed. And in addition to its flamboyance with time travelling, the story itself has a coming-of-age heart, a human pulse you can feel — the craving for friendship, the bonds of parental love and expectation, guilt and the fear of being alone in the world. I loved it.