Lungfuls of anxiety: Lungs at Shadow Theatre. A review

Times being what they are, are you still “good people” if you decide to become parents? To bring another being into a world that’s already over-crammed with beings? A kid leaves a carbon footprint that’s bigger than “flying from London to New York and back every day for seven years.”

In the first scene of Lungs, a crackling and edgy two-hander by the Brit playwright Duncan MacMillan, we meet a couple having this volatile “conversation” — in the lineup at IKEA. “I’m not freaking out!” declares Woman, freaking out in a veritable torrent of free-associative freak-out to Man’s thought that maybe they should have a baby. “It’s like you punched me in the face and then asked me a math question.”

The actors, Elena Porter and Jake Tkaczyk, have valiantly stepped in, on short notice (a week ago) to the production now directed by John Hudson and Emma Houghton when the original cast departed. 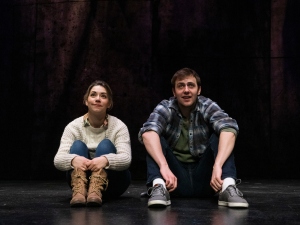 Theirs is not an inconsiderable achievement in a scant week’s rehearsal. Lungs doesn’t have a set or props or costume changes, true. But at 90 continuous minutes, it takes a daunting amount of lung power: it’s full to overflowing with words, edgy shards and cross-hatched fragments. And there are no breaks or even pauses between scenes. Understandably, Porter and Tkaczyk had scripts in hand on the re-scheduled opening night even if they weren’t tied to using them.

The script by Macmillan (whose Every Brilliant Thing is part of the upcoming Citadel season), is a window into an anxious generation, one that operates routinely at red alert — vis-à-vis the planet, the environment, and the all-absorbing self. And it charts the rocky course of a relationship that’s relentlessly, neurotically, self-questioning in its assessments of the political as it rubs up against the personal. How do you know if you’re doing the right thing about the planet and the fate of humanity? Is it more moral to refuse to procreate and bring a new lost person into the environmental disaster of the world — if thereby you’re leaving procreation exclusively to the kind of people who don’t even read much less recycle and just aren’t as thoughtful as you?

The most volatile (and voluble) of the pair is W, a smart, confrontational, and unstoppably wired PhD student in something worthy like environmental studies. And Porter, a magnetic actor, is riveting and funny in her breathlessly one-sided self-torturing, ranting “conversations,” continually readjusted with second thoughts about the world, the doomed environment, sex, climate change, parenting and parents, feelings over logic…. W wants her emotional needs anticipated and met without having to ask, but she doesn’t know what they are.

As M, a musician without a regular (sorry I mean, corporate sell-out) job, Tkaczyk captures the way M, conciliatory by nature, is always stranded a beat or two behind W’s ricocheting train of thought. He veers between bewildered and exasperated; his hair is always a little bit standing on end, which may be a sartorial representation of his footing in the relationship.

The actors are already into the crazy pellmell rhythms of an impatient piece that can’t be bothered with creating fictional spaces on the bare stage. And they’ll be more confident as the run continues.

Time can’t be stopped, or separated out into manageable bits. It’s night-time it’s morning then it’s night again it’s months later, or years. And in the last quarter of the play, where an actual plot kicks into the love story, events over the course of a lifetime are telescoped in a rush.

Are we actually good people? Is it enough to “support smaller coffee shops instead of chains — even when it tastes like dirt?” Lungs, which has a kind of twitchy, itchy brilliance about it, wonders about wondering about that. There’s an originality in that.