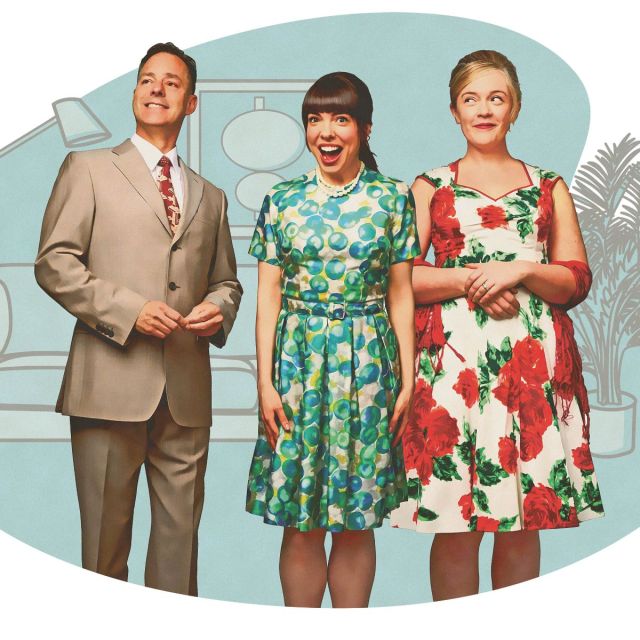 A Likely Story, says playwright Stewart Lemoine, “is one of those titles you have to Google because you can’t believe it hasn’t already been used.”

That puckish name, with its tantalizing whiff of skepticism, now belongs to the new Lemoine comedy that launches Teatro La Quindicina’s 37th season next week — a lineup that includes two Lemoine comedy revivals and a vintage psychological thriller.

In A Likely Story we meet five characters, strangers in a train station, finding their way into a play they’re creating by the choices they make and the information they get, moment by moment. Are they travellers? If so, where are they going? And why?

“In a way they have a parallel experience to what an author goes through, writing a play,” says the playwright of his latest in a career of reinventing comedy in new shapes and colour palettes. “It’s comparable to decisions I’d make writing a story.”

The new travel comedy begins with a prologue (Jeff Haslam) and a question from a quizzical character (Mathew Hulshof): “Can you tell me where I am?” Clues accumulate, along with characters (Vincent Forcier, Jenny McKillop, Rachel Bowron), as Lemoine explains after rehearsal last week. And so information gathers bit by bit, “defining who they all are and where the train goes….”

His “theatrical and narrative experiment,” as Lemoine puts it, began with his writer’s question to himself: “What would it be like if characters had to improvise, characters trying to make their world more finished, more real, more interesting?” As the prologue has it, “this is not about what happened, because no one can tell you what happened. And it’s not about what will happen, because nobody knows. It’s what could happen.”

A Likely Story runs Thursday through June 22 on the Varscona stage.

“The party slot” in the Teatro summer season (July 11 to 27) — occupied in summers past by plays as widely diverse as The Ambassador’s Wife, Cocktails at Pam’s and The Importance of Being Earnest — returns to a psychological thriller Teatro did some 30 years ago at the Fringe. In Maxwell Anderson’s 1954 The Bad Seed, a Broadway hit and two years later a “camp classic” movie, the placid American ‘50s middle-class facade — devoted spouses, adorable offspring, lovable upstairs neighbours — is disturbed by a mysterious drowning on a school picnic. Ah, and uneasy thoughts of inherited evil.

“We were so young and the characters were much older,” grins Lemoine. “There’s a fine line between period melodrama and ‘this could be funny if you don’t do it right’.” There’s a reason that drag queens have long been attracted to the play and the movie, and the extravagance of the ‘50s acting style.

“We thought of it at the time as a camp comedy,” he says. “And there’s certainly comedy in it. But I understand it better now. And it struck me as an interesting exploration,” to revisit the piece. Not least because Lemoine is more convinced that the mother Christine (Nicola Elbro) is the central character, “unravelling the more she learns about her daughter,” as he says. “Every scene brings bad news, and she’s trying so hard to be a poised ‘50s wife and mother.”

“Christine has a big problem. And the men in the play are interchangeably ineffectual at helping.” It makes sense, thinks Lemoine, to reimagine this classic with a more contemporary performance style, and the men played by actors who double in the roles. In the eight-actor production (the largest cast of the season), Mat Busby, Jeff Haslam, and Mark Bellamy play multiple characters. The all-star cast includes Andrea House and Kristi Hansen. And making her Teatro debut as the little girl is Lilla Solymos, startlingly impressive as the gravely determined heroine in the Citadel production of Matilda this past winter.

Mathew Hulshof and Luc Tellier in A Momentary Lapse. Photo by Ryan Parker

With A Momentary Lapse, which plays the Fringe and beyond (always part of Teatro’s summer season) the company returns to a 2005 comedy jointly created by Lemoine and actor/playwright Jocelyn Ahlf, “at my kitchen table,” as the former says. Two characters, unlikely collaborators, find themselves together in enforced community service to atone publicly for their infractions of the Criminal Code.

Ahlf herself, the star of the Plain Janes’ recent production of Fun Home, is now the right age for the role originally played by Sheri Somerville. Louise Trent is a 40-ish over-achieving multi-tasker with two kids, who’s a Hansard typist at the Legislature, a Lancôme salesperson at the Bay, and she plays in the Metropolitan Community Orchestra. Arthur Pomeroy (Luc Tellier in the role originated by Farren Timoteo) is an exasperated high school student. In fact he’s “the most exasperated person ever; he wakes up exasperated, and stays that way,” as Lemoine says. The Law (originally Haslam), in all its various glorious authority incarnations, is played by Mathew Hulshof. A Momentary Lapse runs August 16 to 31.

The season finale is a return to Lemoine’s 2002 screwball comedy Vidalia, named after the sweet Georgia onion and containing, fatefully, three identical briefcases.

Vidalia has the requisite screwball ingredients, thinks the playwright: “the escalating calamity, people back and forth between locations, an instigator who never stops having a good time, even when the stakes get higher and people get angrier….” Someone gets hired to take a briefcase to a certain location, and leave it there. And, oops, the wrong briefcase gets left. A crescendo of chaos ensues.

Why “Vidalia”? “I was attracted to the word,” says Lemoine. “And the Food Network was new at the time…. In the play it’s a code word, mistaken for someone’s name.”

The rules of comedy change dramatically in the cellphone era, as Lemoine points out.  And a three-briefcase screwball is a challenge to begin with. “It was so nerve-wracking to write, to follow (exactly) who knew what, when,” Lemoine laughs. Suddenly in rehearsal, I’d say ‘Stop!’ Everybody! I think I’m wrong.” A review of which briefcase was in whose hands would follow.

Written and directed by: Stewart Lemoine