Things I learned at the Sterling gala: a selection 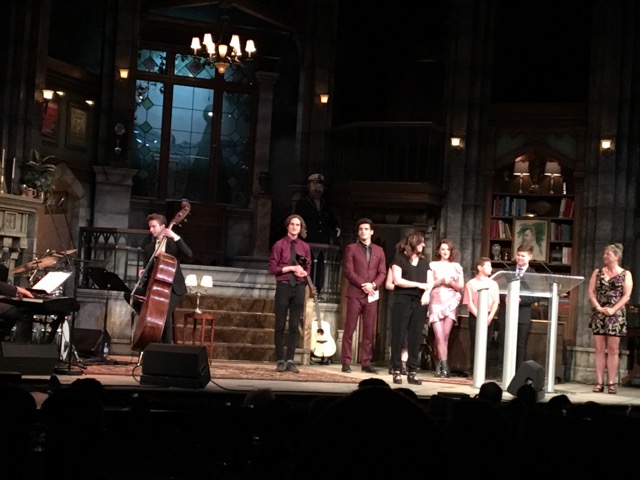 Sterling Awards night on the set of the Mayfield’s Sleuth.

A few things I learned at the Sterling gala, written by Belinda Cornish and directed by Kate Ryan, starring co-hosts Mathew Hulshof and Gina Puntil:

•The Sterlings spilled their secrets on the grand, lavishly appointed set of the Mayfield’s current production of Sleuth: i.e. the posh country house of a very well-heeled writer of murder mysteries. The invariably droll and witty Mark Meer, who presented the musical director and score Sterlings alongside director Suzie Martin and actor Oscar Derkx, noted from the stage the sheer excitement of being on a set where “we might all be murdered. At any time. With any object.”

Mathew Hulshof, a wry and funny co-host along with Gina Puntil, pointed out the working aquarium AND the portrait (of Laura Dern, he said) over the fireplace. All firsts for the Sterlings, along with the ASL signing throughout.

•I missed the opening number, but at intermission people were still buzzing about a terrific version of Make Your Own Party by the eerily talented St. Albert Children’s Theatre. The lyrics seem specially tailored to Edmonton on Sterling night, and the improbable but dramatic truth that we are a theatre town:

“Sometimes it seems that dreams may escape but/ What’s round the corner you never know/ Don’t pack it in just make your own party…. If there’s no script, then write your own show.”

Right, in a way that’s exactly what we’ve done in Edmonton.

•You already know this if you’re a theatre-goer, but composer/ musician/ improviser Erik Mortimer sets the bar high in empathy, responsiveness and wit. He led the Sterling Awards Orchestra from the keyboard. And they were terrific. Dave Clarke, creator of Sterling-winning Songs My Mother Never Sung Me paid tribute to Mortimer, his musical director, as the one who helped him write down the score, a particularly tricky challenge since the story is about the hearing son of a deaf mother.

•Shows I wish I’d seen and now it’s too late, damn, so now I have regrets and have to hope they get remounted: Jana O’Connor’s CTRL-ALT-DEL, for kids, in a Concrete Theatre production that looked great in the video montage. She’s a funny writer, with a light smart touch (witness her screwball comedy Going Going Gone for Teatro La Quindicina). How  did I miss it?

•I was struck again by Lawrence Libor who along with his Once castmate Emily Dallas delivered a lovely version of the musical’s bookending number Falling Slowly at the top of Act II. Libor, along with his guitar a recent arrival from the U.K., is in the Citadel’s first summer musical Ring of Fire, opening in July.

•The Plain Janes’ memorable account of Fun Home, the evening’s most awarded single production (including the Tim Ryan Award for outstanding production of a musical), was referred to by the Janes’ artistic director Kate Ryan, by director Dave Horak, and by musical director Janice Flower as “a show like no other.” A bonus for us Monday night: Jillian Aisenstat, as the youngest of the three Alisons at different ages, reprised her killer version of one of the musical’s great songs, Ring of Keys. Evidently, a young actor to keep your eye on.

•Hunter Cardinal, nominated in the leading actor (drama) category for his highly original Hamlet, accepted the outstanding new play Sterling Award for with co-creator Jacquelyn Cardinal, his sister. He opened in Cree, fought back tears, and later returned as a presenter (of the indie production Sterling) with Matt Schuurman: “I promised to speak less Cree and cry less,” he assured us.

Accepting his leading actor Fringe Sterling Award for his performance as Jerry in Albee’s The Zoo Story, Collin Doyle had co-star and long-time buddy James Hamilton with him onstage. The fine Sterling-winning Fringe production directed by Bradley Moss was, he told us, the third Zoo Story he and Hamilton had done together. The first time was in high school. Then came a Fringe production in 1993. And now another, “when we’re finally the right age to play the characters.” It was, says Doyle, “my first time onstage in 10 years.”

Naturally, Ken Agrell-Smith, the drama teacher/ mentor/ theatre aficionado who passed away this season, had seen the show, said Doyle. Naturally, he’d provided praise and criticism, helpful no-bullshit notes. Naturally, he did the same for reviewers like me — “wow, you really missed the mark there, Liz” or “good turn of phrase but wrong point of view.” Or the all-purpose “WHAT were you thinking?” He was fun to argue with, and to learn from — an ubiquitous presence in theatres. And they seem very empty without him.

I find myself looking over my shoulder at the Varscona, for example, hoping to catch his eye stage left, near the top. Edmonton theatre will keep missing him. I know I will. 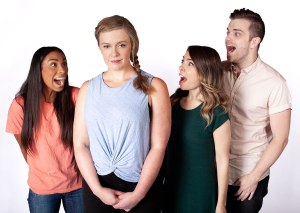 •Playwright Stewart Lemoine, whose lively, unusually structured comedy A Lesson in Brio was voted outstanding Fringe new play, explained that last summer he’d “decided to appoint myself the ambassador for vivacity.” Early in rehearsals for the show, his dad had passed away. And Lemoine spoke movingly of the way the fun of the ensuing rehearsals had been indispensable, the best kind of consolation. “I laughed so hard I almost made a sound.” 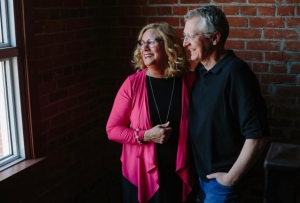 The DCs, Tami and Greg Dowler-Coltman, arts educators who have had so much to do with inspiring the creativity of generations of young artists, were charmingly introduced by their three sons,— Jordan, Braydon, Tim, all artists, all gifted. The couple spoke of mentorship, and the name Agrell-Smith came up again and again.

Jason Hardwick, working in Vancouver, wasn’t on hand to accept his leading Fringe performance (comedy) for his work in the new Darrin Hagen/ Trevor Schmidt comedy Don’t Frown At The Gown. His message of solidarity to cast-mate Jake Tkaczyk, onstage to accept the award for him, was “I promise I’ll always be there to put on your eyelashes for you. You have never learned!”

•Sterling-winning director Horak spoke feelingly of “learning so much” from the Fun Home cast, an the “dream come true” of working with Jeff Haslam.

Merran Carr-Wiggin, Cole Humeny, Bobbi Goddard in What A Young Wife Ought To Know, Theatre Network. Photo by Ian Jackson.

In accepting her supporting role (drama) Sterling for her fierce, vivid performance in What A Young Wife Ought To Know (in Bradley Moss’s Theatre Network production), Bobbi Goddard put her finger on the amazing, and disturbing, reality that Hannah Moscovitch’s story about poverty-stricken Irish immigrants in the 1920s who pay a big price for love hasn’t grown old. The desperately high stakes remain in place for many women. And there’s a drift backwards, as we’ve seen, in women’s reproductive rights and their very identity as sexual beings.

•There was much chatter, pro-, con-, and undecided, about the potentially problematic division of performance categories into Comedy and Drama. Discussion is invited.

Meanwhile, have a look at the full list of Sterling winners HERE.