Finding yourself at Found, the festival of art in unexpected places 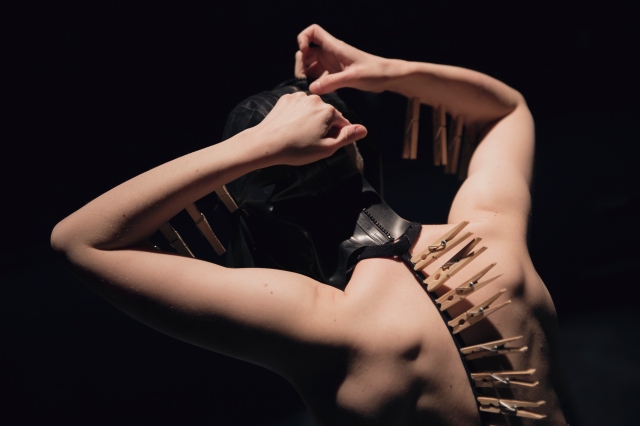 How To Self-Suspend. Photo from High Performance Rodeo.

Finding art, and artists, in places you never expected to run into them: hey, Edmonton has a festival for that. 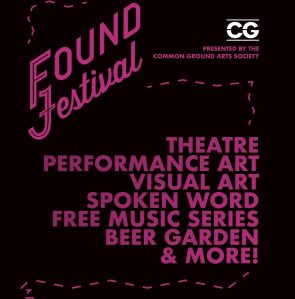 With the return of the Found Festival Thursday, for an eight annual weekend of surprising encounters in Old Strathcona, you’ll find yourself up close face to face with experimenters any place but a conventional theatre or gallery or recital hall.

In previous Found editions, you could have found yourself in a grocery store, or a hair salon, or a public bathroom. This time out you might find yourself at an illegal underground film party in someone’s apartment, for example. Or at a film festival projected on an apartment window. You could be wandering in the river valley, and find yourself in the midst of an art installation cum dance/ movement experience exploring the meaning of water. Or on an audio tour of locations you don’t know in advance, immersed in the secret side of urban life: real-life memories of real-life Edmontonians.

You can never predict what might happen when Found brings art to you; that’s the excitement of it.

As the festival’s artistic director Beth Dart, a specialist in site-specific theatre, puts it, “it’s all about the audience/ performer relationship. And that changes when you bring art out of conventional venues and into the community….”

“This is about breaking the known contract with the audience,” says Dart of the array of Found “shows” created for specific locales. “These artists are investigating how to re-negotiate that contract…. All the pieces really destroy the fourth wall,” she says the conventional frontier between the worlds of stage and audience. But, don’t fret, it’s not an invitation for the dread “audience participation” either, Dart reassures.

Here’s a sampling of five finds at Found:

Secret City: Heather Cant of Phenomania teams up with Wayne Paquette of Blarney Productions to bring an Edmonton incarnation of her bright idea to Old Strathcona for the Found Festival. Secret City gathers personal memories from actual Edmontonians for an audio walking tour, a sort of personal confession/ theatre fusion presented in each of five 10-minute episodes by a local actor: Robert Benz, Darrin Hagen, Mac Brock, Erin Laflar and Nisha Patel (Edmonton’s newly appointed poet laureate). Secret City premiered in Kamloops, got tried it again in Vancouver. And now it’s Edmonton’s turn for an unexpected urban vision of itself. Get yourself a map and a listening device outside the Backstage Theatre, and set forth on an “audio adventure.”

In Camera: in Bevin Dooley’s immersive drama you’ll find yourself attending an illegal, and dangerous, film party in an apartment in Romania in the final days of the Ceausescu regime in the ‘80s. Dooley developed the piece in her time as Common Ground’s 2019 Fresh AiR (artist-in-residence). Heather Inglis of Theatre Yes directs an all-star cast of seven. Catch 12thnight.ca’s upcoming post on Dooley, a fearless young artist whose history with the Found Festival includes one-on-one encounters with an audience for whom she undertook to write, on the spot, a custom-made scene, prose chapter, or poem.

Gorgeous: An improv experiment that takes the notion of ‘site-specific’ to the ultimate. Instead of asking the audience for a cue that includes a theoretical location, two Rapid Fire Theatre improv stars, Jessie McPhee and Gordie Lucius, are taken blind-folded to a mystery location. And then they improvise.

Woven Water: This performance art/ movement piece takes you through Indigenous land in the river valley, where you’ll experience personal storytelling and an original art installation, all inspired by qualities of water. Barry Bilinsky, Dawn Marie Marchand, and Ayla Modeste are featured.

How To Self-Suspend: the Found Festival’s first show ever in a “conventional space,” albeit one without chairs or risers in which the performance happens amongst the audience. It’s by Mx. Sly, a performance artist who’s performed the X-rated piece at both the High Performance Rodeo in Calgary and the Rhubarb Festival in Toronto. Billed as “part storytelling, part movement piece, part photo-essay, part rope bondage demonstration,” it chronicles in a non-linear interactive way the artist’s traumatic childhood story. It happens in the Studio Theatre at the ATB Financial Arts Barn.

And there’s much more. There’s roving spoken word (Found Glory). There’s an art installation (People on the Path) of giant portraits designed to undermine the mythology of The Albertan. There’s experimental film (Wind-O-Vision) that plays on an apartment window, with a live sound track. And there’s lots of free music, curated by Double Lunch Productions and Sweaty Palms. Check out the lineup and the schedule (and get tickets) at commongroundarts.ca.

Did I mention finding the beer garden?