They do! Chase and Christina tie the knot, in a Fringe show 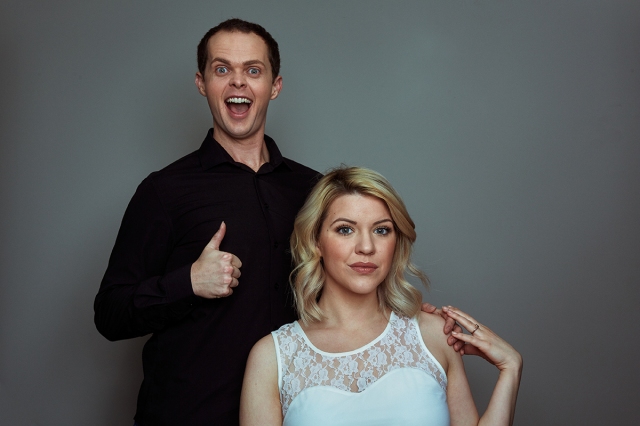 It’s a love story for the ages. They met at the Fringe after the late-night cabaret. On Aug. 23 2017, “I yelled at him outside Steel Wheels,” says Christina Garies of her fiancé Chase Padgett (Chase Padgett: Heart Attacks And Other Blessings, Six Guitars, Nashville Hurricane).

On Aug. 23, 2019, at 8:30 p.m., Chase Padgett and Christina Garies are getting married at the Fringe, in the Garneau Theatre (Stage 20). Their wedding is a Fringe show, Chase Padgett Gets Married, and (no pressure) it runs for one night only. Of course it does. It’s a wedding, for gawd’s sake.

You don’t need to buy them a blender (my go-to all-ages vegetarian-supportive wedding present), check out the bridal registry for their cutlery pattern, or get blotto with a bridesmaid. But you do need to have a ticket.

No wonder Garies is in speed-up mode. She’s pulled the plug on her NGO job. Her lease is up at the end of the month, so she’s packing up her Edmonton apartment to move to Vancouver.

This “pre-honeymoon summer” Garies has already driven from Padgett’s home turf in Florida (“Chase showed me his high school in Naples”) and the Orlando Fringe back to Canada, and then from Edmonton to Winnipeg for Padgett’s “other” Fringe show, the one that includes him getting a heart attack whilst performing on a cruise ship. “Vancouver (Washington) is our ‘purgatory’ until my visa comes through.”

You see what can happen when the question “wouldn’t it be funny if…?” floats through the air — and, like Garies, who’s a long-time Rapid Fire Theatre improv fan, you’re very apt to say Yes! to promising comic suggestions. Heavens, you could find yourself directing and producing your own wedding. And the flowers, the pedicure and the right underwear for your dress will be the least of your problems, way down the list from getting the posters printed.

Romance, as we all know, is a delicate cosmic arrangement of near-misses, as the ebullient and good-natured Garies concedes. “We met at a not-good time for either one of us,” she says. “I was unavailable. He was not ready to date…. But it was only a matter of time.” The universe, for example, had to cough up a BYOV. Does BYOV really mean Bring Your Own Vows?

There are four flower girls. One is an adult. “She just wanted to be one,” says Garie of her friend Beatrice. It didn’t even occur to Garies to demur.

The wedding entertainment features Padgett and Garies’ friends, some of the Fringe’s most dexterous and accomplished performers, They’ve very connected: God will host (as Garies points out, “it’s only right”). The MC is Mike Delamont, of God Is A Scottish Drag Queen fame (in fact, his show God Is A Scottish Drag Queen VI happens at the Garneau post-wedding at 11:15 p.m.). The cabaret after the ceremony features such Fringe stars as Christine Lesiak and Ian Walker of Here’s To Science, the sketch comedy duo Marv n’ Berry. “Chase’s Auntie Ann, who used to be a lounge singer, will sing something.”

“Six minutes of vows, then a cabaret,” says Garies cheerfully. “And all our friends get to be part of it…. Very silly and very us. But I’m still getting full bridal stress.” She permits herself a sigh.