And the dinos sing and dance: Triassic Parq, a guest 12thnight Fringe review by Alan Kellogg 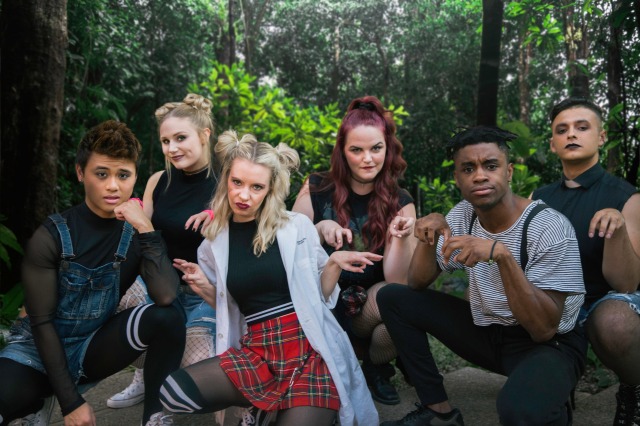 Among other winning attributes, the Edmonton Fringe affords audiences the chance to witness previously produced shows unlikely to be staged here during the regular theatre season (if there is one any more).

Appropriately enough, this ribald (!) musical was first hatched at the 2010 New York Fringe, where it picked up a best musical award. Things didn’t go so well when, tweaked a bit, it moved on to Off-Broadway, and while taking nothing away from this production, you can see why.

The premise is very tempting –  that is, a take on Jurassic Park from the dinosaurs’ POV. In  fact, it’s both more and less of that intriguing set-up. More, and even more timely than at its creation, given the issues of gender identity that loom so large today. Less, in that the notion of the dinosaurs’ perspective on things (if you buy in) isn’t really addressed here in its potential fullness, whether silly or serious.

To wit: this theme park on an island off the coast of Costa Rica showcases a pen — surrounded by electric fences — of mostly laboratory-created (The Lab as God) female dinosaurs, who have invented a singular society. That small world is overturned when TRex 2 (Alyson Horne) one of the inmates, sprouts a penis. Chaos ensues, as they say. The people on the outside are armed.

It’s all a bit much, and I have to say years of analysis have failed me in taking balloon male appendages seriously. Or comically, if that’s the idea. That said, there is real talent on the stage (kudos for the live band!)  and while the book is weak-ish, there are some quite likeable songs here, matched by strong individual performances and ensemble work. Velociraptor of Innocence Mark Sinongco’s vocals were particularly impressive, and he wasn’t alone.

The packed audience loved it. It’s been a good year in Canada for raptors.