Full of sound and fury and signifying … you know. I Hate Shakespeare!, a guest 12thnight Fringe review by Marc Horton 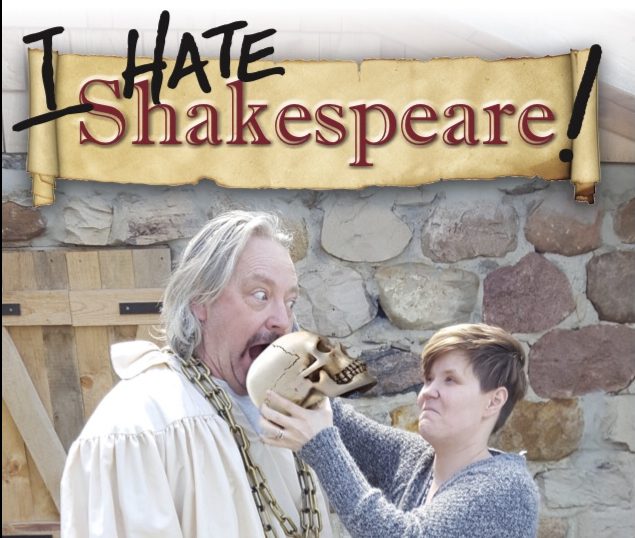 When Hamlet and Laertes face off at the end of Act V and engage in swordplay that will see bodies litter the stage, the would-be ref in the scrap judges one sword thrust as a “hit, a very palpable hit.”

I judge I Hate Shakespeare!, a 75-minute spoof that seems much, much longer, a “miss, a very palpable miss.” The six-member cast struggles, and struggles mightily, but to little avail before it all comes to a welcome end.

I checked my watch at about minute 20 and then regularly from then on. Trust me, the hands on my timepiece crept on at a petty pace from minute to minute to the last syllable of would-be satire.

The show is predicated on the fact that to many these days, the Bard is too wordy and the words he uses are too, well, old. (That criticism is, of course, silly. It’s akin to saying Mozart used too many notes or Rembrandt too much dark paint.)

Some parts of this skit-ish show come close to working. the cleverest of the lot involves bottling Shakespeare’s wit where come-uppance quips spew forth after gulping the equivalent of literary Red Bull. It works, and at least made me smile.

But another where Juliet appears on a dating game show was decidedly dated and shopworn. Ditto for another that lamely tried to use Jerry Springer as a hook. Who, pray, watches Springer anymore? Is he even a thing nowadays?

And a skit that attempts to mine Titus Andronicus for jokes doesn’t work either. It’s the Bard’s most bizarre play that involves hands, feet, tongues and heads being lopped off. There are folks ground up and baked into pies, and one hapless character buried chest deep and left to die of thirst and starvation.

Titus Andronicus is goofy enough all by itself. It doesn’t need help.

Unfortunately,  I Hate Shakespeare! does need help. The whole thing seems overwritten and sadly under-rehearsed. The timing too often lacks the rhythm that might have given some of the scenes more bite.

I didn’t hate I Hate Shakespeare!, but I sure didn’t like it much either.

– Marc Horton is the former movie reviewer at the Edmonton Journal. His favourite Shakespeare-on-film is Laurence Olivier’s Richard III which proves he has an absurdly forgiving nature when it comes to hammy performances.