The anti-rom-com rom-com: You Are Happy, a Fringe review. 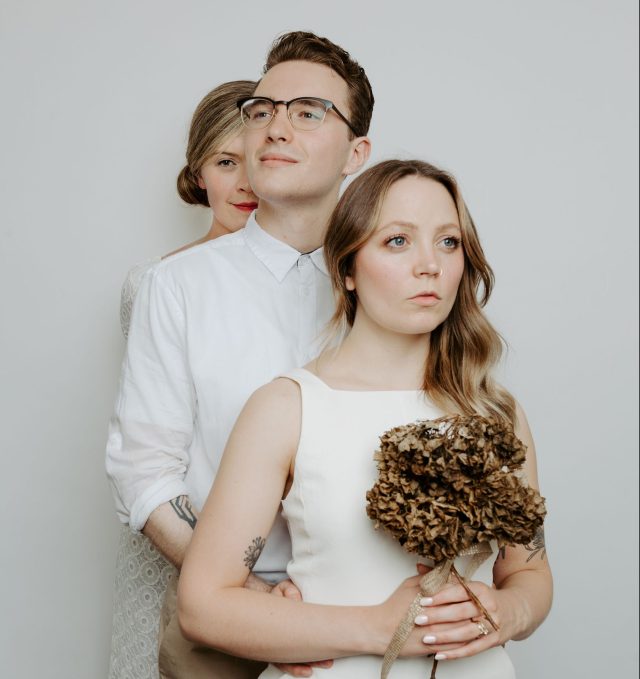 There are two kinds of people in the world, as Bridgette (Jenny McKillop) briskly explains in this sour, tart little fable by the young Quebec playwright Rebecca Deraspé. And the grid is lop-sided.

There’s the 92 per cent of the human population “who need to be two to be happy,” she explains. And there’s the 8 per cent who don’t.

Since the play opens with Bridgette’s brother Jeremy (Jezec Sanders) in her closet, holding a noose and preparing to use it, he’s obviously single. Why else would a young man who knows how to sail want to commit suicide?

His sister, a paid-up member of the 8 per cent, undertakes his rescue, — by going shopping for a partner for him. Naturally, she looks in a supermarket, where singles feel most like outsiders. In the great collective dream of finding the perfect life partner Chloe (Madelaine Knight) has nearly given up. Which makes her susceptible to Bridgette’s project.

One two-year contract later, Chloe and Jeremy are A Couple. And, lo and behold, against the odds, it’s true love, or a reasonable facsimile. Which is all you really need not to end up in a closet, or feel like a total loser out in the world.

April Banigan, one of our experienced and versatile actors, makes her directing debut with this acrid little tale of love constructed from scratch, like a puzzle or an equation. And her production, with its trio of charming actors, goes for a bouncy, bright, shiny performance style: the premise is that the characters assume they’re in a rom-com even though they’re really not.

McKillop’s Bridgette never stops beaming, as she lays down the law: a fairy godmother with a steely side. Sanders’ amusing Jeremy commits the odd masculine slip-up, but he learns how to make up for it with romantic gestures. He’s a quick study when it comes to dietary preferences, for example. And he’s hip to the salutary effects of neck massages at moments of crisis.

And, as the pushover Chloe, whose reservations about the creepiness and improbability of it all are easily overcome by her romantic neediness, Knight captures the sense of a character torn between amazement and delight. Chloe retains vestiges of skepticism, in the self-deprecating little laugh she attaches to the end of every line.

Banigan’s Blarney/ Dog Heart production enjoys the theatrical style of a comedy that’s about the artifice of love. The characters look us in the eye, and set the scene. “I’m in the elevator, and you’re in there with me.”

Is enforced couple-hood, nailed down with research, a workable solution to life’s great conundrum, i.e. happiness? It’s probably revealing that the original French title, Deux Ans De Votre Vie, literally “two years of your life,” is translated in English as You Are Happy.