A rare backstage pass: E Day takes you behind the scenes of an election. A review of Jason Chinn’s new political comedy

“Welcome! Thanks for volunteering your time,” says a bright young woman with a smile and a clipboard as you enter the theatre.

You’ve wandered into a cluttered makeshift office (designer: Beyala Hackborn, lighting by Scott Peters), the kind of temporary operation thats rent space in anonymous strip malls: cheap-o coffee maker and supplies (with sign that says MAKE SURE COFFEE POT IS TURNED OFF AT THE END OF THE DAY), jars of pencils, laptops, water dispenser, fold-up tables, a notice board with clippings, maps, calendars with tear-off pages: “E minus 24.” You feel you might have to answer one of the phones; they’re within reach and everyone else is busy.

Suddenly, you’ve arrived in 2015 — at a political pop-up. And you have a backstage pass to grassroots democracy at work.

Chinn’s play goes behind the scenes at an event of historical reverb in the history of Alberta: the election that, against all odds (and media prophecies), swept the NDP into office in a landslide. As the brisk office manager Amena (the amusing Amena Shehab) puts it, in a rare moment of wistfulness , “just once I would like to feel what it’s like to win.”

And what is behind the scenes in politics, anyhow? Dave Horak’s captivating Serial Collective production — with its configuration in the round and its unusually ample acting ensemble of 12 — immerses you, in detail, in a perpetual motion machine. Welcome to an NDP constituency office in north Edmonton, on the countdown to the big day.

“Immerse” is the right word, both for the play and the production. We surround the action, up close. And, like the new volunteers we are, we meet many people we don’t know, all at once. The characters, whose names are the actor’s names, are in the middle of something and they never stop moving — busy on the office phone, ending cellphone calls from the private lives they’ve put on hold, writing things down on little bits of paper they give to someone else to write on bigger bits of paper, re-organizing assignments on the fly, making coffee, drinking coffee, picking up snacks, arguing about snacks, bickering about the staff hierarchy and division of work, leaving to canvass, arriving from canvassing….

They seem to be short of time, and they certainly don’t stop to explain who exactly they are. They have a script for this play within a play. “I’m so glad we can count on your support. Can we drop off a sign for your lawn?”

Gradually, a full-bodied human comedy emerges in E Day, peopled by individuals who, like “voter contact organizer” Sheldon (Sheldon Elter),  the harried guy in charge and the candidate’s best friend, have life partners they never see. Or union jobs at Safeway, like volunteers Lora (Lora Brovold) and Sue (Sue Goberdhan). Or jobs they used to have, like the candidate herself, Candace (Candace Berlinguette), a kindergarten teacher who saw kids in need of “just a little bit of help to get that leg up,” as she says when she has a moment later to remember her original motivation for unleashing chaos into multiple lives (including her own) by running for office.

Rachel Notley is, needless to say, a big player in this world of non-stop movement. She makes a brief appearance as a character (Beth Graham in a blond wig). And at Friday’s performance the former Premier was there in person in the audience, roaring with the laughter of recognition or grimacing sympathetically.  Actually, it seemed to be a little bit of both simultaneously as the show opens in an argument ignited about a Tupperware of spaghetti missing from the group fridge. You’re close enough to hear Sheldon grinding his molars, or was that my imagination?

It’s a community of veterans (“this ain’t our first rodeo”) and newcomers thrown together by a common goal, an extended family of sorts that actually includes a mother and daughter, as it turns out.

In a world where the big things, like NDP victories, seem unlikely, aggravations get momentous. When the improbable starts to get less and less unlikely, suspense builds. And with suspense, tension, as Horak’s production chronicles in a sneaky, sweaty, incremental way. You may know (or think you know) the outcome of it all, but you find you care about the characters, like the novice phone canvassers David (Singai David Madawo) and his prickly table-mate Asia (Asia Bowman). Or Sheldon’s ever-smiling assistant Kiana (Kiana Woo).

In the texture of workplace relationships created so compelling in the production, there are setbacks. And they add up to a plot. NDP lawn signs keep mysteriously getting knocked down. The candidate’s restaurateur spouse Beth (Beth Graham) is volatile, a loose cannon who panics under pressure and will probably need therapy after the election. It makes you wonder about her restaurant.

The arrival of the first outsider, an election day organizer who arrives from Vancouver by bicycle with talk of chakras and a list of food allergies (Linda Grass), is funny. The arrival of the second, an arrogant Toronto campaign manager (Ian Leung) with a past and an agenda, is more threatening, a bona fide crisis. 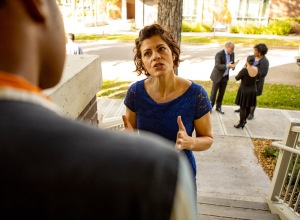 Berlinguette, an actor of huge emotional openness, turns in a  revelatory performance as the candidate, in a luminous state beyond fatigue. Candace seems to have washed up on an unfamiliar shore, struck by a sense of the unreality of a roomful of people working their butts off on her behalf, clinging to familiar bits and pieces (her mom’s vintage crockpot for one). She watches herself teeter precariously between panic and despair.

As the practised hand at motivating campaign volunteers, Elter is droll and affecting as Sheldon. He sees his organizational task as part logistical (the reshuffling of never-quite-enough volunteers), part encouragement, part turning setback and incipient chaos into a workable challenge. Ah, except when it comes to his stalled relationship with April (April Banigan), the director of the leader’s tour and his life partner.

The ensemble is strong, convincingly natural in its dynamic and rhythms. May I single out Shehab as Amena, a Canadian of recent vintage and the only character who shows up for work in high heels? Shehab, who breaks into Arabic from time to time — you’re convinced you’re learning the Arabic for “you have got to be friggin’ kidding me” — is propelled around the office on a jet stream of exasperation.

It’s a fascinating group portrait, painted at a startling moment in the history of a province (in)famous for its resistance to political change. On the eve of a federal election of shameful vulgarity, consider this. In a country where topical political theatre has been in short supply, a playwright known for his specialty in absurdist black comedy has put his heart on his sleeve, with this ode to the little guy, citizens who work their butts off in unseen stop-gap offices to get democracy up on its feet and moving.

To the theatre (and the polling booths), my friends.

Where: Theatre Network at the Roxy, 8529 Gateway Blvd.