Waitress the musical, serving up the special (a slice of possibility). A preview.

David Socolar is a man on an unusual journey. He’s in the enviable position of travelling the continent surrounded by women (and baking metaphors). 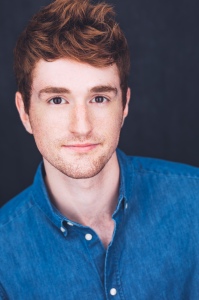 The 26-year-old Baltimore native is on tour in a 2016 Broadway musical created, directed, and produced by a history-making team of women. And he’s in a story where the central character and her comic sidekicks are women.

The musical is Waitress, which arrives Tuesday at the Jube in a Broadway Across Canada touring production that officially premiered earlier this month in Vancouver. The music and lyrics are by Grammy magnet singer-songwriter Sara Bareilles, the book by Jessie Nelson (from the 2007 Adrienne Shelly movie), direction by Diane Paulus, choreography by Lorin Latarro.

It’s the story of small-town diner waitress Jenna, pie-maker extraordinaire and abused wife dreaming of an exit strategy, who puts her unappreciated all into her exquisite baking. Socolar plays appealing Dr. Pomatter, the OBGYN who ignites Jenna’s long-buried sense of self when they start an affair. “If pies were books yours would be Shakespeare’s letters,” he sings.

A couple of weeks ago, we caught up with the genial Socolar in final rehearsals in Boise, Idaho. And he mused happily on “a powerful story,” a heroine with “such real and relatable troubles,” and his own part in it.

“My character comes in as a lesson to her, more than anything else,” he says of the good doctor. “And there’s a lot of self-discovery in that.” Dr. Pomatter is not without his dimensions or his back story, “a man from humble beginnings who gets wrapped up in the high-class doctor culture.” When he meets Jenna, it’s at a critical juncture (she’s discovered she’s pregnant). “It takes him back to a more carefree, less suit-and-tie time in his own life.”

“On the page he’s a guy who cheats on his wife, yes…. But there’s more. He’s very important to Jenna’s growth; they have a real connection. All she’s known is abuse, and in cycles of abuse you can convince yourself that’s how life is.”

His favourite song in the musical? You Matter To Me, the duet of discovery that Dr. Pomatter and Jenna share. “It’s addictive the minute you let yourself think/ The things that I say just might matter to someone….” Says Socolar, “it gets to the core of what we’re talking about: being important to someone means the world.” It restores a sense of possibility that’s been put on hold in Jenna’s rocky marriage.

Waitress isn’t the first time Socolar has found himself in a woman-centric musical — and it even represents a Canadian connection. He was in Anne of Green Gables, a new folk-rock musical adaptation of the iconic Canuck novel by Lucy Maud Montgomery that premiered at the Finger Lakes Musical Theatre Festival in upstate New York.  “My mom says I sang before I spoke,” laughs Socolar, who grew up listening to the classics, The Sound of Music, Fiddler on the Roof, and the rest before he went to theatre school in Connecticut. “‘I have confidence’ … I knew all the words!”

He loves the Waitress music by Bareilles, who has herself played Jenna from time to time. The style? “Definitely not Rogers and Hammerstein,” he says. “But it has the same function: the songs carry the story forward; they’re integral to the storytelling. And the lyrics are fantastic.”

To borrow from the show, “sometimes one bite is more than enough/ To know you want more of the thing you just got a taste of.” There’s a mantra for touring. As Socolar says, “to be in a musical that’s centred around women … it’s a good time for that to be happening!”

Written by: Jessie Nelson (from the Adrienne Shelly movie) and composer/lyricist Sara Bareilles