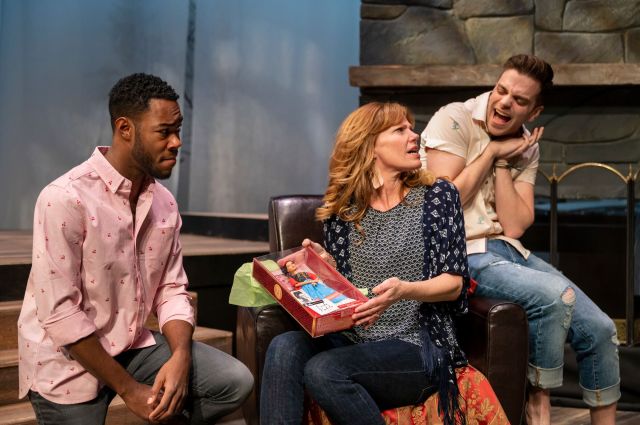 “I was saying my authenticity mantra,” declares a progressive bourgeois mommy at the start of Happy Birthday Baby J. Yes indeed, “authenticity” (and an assortment of other contemporary mantras) will be up for discussion, dissection, and dispute in the prickly new comedy by Nick Green premiering at Shadow Theatre. It’s well worth the catching.

Happy Birthday Baby J is what happens when a clever playwright adds a genuinely provocative new ingredient, with unknowable side effects, to a withering social satire of class, race, privilege. This new wrinkle is to be found in the multi-faceted sexual politics of gender — diversity and choice. Green’s comedy of manners comes with teeth marks.

The characters, practised self-deluders, are paid-up members of the upper-middle-class — the self-important intelligentsia who are down with they/them pronoun-ology but labour mightily to claim property rights in a brave new gender-less world they themselves do not inhabit.

Louise (Chantal Perron) is the fiercer, louder, mouthier half of a well-heeled white couple who have set about raising a gender-free kid. The other half, Gary (David Ley), is a word-strangled communications prof you’d peg from the outset as mild-mannered and long-suffering. Is he George to her Martha? It crosses your mind.

Anyhow, as the play begins he’s getting an earful from Louise, who’s unstoppably recounting a playgroup incident in which she paints herself as a heroic forward-thinker surrounded by less progressive mothers of obviously inferior children. It’s a very funny piece of writing for a character who’s desperately competitive about denouncing the competitive spirit. And in John Hudson’s production Perron’s performance creates a smiling cartoon monster of epic proportions (and, er, volume; Louise has no inside voice). Ley’s portrait of Gary, dry and wry, unravels into a jumble of awkward wordy professorial gab later. It’s a fine under-the-radar comic turn. 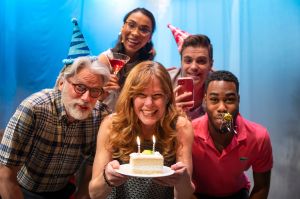 Patrick (Mathew Hulshof) bursts in, histrionically, with his latest boyfriend Karomie (Cameron Grant) and a string of humorous anecdotes from his disastrous dating history. Hulshof attacks the juicy role of the sassy gay guy — witty and malicious, the kind of double-entendre specialist progressive women adore — with real comic zest and expertise. And the chemistry with Patrick’s new beau, the bemused black outsider played with calm assurance by Grant, ripples with a tide of tensions that swell and disperse. Karomie’s goat can be got, witness a nearly peripheral scene in which he is roused to deliver a scathing attack on social media junkies, like his new boyfriend. 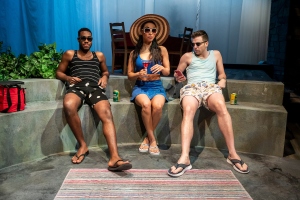 Megan, a bored young university lecturer who might be a house guest, has already arrived and will dissolve in wine and crantinis in the course of events. She’s played by Patricia Cerra, a virtuoso of the sideways skeptical glance.

White wine and specialty dips — and shifts in the power dynamic in duets, trios, and full ensemble scenes — ensue. So do revelations about relationships and family secrets and connections. And Happy Birthday Baby J joins the theatrical ranks where dinner, meant to be the traditional adhesive that holds the family and friendships together, turns out to be their undoing. It’s a series of self-analyzing monologues here, as befits the self-obsession of the characters, and is deftly staged in Hudson’s production. 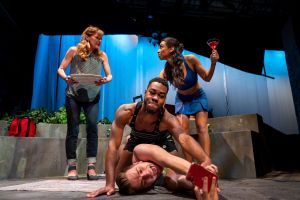 Green has a sharp ear for funny dialogue and the way smart people can manipulate jargon into the flow of conversation (hey, one of the benefits of a university education). And one of the impressive features of Happy Birthday Baby J is its gradual peeling back of buffed comic surfaces to expose an underbelly where disturbing currents of racism, misogyny, and homophobia ripple. Paul Morgan Donald’s score, with its undercurrent of ticking time, cuts to the chase.

And hey, back to Baby J and questions of their gender and the prospect of a new and gender-less generation. In a way, this escalating comedy isn’t in the end about judging the desirability of that. As for possibility, it seems, however, doubtful that J won’t be a hopelessly screwed-up person in search of a therapist, given his parents and the vanities of their relentlessly self-centred milieu. If social “progress” is in the hands of self-styled “progressives,” the kind of people who say of themselves that they’re “very sensitive to non-verbal signals,” the forward march of history might just be jogging on the spot.