The quest for happiness, one little item at a time. A review of Every Brilliant Thing, starring John Ullyatt, at the Citadel

This will seem a wintry, back-handed way to start a review. But there are many reasons in advance to dread Every Brilliant Thing. Not so much because the dark subject of death by suicide is involved (cf Shakespeare, the Greeks, and other purveyors of tragedy). But because of the potential for drowning in a sentimental sea of tears: self-help advice from life-affirming companion characters, or brave and plucky survivor characters.

No offence, shrinks, but there’s probably a reason the repertoire isn’t full of plays by mental health professionals. It seems to be damn hard to create a show with suicide in it that isn’t about suicide (this dark subject seems to overtake drama and pummel it into submission). But the English playwright Duncan Macmillan (Lungs) has actually succeeded. I brought an ample supply of Kleenex in my coat pocket. But I didn’t have to dip in, much.

Macmillan’s interactive 2014 play, which has a theatre full of people joining the cast of a solo show, is about a little boy whose mother is suicidally sad, and first tries to kill herself when he’s seven. For her benefit he starts a list of “brilliant things” that make life worth living. And the list, which doesn’t make her happy, grows and grows. It will even prove useful to the grown-up version of the little boy when he finds himself mired in sadness later on. “When I was younger I was so much better at being happy,” he says of his older self.

On entering the Citadel’s Rice Theatre, where Dave Horak’s genuinely captivating in-the-round production is happening, you have the chance to create a sticky tag with your own “brilliant thing” on it. On my list: shows that include suicidal depression that have a light touch on a black and mysterious subject, and turn out to not be about suicide anyhow, but about our valiant attempts to make people we love happy, and our guilt when we can’t. 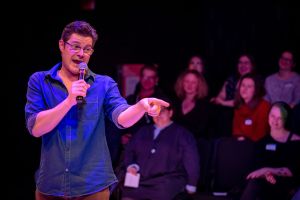 To see John Ullyatt embracing an audience with a kind of warm, genial, unhistrionic hospitality — and making them feel it’s well within their compass to participate by becoming characters or embodying props, or calling out items on a list — is to see a master actor and performer at work. It’s charisma, of the kind that doesn’t draw attention to itself as actor-ly.

Ullyatt dresses down for the occasion; brown cardigans, the kind you wear over your pajamas, are, as you know, the universal sign of depression. He treats all his audience volunteers with kindness, empathy, and gentle amusement that theirs is a shared assignment. And he works easily with what they each come up with as dad, the school councillor speaking through a sock puppet, the veterinarian who puts down his dog, his English teacher, or his first great love.

On opening night, every one of them was charming and looked good, and you had the sense they knew it. So then we could feel like a community of people who were doing a show together. It all seems closer to high-level improv than a play, though Macmillan writes in a witty, economical way.

The story emerges, in an unforced way, with numbered items read out by those audience members who’ve been handed cards by Ullyatt at the outset. #1: ice cream. #313 having a piano in the kitchen. #253,263: the prospect of dressing up like a Mexican wrestler. In a childhood spent asking his father “why?” questions, the one unanswerable (and unanswered) question is the “why” attached to his mother’s depression and her periodic attempts to end her life. I respect Every Brilliant Thing for resisting that presumption to explain. Audience participation that is an invitation for us to group-discuss why people get suicidal depression would be too ghastly to contemplate, much less buy a ticket for.

Without the ease-ful expertise of Ullyatt in balancing the comical and the heartfelt, the play and the inspirations of the moment, Every Brilliant Thing could seem awfully artificial and ingratiating. Instead it’s a touching human story about our shared struggles to achieve, and retain, happiness. Don’t be alarmed by that prospect; celebrate it.