From beyond the grave, a ghostly contact and a paranormal thriller: Séance at Fort Edmonton

Here’s a clammy thought for a winter night: the boundary between this world and the one beyond the grave is porous.

In Séance, the paranormal thriller that comes to the vintage Capitol Theatre at Fort Edmonton Park this Valentine weekend, magician/playwright Ron Pearson will demonstrate. Prepare to be haunted; séances are by definition interactive (and sometimes have unexpected results, as we know from Noel Coward’s Blithe Spirit). .

It starts with death. “A woman has been brutally murdered at the Selkirk Hotel,” says Pearson of a show he first unleashed on audiences at the 1998 Fringe, and revived three years ago in a slightly altered story (the woman was buried alive). In any case her ghost will not stay put; she roams the streets of Edmonton. Which is why a pair of paranormal investigators, ghostbusters, are on the case to make contact in the next world, “to put her restless spirit to rest.”

In Séance, Pearson, not only a virtuoso magician/illusionist/street performer himself but a magic history scholar, re-creates a Victorian Spiritualist meeting, of the kind attended by such luminaries as Sir Arthur Conan Doyle and Abraham Lincoln. And he crosses it with a version of the “Spook Shows” which had their heyday in the 1930s and ‘40s.

Pearson warms to his favourite subject, with examples and context. The American Davenport Brothers, he explains, famously had a wooden “spirit cabinet” in which they were tied up. “Musical instruments would play, and things would fly out the top.” Late-period Houdini made a point of exposing them as frauds who exploited a repertoire of illusionist tricks to create their “supernatural” effects.

In Spook Shows, “there would be a horror or mystery show on screen. And the lights would go out. And ghosts would grab you,” says Pearson. “By the late 1950s, the Spook Shows had stopped,” not least because when the lights went out, gangs of boys would throw darts at the screen. It’s “one of the great regrets of my life,” he says, that he missed seeing an example in Edmonton in 1972. Magicians don’t forget. 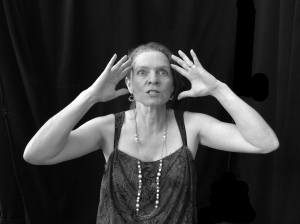 Mediums and psychics make their money from people’s intense desire to believe, their hunger to hear from deceased relatives one more time. And most use illusionists’ trickery, says Pearson, whose archive of plays includes Orson Welles’ Last Magic Show and most recently Minerva – Queen of the Handcuffs (about the notable escapologist who came up against Houdini), which premiered at the Roxy last season and then ran at the Fringe. “Most psychics can be exposed,” Pearson says, citing spiritualist M. Lamar Keene’s  book The Psychic Mafia. “There are so many fakes…. But if people want to believe, they will.

Magic and illusions are part of the skill set chez Pearson. Fringe audiences will remember Pearson’s interactive vintage side shows for a toonie in tents on the festival midway, starting with Spider Lady. The current production is a family affair. Pearson’s wife actor/playwright Claire Mullen co-stars with Phil Zyp. Their daughter Molly Pearson, an accomplished stage manager currently preparing for the Citadel production of The Garneau Block, directs.

Tickets: fortedmontonpark.ca or at the door