Gerald: the man, the playwright, the long-running comedy, and now the Fringe playwriting award

He’s a playwright with a gift for sassy and subversive black comedy. He’s an administrator who can tap his own sense of cosmic absurdity and wry good humour to broker calm between artists (and their close relatives), media divas, aggrieved theatre patrons, irate jugglers…. And nowhere is Gerald Osborn’s rare assortment of skills more crucial than at the festival that was, and remains, Edmonton’s craziest, best invention ever: the Fringe.

For 30 years he’s worked at the festival where organization comes face to face — and in Osborn’s case, eyeball to eyeball — with chaos, and the new is born in the tension between order and anarchy. Last night at a rather riotous roast-and-toast tribute, the Fringe honoured Osborn — “the unofficial keeper of the Fringe’s history” and its secrets — with an anniversary launch of the new Gerald Osborn Playwriting Award. 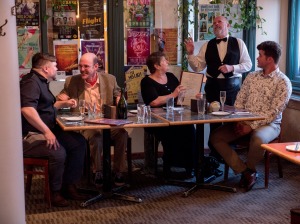 Perfect, since Osborn has himself penned and directed some 19 Fringe premieres, embracing characters as varied as Adam and Eve, Oedipus, bedbugs, and a talking penis. As he pointed out Friday night, it’s great that David Mamet and Sam Shepard show up at the Fringe, but the heart of the matter is new work.

There were speakers (yours truly honoured to be among them), video clips (including one from Fringe founding father Brian Paisley), and a stellar pool of Gerald anecdotes, many involving his smarts, his deceptively mild-mannered archive of worldly shrugs, eloquent eye rolls, and comic running gags. No matter how big the Fringe has gotten, and how inaccessible it can sometimes feel, there’s Osborn on the front line, in his H. Potter glasses, patiently giving directions to the nearest green onion cake or Fringe ticket, responding to “So, what is this Fringe thing anyhow?” on the phone as if he’s never heard the question before.