When the curtain doesn’t open: strange nights without theatre 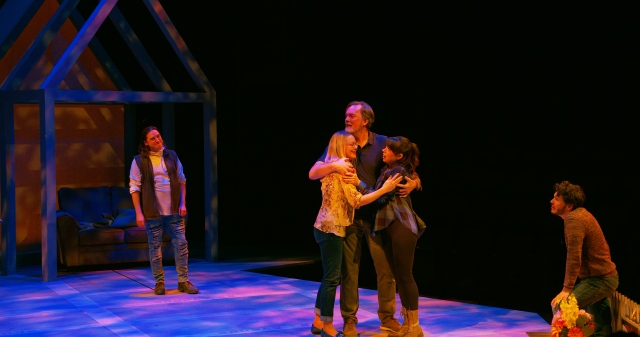 It’s a strange feeling. I’ve spent most of my adult life encouraging people to go to live theatre. Exhorting people to share the excitement, the fun, the surprise, the laughter and the tears, the shared gasp, the surge of feeling, the new ideas, the sense of breathing together … and trying to write about the experience in a way that might intrigue them.

It goes against the grain, to put it mildly, to be advising people that they’re much better off by themselves, at home, at a safe distance from their fellow humans — and for their own good. It’s like discovering that the law of gravity has been suspended.

And when you’ve gone out for a living, night after night, for the last 35 years, just staying home feels a bit like floating off the planet into outer space, and holding your breath. Not to mention that theatre is, supremely and by definition, a live and living form that’s all about the proximity of real people, the spark that happens when artists and their audiences share a room. It’s a spark you don’t get watching a screen.

And there’s this: live theatre is also a culture of close calls and close-to-the-bone operations. No one (sane) goes into live theatre for the money. Theatre people are incredibly good at making much of little. But not-for-profit theatre companies aren’t sitting on cushy margins; they’re precipice-dwellers at the best of times. The very necessary hiatus, the cancellations and postponements at theatres large and small that are the through-line of theatre news these days, are heartbreaks, every one.

When Edmonton Opera announces the cancellation of Candide, which was to have opened last Saturday night, that production is one of three for their entire season. When the Varscona Theatre announces the temporary closure of its 200-seat house, ditto Grindstone Comedy Theatre in their tiny venue, the loss of revenue from(very) modestly-priced tickets, is a huge body-blow to venues, and every arts group that uses them.

The chief investors in theatre are its artists. They inhabit a precarious world of freelance gigs and short-term contracts, unstable at the best of times; to survive most of them take on other gigs, waiting tables for example, in industries that are also inextricably linked to the gathering of real live people.

Here’s the thing about theatre artists, of every stripe: they’re ingenious, and urgent, about sharing. They always have been. And the current physical separation of artists and their audiences, necessary as it is, won’t last forever. In the meantime, artists’ bright ideas and resourcefulness in connecting is inspiring.

Theatre and opera companies around the world are taking to the world of live-streaming. The Social Distancing Festival launched, online natch, by Toronto-based actor/playwright Nick Green, whose play Happy Birthday Baby J was recently onstage at Shadow Theatre, gathers information about cancelled and postponed shows from across the country. Check it out: socialdistancingfestival.com.

Die-Nasty, Edmonton’s live weekly improvised soap opera — this season a Jazz Age setting — isn’t running in person at the Varscona, of course. But every Monday night the performers, deluxe improvisers all, gather online from their 12 homes, and through the magic of video conferencing they improvise the Die-Nasty Radio Play, set in the early days of vaudeville. The first episode was last Monday; you can catch it on YouTube.

Northern Light Theatre has cancelled the production of Confessions of a Reluctant Caregiver that was to have opened next week. But, says artistic director Trevor Schmidt, they’re planning to post to their website some video sequences from rehearsal, and views of the set and costumes. At least we can catch a glimpse of what we’re missing.

It’s tricky, to be sure. But director Stephen Heatley, a drama prof at UBC, says they’re devising ways to have acting classes online.

Darka Tarnawsky of Bottom Line Productions, agents provocateurs and specialists in arts marketing and publicity strategies, sent out a letter, full of brainstorming initiatives and provocations, to the arts community. “Is this the opportune time to share some fun archival content? To write and post that blog about art appreciation  you’ve always wanted to do? To prep and share a short video performance, Skype interview or haiku about your coming season? No idea is too out-there.”

With the closures and postponements that have happened in New York, where theatre is dark till at least April 16. Time-Out New York, devoted to telling its readers what’s on in the Big Apple, has re-christened itself temporarily Time In. The chief reviewer presides over a “theatre from home” site to announce webcasts and live streaming entertainment events. Broadway World (@BroadwayWorld) has a #LivingRoomConcerts series featuring Broadway stars singing numbers from the musicals audiences are missing at the moment.

Or there’s reading. Mark Fisher of the Guardian has suggested resorting to the page — and starting, with all the allegedly unstageable plays you can get your mitts on, like Ibsen’s Peer Gynt. Hey, is this the moment for a GBS binge?

Artists and arts companies do need our support to stay afloat and breathing. Instead of collecting a refund, consider donating an unused ticket for shows that aren’t happening right now. Or buy a subscription for the upcoming season.

In the note that Chicago’s famed Steppenwolf Theater sent out to its audiences this past week, they said “our greatest hope is that this current hiatus of live theatre at Steppenwolf and elsewhere will only serve to rekindle our love and appreciation for it.”

In Edmonton, we already have a profound and lively sense of what we’re missing. Hold that thought, and stay tuned.