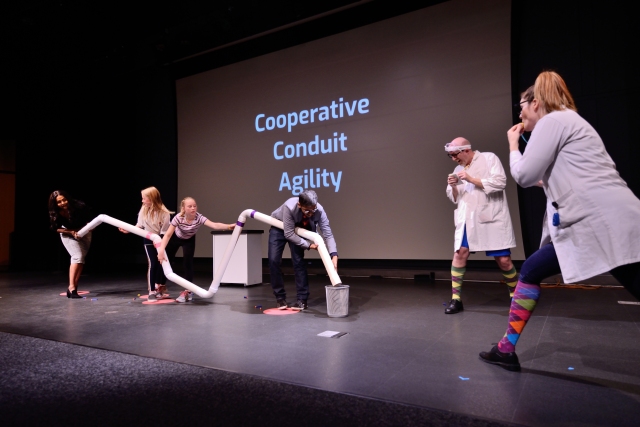 The Fringe has always been a lab for bright ideas. That’s why the people love it; that’s what it’s for, this bright idea hatched in Edmonton 38 summers ago. So here’s a new one, from Fringe fave/ playwright/ actor/ musician/ and now video producer Chase Padgett, of 6 Guitars and Nashville Hurricane fame.

Digital Fringe is a series that brings 10 Fringe hits — in a wide range of styles and genres — to you in your living room stronghold, for a Fringe-y ticket price of $11.99 (or the entire season for $39.99) of which 90 per cent goes directly to the artists.

Search either Digital Fringe Volume 1 on vimeo.com or go to www.digitalfringefest.com. And you’ll find shows that include TJ Dawe’s Operatic Panic Attack (which Padgett filmed at the Vancouver Fringe), Reality Crack, an unclassifiable experimental piece written and performed by Candace Berlinguette and Laura Raboud (filmed at the Edmonton Fringe), and For Science! Small Matters Productions’ delightful clown experiment in applying the scientific method to matters of the stage (filmed here).

It all started out a year and a half ago, at the end of the 2018 Edmonton Fringe, Padgett’s project for capturing and preserving the pleasures, challenges, and excitement of top shows from the circuit of Fringe festivals across the country. And it’s still that. But in this new world of isolation and uncertainties, postponements and cancellations, it gains an additional creative lustre — for both Fringe audiences and artists who have suddenly lost their financial (and artistic) footing. Padgett himself is one.

Fringe credentials don’t come more gilt-edged. His actual wedding last summer was a one-night Fringe show, Chase Padgett Gets Married at BYOV 20, the Garneau Theatre. 6 Guitars was slated for a Toronto run this very week with Mirvish Productions, and is now on indefinite hold. “Right now I’d have been waking up in Toronto, getting ready for my matinee,” says the amiable and articulate Florida native on the phone from his new home, Vancouver, B.C. “Here I am, surfing the apocalypse like everyone else.

The “Fringe tour,” a circuit of Fringe festivals that crisscrosses the country (and the continent) and contributes mightily to artist incomes, is now precarious, every step of the way. As Padgett points out, his home town Fringe in Orlando — slated for May 11 and the oldest and “widely regarded as the best in the States” as he says — has been cancelled. Heartbreaking news. Another May Fringe, in London, Ont., has been rescheduled for late September.

The mighty Edmonton Fringe, the oldest and the biggest of them all, owns August, just before Vancouver and Victoria, and after Montreal, Toronto, and in July, Winnipeg. “I sure hope it happens,” says Padgett, a 10-year veteran of the Fringe tour. “No one really knows at this point…. What I do know is we’ve all already lost gigs we needed to pay the bills.” Digital Fringe “just gives us a way to maybe weather the storm a little better. Also, I can work on video without going outside!”

Padgett unspools his digital idea back to its origins. “For 10 years (on the Fringe circuit) I’d been seeing shows that blew me away…. They became lore; there was a romanticism to them,” he says of legendary Fringe shows that vanished into the cultural ether as titles alone. “And I thought ‘wouldn’t it be cool to re-live them?’ And in a way that would be more than just an archive.”

And there was a financial impetus too. Unlike film and TV, “there are no residuals for stage actors, no mailbox money for them, no cast albums…. If I could prove a viable business model for monetizing theatre beyond a cast recording, if it became financially viable, the whole world of indie theatre would transform. It would open more doors. And maybe even raise the bar (on indie productions) in time….”

The inspiration came from affection. “I love the environment of the circuit,” Padgett says of the world of the artists who move from Fringe to Fringe across the country. “It’s a very interesting life; I feel part of this very special fraternity.”

As every indie theatre artist will tell you (and I can attest, from a zillion press kits), “it’s so hard to get good video,” he says of the theatre need that he set about filling, the vast gap between Netflix quality and the average archival video footage of the average theatre artist. “In every town I’d hear ‘does anyone know anyone who does video?’”

Padgett, who “nearly went into electrical engineering in college,” tapped the technical side of his brain. He taught himself video production, “a real craft … tailored for a Fringe environment, set-up in 30 minutes. I was learning and providing a service to artists.”

In the summer of 2018 Padgett “didn’t have a lot of gear,” only a camera he’d been using to capture his own Disney cruise line shows (a showbiz life he details in his Fringe show Heart Attacks and Other Blessings). He was in full borrow-stuff mode. But he had a discerning eye — and ear. “For a real professional production you need multiple cameras. And it needs to sound great.” It’s in audio that most theatre videos fall dramatically short, says Padgett, a top-drawer musician himself as his theatre fans know from his shows which invariably include music. “The eye is way more forgiving than the ear.”

And, as Padgett points out, especially in Fringe productions which tend to be sparing in the visuals, the presence of the audience via expert aural capture is indispensable in creating a sense of space and dimension.

The current Digital Fringe series is Volume of a long-term dream for “a video-on-demand service for new theatre … a sort of Netflix for new creative work by minds that love the theatre.” He’s already thinking of a Volume 2 that will include storyteller Paul Strickland’s 90 Lies An Hour that he filmed last year.

His medium-term plan was to mention Digital Fringe in post-performance shout-outs this summer, “and build awareness.” But the world overtook him. Times being what they are, very tough for artists, he went into production tempo. “I just want to ease the pain a little bit for everybody…. I wish I had more more diversity (in artists and genres). But this is all the video I had on hand.”

Padgett will be shooting more shows, whenever the Fringes ramp up this summer. Look for his updated Heart Attack and Other Blessings at the Winnipeg Fringe in July, and the Garneau Theatre BYOV in August. “If it happens, I’ll be there!”

The first 100 people to use the promo code “freefringe” will get a 100 per cent discount. And if you’re struggling to get the ticket price together, email Padgett at PeacockFarmProductions@gmail.com for a hand with that.