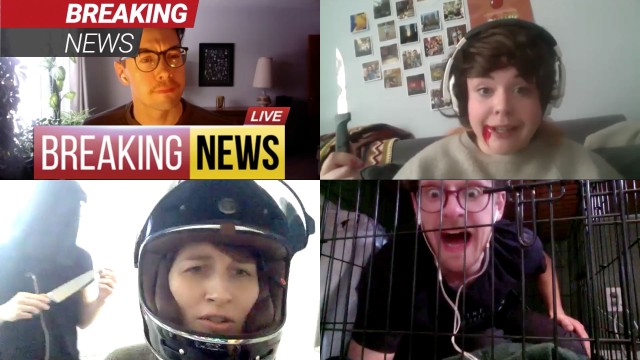 Rapid Fire players, rehearsing on Zoom from their own homes.

It’s a strange moment in history when live theatre has been struck down by the lack of its traditional venue (and raison d’être) — the room where people gather, and actors and audiences connect, in person.

So, the internet as theatre venue? Matt Schuurman, who’s both the artistic director of Rapid Fire Theatre and an award-winning video designer, thinks of it as a kind of role reversal. “Video used to be in live theatre … an element there to support the storytelling and the action. At the moment, live theatre is in video….” But is that a sort of cultural oxymoron?

“We’re looking for ways to say Yes to this, and look for the fun in it,” says Schuurman of the corps of elite Rapid Fire performers who’ve been online with each other for a couple of weeks, brainstorming, experimenting, and workshopping new programming ideas for the improv comedy company.

“Let’s stop trying to do traditional theatre in a non-traditional space — because you’re never going to be able to deliver.” Instead, ask “what is the gift this new non-geographical venue gives us?” He and his RFT cohorts are, he says, “looking for innovative ways to share our programming, deliver our mission for a while rather than disappearing.”

Rapid Fire, devoted to improv in all its forms, has long been the most internet-savvy theatre company in town. “In the old days,” at the company’s original digs, the previous incarnation of the Varscona Theatre where long queues waited outside to see their Friday late-night shows, they shared the stage with whatever set from whatever theatre production was in place or under construction. “It changed on a weekly basis, Shadow, Teatro … that’s what we had to adapt to,” says Schuurman. “It was a blessing and a curse…. Some sets were were extraordinarily fun to play on, some were extraordinarily restrictive — though there can be fun in those restrictions too.”

What the Rapid Fire improvisers inherited when they moved downtown, as the sole occupants of Zeidler Hall in the Citadel complex, was “a big empty stage with a movie screen behind it. And we said Yes to that as well….We started incorporating a lot of video into our shows.”

At Improvaganza, RFT’s annual festival of long-form improv experiments, they tinkered with integrating live performers and lifestream video. Or cellphone texting as the source of audience cues. In the astonishing TEDxRFT, Julian Faid and Kory Mathewson devise an improvised Ted Talk on the spot, complete with screen imagery, on a subject chosen by the audience.

“Now we’ve been dabbling in livestream rehearsals,” on a variety of video conferencing platforms, Zoom, Facetime, Google Hangouts… At the click of a button you can turn off your camera. And poof, you’re gone. Entrances and exits can be mischievous. Or magical. Something to play with….”

Schuurman created his first video design for theatre in Azimuth’s 2008 production of Su-Kat at the now-defunct Living Room Playhouse. “I had an animation degree; I was involved in theatre. I’d never had the opportunity to marry the two” till Murray Utas and Steve Pirot proposed show, “actually about animation and dream worlds,” and asked for his help pulling it off.

“I refocussed my education towards animation, thinking I’d end up in film and TV or maybe video games,” says Schuurman. “And instead it’s come full circle; it’s looped back to theatre.” Since then he’s created video designs for a wide variety of theatre companies and productions. “Some are developed with video in mind, like Su-Kat or Surreal SoReal’s Genius Code. With others it’s a complementary element, a choice like lighting or a set piece: ‘we need a beautiful sunset’.

But through it all, the crucial question is “how does the video contribute to the other elements,” says Schuurman, “to pull off a successive cohesive piece.” In screen productions and adaptations, as he points out, “the medium is the finished project, the entire experience. For theatre, video is a piece of a larger puzzle, with the end goal of supporting the story.”

In the new, temporary, reality for live theatre, struggling as it is to make its presence felt in the online world, can its essence, the live, shared experience, be simulated? Experiments of every budget and technical expertise abound. Some are signposts to the main event. You can see actors performing excerpts from productions, or reciting poetry, in their living rooms; I point you to Broadway star Patti LuPone’s kooky series of Twitter videos from her basement. Or the Citadel’s engaging Stuck in the House series on YouTube. Or the wonderful Zoom sing-out by the original Hamilton cast of that show’s opening number, actor by actor — as a birthday present for a star-struck nine-year-old — on John Krasinski’s YouTube series Some Good News.

Some are ingenious re-thinks. Die-Nasty has reimagined its live serial soap episodes at the Varscona as an online (YouTube) improvised radio play.

Some are full-scale productions, like Broadway Live or the National Theatre’s superlative screen series from their archive that began last week with One Man Two Guvnors, and continues tonight with Jane Eyre.

Schuurman points out that much depends on the intention. “If the idea is just a catalogue, an archive to be referenced, just turn on the camera and let it roll, it’s generally not very watchable….” For one thing, “a lot of our venues aren’t designed, or well equipped, to be TV studios.” And at home we have to rely on phones or laptops.

“I have yet to see a tool that can replace the experience of being in a room with people, sharing a story,” says Schuurman. “That’s what we’ve discovered in rehearsal, how much you feed off the energy of the crowd, the feedback of their laughs and their responses.” As the director of an online rehearsal, he’s learned to leave his mic on, so the performers can hear him laughing, or breathing.

But “if we’re spending a lot of time and resources on a temporary fix, maybe there are things that can continue,” says Schuurman. Stay tuned. In the next couple of weeks, Rapid Fire will be rolling out new adventures in online programming. “We’re looking at this as an offer, a challenge, an opportunity to find new ways to play.”