Meet actor Chris Pereira. And look for the others in this continuing 12thnight.ca New Faces series. First up was actor Helen Belay; then designer Alison Yanota and stage manager Isabel (Izzy) Bergquist.

If you had the fun of catching the Bright Young Things’ Fringe production of the absurdist groundbreaker The Bald Soprano last summer, you’ll appreciate the daffy synchronicity of Chris Pereira’s anecdote.

In the play a fire chief shows up in the scene in full regalia even though there isn’t a fire (only the vague possibility of one at some indeterminate future moment). Pereira, in full costume, is walking in the backstage hall of the Varscona Theatre, waiting to go on. The theatre management assumes the fire marshall has come to do an official inspection, and panics accordingly.

You can only think that the playwright Eugene Ionesco would have smacked his lips. The Bald Soprano is a veritable seminar in the fine art of nonsense, language unhinged from logic. Motivation? Back story? Pereira, very droll in conversation, laughs. The trick, he says, “is to not dwell on it too much or you’ll ruin it…. You just enjoy the ride!” 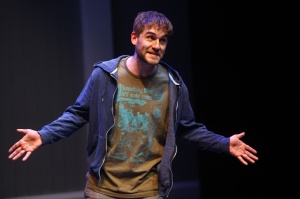 It took him three years to get into the U of A theatre school (he gathered a resumé that includes commercials and movies). Since he graduated last April, after a Studio Theatre season that included Will Eno’s hauntingly oddball Middletown (the role of the mechanic was a “peak experience” for him) and Jordan Tannahill’s Concord Floral, Pereira has caught the attention of artistic directors of companies of every size across town.

As it happens, Pereira’s year has been a cross-section of comedy, in all its variegated colour palette, and his expertise and timing are striking. It started with Theatre Prospero’s touring production of A Midsummer Night’s Dream; he played one of the young lovers lost in the enchanted wood of romance. Then a delightful summer with Ionesco, a cuckoo clock of absurd moments, including “my long monologue about a weird family tree, five minutes about absolutely nothing!” He credits Bright Young Things’ artistic director Belinda Cornish, who’s applauded his talents to an assortment of Edmonton theatres, “with the vast majority of my work this year!”

Teatro La Quindicina’s sparkly revival of the Stewart Lemoine screwball Vidalia had Pereira as suit salesman Doug who finds himself entangled in a wild espionage plot for reasons he can’t even begin to fathom: “a regular person, descending into madness,” as Pereira puts it. “I read the script and laughed so hard….”

Lemoinian comedy, he found, is a particular style, a combination of breezy and grave, “very smart-funny, that requires a very very precise way of going at it,” says Pereira. “You can’t really play for the laughs.” His cast-mates included fellow Lemoine newcomer Helen Belay, as well as Teatro veterans Cornish and Andrew MacDonald-Smith: “two Lemoine experts to watch, so kind in always helping us out, getting us accustomed to the style.”

In Bed and Breakfast at Theatre Network, in which Pereira co-starred with Mathew Hulshof, you saw two actors expertly play a couple who conjure between them, with great precision, nearly two dozen characters, all ages, genders, sexual persuasions, populating the year they spend in a small town, reinventing their very urban lives. “An important message that blends in perfectly, with characters you can get behind,”  says Pereira. And the quick changes make it “a very challenging show, one of the hardest ever…. I had to keep it simple for myself, to pick one gesture, one way of (moving), one voice — three simple things per character.”

An Edmonton kid, Pereira, now 28, was the odd-person out at his sports high school (“my one and only high school play” was the musical Back To The ‘80s). He’s already started down the path through the woods towards showbiz, age nine. At Theatre Zocalo, Pereira was “dad in Hansel and Gretel, with a cardboard and cotton ball beard…. I was taller and older than some of the kids.”

The next year, in a startling long jump through the theatre repertoire (as he laughs), he’d graduated to Shakespeare, as Demetrius in A Midsummer Night’s Dream. Ah, experience that may or may not have impinged on his two summers much later with the Freewill Shakespeare Festival, in The Merchant of Venice and The Merry Wives of Windsor in 2017 and The Comedy of Errors and Hamlet the following year.

Like so many actors of every age in this theatre town, the Fringe figures prominently in Pereira’s experience. He started in 2013, and he’s added sound design to his actorly skill set. And he and Eric Smith have their own company Get Off The Stage with an appetite for edgy, challenging fare; they picked Martin McDonagh’s macabre black comedy A Behanding in Spokane and David Mamet’s provocative Oleanna. If the times had been different (a phrase that comes up a lot in when you’re talking to theatre artists), he’d be missing the Fringe for the first time since 2013 to be in Rosebud this summer, in a stage production of Chariots of Fire. He was working, both as an actor and a sound designer, on the new Collin Doyle play Signs for Concrete Theatre when the shutdown happened.

“That’s where I find comfort,” says Pereira. “We’re all in this together….”

Meanwhile, he’s filming himself for auditions for the upcoming theatre season, and dreaming of the future. “I would be very very happy if I could build a career working in theatre in Edmonton,” he says. “But one of my goals since I was a kid, for the majority of my life, was film.” He’ll be trying to weave a career with both threads.