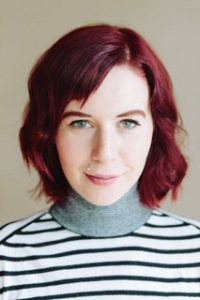 Stephanie Bahniuk is sitting on the front porch of the 1850s house in the leafy university town of New Haven, Conn. where she’s lived for three years. She’s musing on the way life’s big-M Moments can veer off in wildly unexpected directions, and big breaks can suddenly get big cracks.

A couple of weeks ago Bahniuk, Edmonton-born, -raised, and -educated, graduated from the Yale School of Drama with a master’s degree, an MFA in design. It happened in that special 2020 way: on Zoom. Her family applauded from Edmonton.

Ah, Zoom. That’s where she’s  been going to classes for the last eight weeks. “My cat has been wondering why I’m home so much,” says the new Yale grad. The trickiest class to translate to Zoom world? “Life drawing,” laughs Bahniuk instantly. The live nude model? Cancelled. 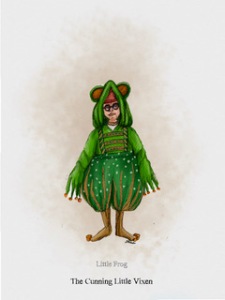 What wasn’t cancelled was her thesis. She presented it over Zoom, “from my bedroom,” she laughs. The “theoretical studio project” she chose was The Cunning Little Vixen, a Czech opera in which most of the characters are animals. The presentation included 30 to 80 costume renderings. And because the fabric stores in New York were all closed, the swatches were gathered online. 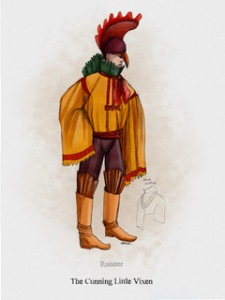 Cancelled: that’s a word Bahniuk, like all theatre artists, has heard a lot in 2020. “It is a really strange time to be graduating,” she says with a rueful laugh. But then, it’s a really strange time to be in theatre, period; an entire industry has completely shut down, temporarily but … indefinitely. Bahniuk’s is a cross-border pandemic story full of exciting career opportunities, unexpected connections — and cancellations.

Edmonton audiences know Bahniuk, a U of A design grad, from such shows as Pyretic Productions’ Blood of Our Soil, the Mayfield’s Jesus Christ Superstar, Alberta Opera ’s Hansel and Gretel. She won a Sterling Award for the ingenious deconstruction of her gangway design, complete with birch trunks and astro-turf, for Stupid Fucking Bird, Dave Horak’s much-lauded Edmonton Actors Theatre production, a contemporary reimagining of Chekhov’s The Seagull. 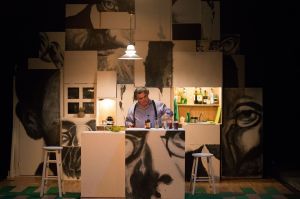 Bahniuk had originally crossed the continent (with U of A design classmate Megan Koshka) to intern at Bard College’s SummerScape in upstate New York. Then for three summers in a row she was an assistant costume designer at the Williamstown Festival in the Berkshires, a notable springboard for shows heading to NYC. “And it gave me a taste of what it’d be like to work in New York,” she says of the prospect of  “bigger budget shows at regional theatres, as well as Broadway and Off-Broadway.”

Yale, and graduate school there, might not have occurred to her had she not landed a Williamstown gig as assistant to the great costume designer Jane Greenwood, a legendary figure in New York, and head of the costume design department at the Yale Drama School.

“That was my motivation to take a chance and apply…. I wasn’t banking on coming, or even getting in. But then I was accepted!”

At the U of A, design students are encouraged to apply themselves to set, lighting, and costumes, all three, says Bahniuk. Making a living in Canadian theatre means that designers take on multiple elements, in indie productions often all three. “Here you can make a living just doing one; the industry is so much bigger.”

The Swallow and the Tomcat, Verano Summer Cabaret. Costumes by Stephanie Bahniuk. Photo by Elsa GibsonBraden.

At Yale, Bahniuk specialized in her first love, costumes. That’s been her focus since she got drawn into theatre in high school (at Archbishop Jordan), first as a dancer, and then in production.

She’d have been back at the Williamstown Festival this very summer, as assistant costume shop manager. “It felt full circle to go back there; I was excited about the job. And they had an incredible season lined up.” It was not to be.

Yale comes with its own prestigious set of perks, as you might expect. The faculty are nothing if not well-connected. And then there’s prime theatre location: a two-hour train ride to New York City. “They encouraged us to go to the city.” All the fabric for Yale productions, even swatches for studio assignments that would never end up onstage, comes from New York. “A great resource to be close to the city,” says Bahniuk. “And great too to be out of the city (to live and study). It kept the work more focussed…..”

The Yale College production of The Winter’s Tale, “totally designed and ready to go” for an April run, “got cancelled over spring break.” Timing did work in Bahniuk’s favour, though, for another Yale advantage, the chance to design a show for Yale Repertory, the fully professional theatre company associated with the school. 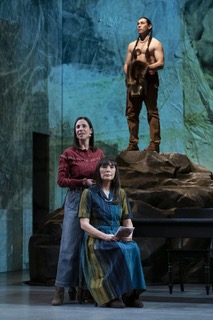 Bahniuk landed Manahatta, the third production in Yale Rep’s season, the East Coast premiere of an intricately woven play about the American inheritance vis-à-vis the Native population that had premiered at the Oregon Shakespeare Festival. As she describes, it could scarcely have been more challenging for a costume designer. “It takes place simultaneously in the 17th century and the economic crash of the early 2000’s. The seven actors play in each time period” in 30 scenes that switch location and time period. It opened in early February, just before the shutdown.

Yale’s annual “in-person design showcase in New York,” a sort of debut to the industry for its grads, was cancelled. Bahniuk has been in the States on an F1 student visa for three years. And the grand finale, another Yale perk, OPT (optional practical training for a year after graduation), is at hand. It’s the chance, says Bahniuk, to remain in the U.S. and work legally for a year and gain experience “as long as it’s in my field.” Ah, there’s the catch. Her 12-month OPT begins July 10. And on July 31 she’ll “take the risk” and move to New York, as planned. But “it’ll be a very different year than I had imagined,” she says. “There won’t be a lot of theatre till 2021.” She plans to investigate design work in film and TV, “once they open up again.” And she’s looking at fashion-based work, too.

“There are so many immigrant artists in the U.S. who have worked for years to build careers here, and now are stuck.” Applying for unemployment benefits isn’t a possibility; “it could jeopardize future visa applications.”

On the plus side, “there’s a great community of international designers in the city, and people will look out for me, which is kinda nice,” she says. “There was even a Go Fund Me campaign started here to give $500 micro-grants to immigrant theatre designers. And I was very lucky to receive one…. We have to support each other, even if it’s free work. The idea is to build our resumés; that’s the point of it….”

Meanwhile “I really appreciate New Haven now more than I have for the last three years,” Bahniuk says. “It feels pretty safe in a pandemic. The weather is beautiful. And it’s never been fully locked down; you can get outside a lot…. It’s an old campus, so beautiful. And so many parks, and walks.”

It’s a moment of calm before the storm of the unknown, when Bahniuk’s story continues. “I truthfully have no idea how I’m going to live and work after the first few months of my lease. And I am not alone…. I thought grad school was hard but the next year is going to be a challenge. ”