Portrait of an Indigenous artist in a Fringe-less summer: Todd Houseman

A summer without Fringes? Without real live audiences to test new material?

“It’s been a deeply reflective time,” says Todd Houseman thoughtfully, of the four months-plus since in-person performances suddenly vanished from the land. “A time for creativity, revolutionary protests….” 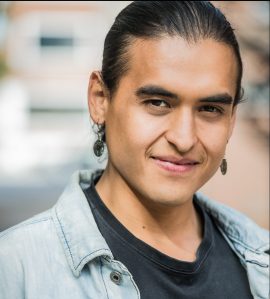 The formidably versatile Indigenous actor/ playwright/ filmmaker/ Rapid Fire Theatre improv star, is on the phone, across the country from home in Montreal, where he’s one production short of his impending acting degree from the National Theatre School.

The co-creator and co-star of Whiteface (with Lady Vanessa Cardona) and Folk Lordz (with Ben Gorodetsky) has found the time productive. “In a time of hardship, there’s more of a motivation I guess,” he muses, of his work as a writer. “It comes out way faster; it seems more fuelled….”

Had times been different, this is the year that the film version of Whiteface, a 2018 Fringe hit adapted for the screen by award-winning Indigenous film and theatre artist Everett Sokol, would have been touring film festivals. The play and film have a sharply honed edge of satire about cultural misrepresentation; it couldn’t be more timely, as you might surmise. Cardona, a Colombian refugee, and Houseman, who’s Cree, perform in white masks, in a demo, as Houseman has put it, of “the real price of cultural appropriation, how it feels to see your face misrepresented: a very conscious stereotyping of the White Face.” 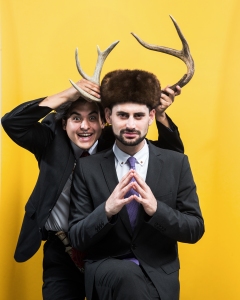 “This has been a time to look at film-making and performance,” Houseman says of the hiatus in theatre and film production. He’s currently editing a theatre school film project with masks. “Film can add a certain level to storytelling….” It’s something that particularly interests Houseman. Original new forms of storytelling are the inspiration for Folk Lordz, a unique long-form improv which pairs  Houseman’s skills in the Cree oral tradition and Gorodetsky’s heritage in Russian folk tales and literary character drama.

Of necessity, this has been a time for “making art at great distances, in a short time.” He and Cardona have collaborated on a 10-minute piece for the Citadel’s Horizon Series. And they’re working on a digital version of Whiteface, spun from the same techniques and insights. We’ll see it as part of the Edmonton Fringe’s upcoming online incarnation, alongside an interview by Fringe director Murray Utas.”I love talking to Murray! I’m really looking forward to that!”

He’s struck by the coincidence that the pandemic has left them both locked into place “on very important land,” meaningful to both their identities. “North of here,” he says of Montreal, “is where my Cree ancestors are from.” Cardona is trapped on location in her home country of Colombia. “Our ultimate goal is to create a very loose cabaret … like Whiteface in its bite but loose enough for anyone to join.”

Black Lives Matter has been an inspiration for people to re-examine their relationships with people marginalized by race, colour, gender, sexuality. Houseman, too,“as a cis hetero man,” has been pondering the implications. As an Indigenous artist frequently consulted for insights on the Indigenous experience, he’s wanting to spread the attention around.

“A learning experience,” he says. “There are newer and braver emerging voices that I’ve wanted a chance to listen to…. People should be listening to the Tiny House Warriors, the Beaver Hill Warriors.”

As for improv, “most of the skills are transferrable” to the Zoom world, thinks Houseman, who’s about to teach improv online to people  in Vancouver. Zoom can satisfy “a need for validation and a sense of play” with other performers. But as with film, the question of the audience is more problematic. “Who’s there? It can seem almost an echo chamber.”f

Meanwhile, Houseman the writer is making isolation work for him, enhancing his film skill set as he goes. As for the material hardships as Fringe cancellation season rolls on? “I’m OK for now…. I’m used to a  ‘for now existence’. After that … “I don’t know.”