All That Binds Us: a new Azimuth Theatre creation ponders connection in a fragmented world 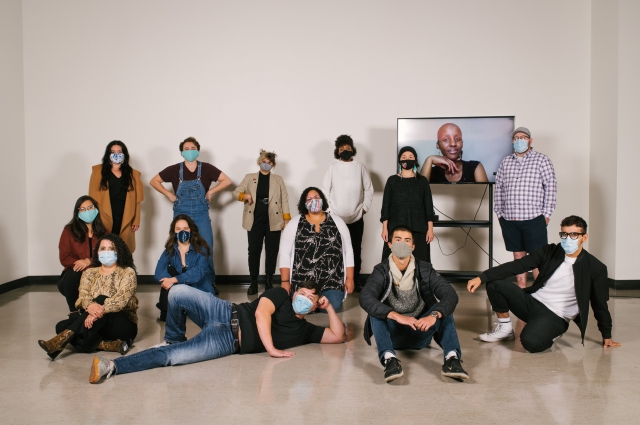 All That Binds Us, Azimuth Theatre. Photo by Brianne Jang, BB Collective Photography

Here’s a thought with special reverb in a world of fragmentation, enforced distance, separation, isolation: “People don’t want perfection; they want connection,” declares Reneltta Arluk, director of All That Binds Us, premiering Friday in a live and live-streamed production.

Everything about Azimuth Theatre’s newly devised theatrical creation, starting with the title, speaks to that hunger. It’s what stories are for — to explore the urge to belong, the sense of what’s shared across time and space, cultural/ ethnic/ racial divisions. You’ll see five characters (along with a mysterious sixth, who might well be the poster people for diversity, repair to an Edmonton bar, The Muskrat’s Paw, on Canada Day.

Post-rehearsal last week at Fringe Theatre headquarters, Arluk, the Inuvialuit Cree Dene artistic director of Akpik Theatre and head of Indigenous Arts at the Banff Centre, is on the phone along with dramaturg and assistant director Jenna Rodgers. They’re explaining how a racially/ ethnically/ artistically diverse team of 10 theatre artists — playwrights, actors, creators, movers, theatre animators in the largest sense — came together to think about “how we connect and how we disconnect,” as Arluk puts it.

Vanessa Sabourin and Kristi Hansen, Azimuth’s joint outgoing artistic directors, reached out to Arluk and Rodgers in the summer of 2018. Their idea, says the latter, a versatile mixed-race artist based in Calgary and Banff, was to “bring dynamic people together…. When you’re racialized you work (within) your own race a lot of the time.”

No such frontiers exist in All That Binds Us, a collaboration with a wide embrace. It came to pass in the course of meetings and workshops that started long before COVID changed the optics on physical connection. Gradually, stories coalesced, a diverse creation team gathered, and a six-performer BIPOC ensemble assembled. “Azimuth gave us a lot of agency; we never heard ‘this is what we envision’ from them,” says Arluk, whose groundbreaking Akpik production of Pawâkan Macbeth, a re-imagining of Shakespeare’s brutal tragedy in the wartime world of the Plains Cree in the 1870s, was part of the Chinook Series this past winter.

“We’re building the world together,” she says of the team and the new creation. That process, says Rodgers, “has (inevitably) been informed by the tragedies of the last year,” not least “in the sense that it’s changed who we are.… But most of the text was written before COVID and before George Floyd’s murder.”

Since the characters have their own stories, and their own identity issues, would All That Binds Us be five solo pieces, monologues joined together? “We talked about it…. But no, we made a conscious decision to have an ensemble piece,” says Arluk, who has a distinguished cluster of firsts attached to her resumé. The first Aboriginal woman (and the first Inuk) to graduate from the U of A theatre program in 2005, she became the first Indigenous director to stage a production at the Stratford Festival 12 years later, with the premiere of Colleen Murphy’s The Breathing Hole.

Collaboration seems to be an Arluk signature. Her Pawâkan Macbeth was inspired by input from the kids of the Frog Lake First Nation. With the new Azimuth show, she says, it was the job of dramaturg/ assistant director Rodgers and actor/playwright Makram Ayache (who also performs in the piece) “to make sure it flowed, to deepen (the story momentum), to make it more cohesive.”

The six BIPOC characters, of diverse racial and ethnic backgrounds and “grappling with identity,” aren’t replicas of the creators. They’re fictionalized, built from “our conversations, lived experience, our own narratives,” as Rodgers put it. “It’s a complex process…. It’s easy to dimensionalize, but we’re representing only ourselves.”

“We wanted to acknowledge distinct perspectives…. What is  it to write across race?”

How does it feel to rehearse live in the age of COVID? “Dangerous!” laughs Rodgers, who will direct Mary’s Wedding: A Métis Love Story at the Citadel in November. “But both Azimuth and Fringe Theatre have devoted a lot of consideration to safety precautions for this; we’re among the first groups back in the building (the ATB Financial Arts Barn). We were all COVID-tested before we entered the Fringe building, and the space.” And regular testing has happened ever since.

Under such circumstances, even the blocking (where the actors are located and move onstage) is weighted with meaning. “Distance vs. closeness,” says Arluk. Not least because Lebogang Disele, the production’s only black actor, has been in her native Botswana since COVID. And since the production includes a live streaming option in addition to  in-person performance (for a greatly reduced audience in the 300-seat Westbury), Arluk and her team have worked to make the show “more than just theatre being filmed. Direct eye contact with the audience is part of it. We’ve thought about how to fold in the audience….”

All That Binds Us is all about what it means to belong. “As racialized people,” Rodgers adds, “we’re hyper-aware of the missing pieces in our recognizable world. Who’s not in the room? What voices need to be heard?”

What COVID has given theatre, thinks Arluk, is “the opportunity to re-think, to move forward. A lot of organizations wanted to change and didn’t know how…. There needs to be more voices in the room so we can represent Canada. Who are we as a nation?”

All in all, “there’s an extra amount of pressure to make the production excellent,” thinks Rodgers, founding artistic director of Calgary’s Chromatic Theatre. “It’s hyper-charged with anxiety and political tension. A lot of hope that the broader community will (embrace) it….”

Says Arluk, “there a wonderful monologue from Kit (the character played by Sheldon Elter) at the start, a long invitation, a welcome to everyone.”

All That Binds Us

Where: in person at Westbury Theatre, ATB Financial Arts Barn, 10330 84 Ave. or livestreamed