“It will be busy once more … give us a month!” says the co-impresario of a night club, pleading with creditors at the start of Le Moulin Rouge. “Times are tough.”

Hey, a cabaret about … a cabaret falling on hard times and trying to survive, “with CERB running out”? Where do theatre people get these ideas?

The man in the gold lamé harem pants — “the only Lebanese guy on a cabaret stage on this side of the river,” as he says with utmost plausibility — has nailed it. Underscoring the playfulness of the high-spirited cabaret that runs every weekend at the Spotlight in Old Strathcona, is the hard current reality that, as Toulouse (you know, Lautrec) would agree,  live theatre, a struggle at the best of times, has to be especially valiant and ingenious, times being what they are.

Which pretty much describes the esprit de corps at the Spotlight Cabaret, a renovated bistro/bar/club, 18 months old, up the stairs on the second floor of the brick building right across 104th St. from the Next Act and Meat. Yes, chandeliers, Plexiglass, and carefully distanced cabaret tables are involved, along with (sequined) masks. And, in view of  COVID-ian proscriptions against singing from the stage (without elaborate and expensive precautions, like the ones at the Mayfield), the performers currently lip-synch to recorded tracks of their own voices.

The charismatic co-owners, Jeff Halaby and Aimée Beaudoin, are musical theatre triple-threats themselves who met while writing and performing on the sketch comedy TV series Caution: May Contain Nuts. They’re amusing, and quick on the uptake judging by their genial improvised interactions with the audience. 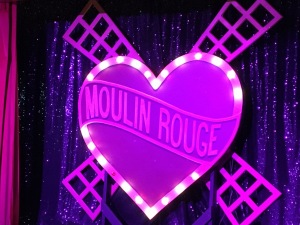 The roster of shows at the Spotlight, which opened a year and a half ago, includes weekly open-mic poetry, burlesque, improv (Thursday nights, with stars Mark Meer and Donovan Workun). As its name suggests, Le Moulin Rouge, directed by Trevor Schmidt, is a spoofy French cabaret, with accents to match, mix-and-match characters in an ooh-la-la assortment of costumes, and a giddy storyline along which the song-and-dance numbers borrowed from pop, rock, r&b (with occasional forays into musical theatre) are blithely strung.

Toulouse (Halaby), “an impressionable boy in the Impressionist period,”  and his partner, the last can-can girl at the Moulin Rouge (Beaudoin), are looking for a new show to revive their failing club. Anyhow, this is an excuse to audition talent. Talent like the perky young Ewan McGregor (Tyler Pinsent), an impoverished, starry-eyed playwright whose eager pursuit of “truth, beauty, freedom, and the greatest thing of all, love!” hasn’t entirely paid the bills. His day job is bartender/server. Incidentally Pinsent, a MacEwan theatre grad with great pipes, actually is the Spotlight bartender.

Ewan instantly falls for a fellow auditioner, the glamorous Satine (newcomer Jamie Hudson, also with a MacEwan degree and a powerful voice), a courtesan/ aspiring actor with a venal streak who….

There are theatre jokes (“I’d like to workshop her script if you know what I mean” wink wink). And there’s lots of music in this larky little jukebox cabaret: everything from Your Song (Pinsent) to I Put A Spell On You (Hudson) is put to use at prime comic moments, plus Lady Luck, Trooper, Air Supply … not a soupçon of Edith Piaf, incidentally. But the tickets come with an elaborate and delish “French-themed” four-course dinner (and full bar service).

It is for the invaluable arranger/ composer/ sound designer/ sound tech Aaron Macri to figure out the tricky logistics in make the lip-synching work along with Alison Yanota’s lighting and Kesinee Haney’s choreography. And he does. The sound is excellent.

In this theatre town of ours, curiously, cabarets have always been in short supply,  and dedicated cabaret venues virtually non-existent. Bienvenue Spotlight, a welcome addition. As our co-host told us at the outset as he gazed at the twinkling lights on the little stage Eiffel Tower, “better tiny and shiny than big and doesn’t work.” Could it be a theatre mantra for our time?