A relationship between the lines: Something Unspoken, streamed by Northern Light Theatre 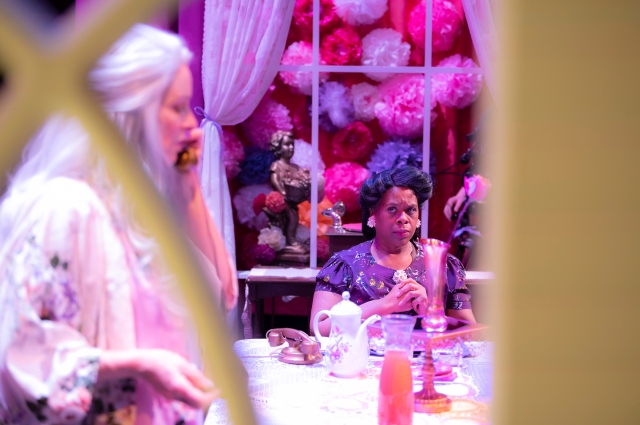 “It’s just that I feel that there’s something unspoken between us that ought to be spoken….” — Something Unspoken, Tennessee Williams

Something Unspoken is the shorter, rarely produced (and earlier written) half of a Williams double-bill (Garden District), that includes Suddenly Last Summer. According to Donald Spoto’s Williams biography The Kindness of Strangers, the playwright grew more and more uneasy — “absolutely terrified” said his leading lady Anne Meacham — as rehearsals began for its premiere in an Off-Broadway theatre in 1958.

What was up? Cannibalism, violence, homosexual pursuit and seduction, enforced lobotomy: Suddenly Last Summer was, Williams suspected, a veritable checklist of trigger warnings in ‘50s American. Something Unspoken, though, has subtler currents; it’s a two-hander that lives in homoerotic subtext, repression, and ambiguity.

In the South of the ‘50s we meet wealthy spinster Cornelia (Davina Stewart) and Grace (Patricia Darbasie), her “secretary” of 15 years on a fraught day. Cornelia is fretfully awaiting the results of an election for the local chapter of the Daughters of the Confederacy, a bastion of antebellum nostalgia and privilege she feels entitled to head.

Cornelia and Grace’s relationship seems more complex, more uneasy and unresolved, than class hierarchy or the boss-employee dynamic alone can account for. As Schmidt himself has said in his director’s notes, a contemporary audience is instantly tuned to the homoerotic desire and tension between two women. “It feels so obvious now,” agrees Stewart. And since Grace is played by Darbasie, an actor of colour, the dynamic of race enters life in the subtext.

The complexities give Something Unspoken, picked by Schmidt 18 months ago for a season of productions devoted to women of a certain age, a prophetic spatial suitability for the pandemic restrictions of the moment.

“Perfect for COVIDian times,” says Darbasie. “We rehearsed in person, six feet apart, masked most of the time … just another COVID rehearsal, you know!” she laughs. “We moved rehearsal to a bigger space downtown,” says her co-star Stewart. “Two characters who are ‘socially distanced’ in the play (itself), and trying to find ways to connect…. They get close and touch only once.” One scripted touch, as Darbasie says: “It’s not like we’re wrapped around each other. It’s all subtlety and subtext.”

Like The Look, its immediate predecessor in the NLT season, the production exists not as a movie but a filmed version of a play. “Yes, the world is the ‘50s, but it’s not frozen there,” says Stewart. “ Trevor didn’t want it to be a period piece, a museum piece. We’re not trying to re-create the ‘50s…. It happens very clearly on a stage, in a theatre.” That theatre is the Varscona, and the filming (by Ian Jackson) happened there when that was possible weeks ago.

As Darbasie describes Schmidt’s design, the characters are in a dining room, at a large (COVID-approved) table. And since Cornelia talks about her award-winning garden and Grace gets roses as an anniversary gift, flowers and gardens are part of the visuals. “Not a literal world, but the essence of the beauty, colour and joy that gardens bring,” says Stewart of the stylization that finds its natural home in the theatre, not the cinema.

Casting Stewart and Darbasie was Schmidt’s idea from the start. And having an actor of colour as Grace is a departure in the scanty production history of the play. “That was the experiment,” says Darbasie, a playwright and director herself. “Trevor asked me if I’d be interested in exploring that….” In the Williams oeuvre, where Black characters are decidedly rare, and peripheral if they appear at all, it ups the ante on the unspoken. “There have always been inter-racial relationships,” she says, noting Thomas Jefferson’s ‘family’ of Black slaves. “But they were underground, really till after the Civil Rights Movement.”

“You can’t help who you’re attracted to…. Cornelia is in a position of power; she gets to make her own rules. She has the ability to hire Grace, and she gets to define the relationship. And for Grace as a person of colour there are great advantages, a lifestyle (that includes) an access to money, music … things she couldn’t otherwise obtain. It’s a trade-off. And most relationships are.”

So many of Williams’ plays “start with a secret, something unspoken, something so big and so heavy it can’t be spoken about,” says Stewart. “Who knows about it? Who doesn’t?” says Darbasie.

The pair have an easy and genial rapport in Zoom conversation. Schmidt’s production is an onstage reunion for them: they were in theatre school at the U of A together in the ‘90s and have only been onstage together a couple of times since (most recently in Teatro La Quindicina’s 2018 The Finest of Strangers). “We were sisters in (Chekhov’s) The Three Sisters,” says Stewart, of a first-year university production. Sisterhood is natural: “We laugh at the same things.”

And Tennessee Williams figures in both their resumés. Darbasie was Eunice, the upstairs neighbour, in A Streetcar Named Desire in Regina. Stewart was in the 1997 Citadel production of Suddenly Last Summer, notorious in Edmonton theatre history for the bizarre choice to have the playwright watching the action from up in a tree. “I’ve always loved Tennessee Williams,” says Darbasie. “He was my audition piece for the BFA (program at the U of A):  Maggie in Cat on a Hot Tin Roof. When I started teaching I’ve often used Streetcar; it’s just so well-written.

Stewart echoes the thought. “The language is so juicy, so thrilling.” She laughs. “And those three syllable back-pocket words! Where have they been hiding all these years? How can I use them every day?” In Cat On A Hot Tin Roof, it’s ‘mendacity’, she says. For Something Unspoken, it’s ‘conciliatory’. “Both characters use it. And ‘mollified’, as in
“I have never been mollified by conciliatory replies,” as Cornelia says.

Darbasie laughs. “With a Southern accent you get more mileage in your mouth.”

Along with dramaturge Mūkonzi wã Mūsyoki, the actors have been immersing themselves in research, about the colonial past of Dixie and the Confederacy, the significance of names. And as Stewart and Darbasie point out, you don’t exactly have to hunt for currency, in the open resurgence of white supremacy organizations, ideology and rhetoric. Try the news. “It’s a contemporary play with contemporary reactions,” as Stewart puts it.

And speaking as we are of the unspoken, “racism,” muses Darbasie, “is a world view. It’s systemic…. We’re all on a spectrum in terms of our awareness. Some of us are in Grade 6; some of us are in Grade 1. How do you help the person learn, that’s the challenge, about what privilege buys you… Mostly we just bash.”

Where: streamed on Vimeo, northernlighttheatre.com

Running: Friday through Sunday, and May 13 to 16