‘Questions that make the house shake with silence’: Something Unspoken streamed at Northern Light. A review

Northern Light Theatre’s exquisite little streamed version of Something Unspoken, a rarely produced Tennessee Williams’ one-act from the ‘50s, is a bit like a whisper in a bubble. Breathe too hard and it will vanish.

In Trevor Schmidt’s production, beautifully filmed by Ian Peter Jackson and running a swift 45 minutes, we arrive by air, floating down from above onto a stage (the Varscona) that seems to be a theatrical capture of a fleeting moment in the mind’s eye. An artful dream, perhaps? A clock is ticking.

We touch down in a rosy perfumed world of pale pinks and mauves, right down to the juice on the table and the jam on the toast (the design is by director Schmidt). There’s a romantic glow to the lighting (by Adam Tsuyoshi Turnbull); a chandelier seems to have broken through a paper ceiling. The windows and walls give on cascades of suspended pink-hued fantasy blossoms. In short … a rarefied world, cocooned in a sense of unreality.

That’s our introduction to Cornelia (Davina Stewart), a wealthy grande dame of the Southern belle stripe, and Grace (Patricia Darbasie), her secretary — or is it companion? — of 15 years. And their relationship in the South of the ‘50s is the play’s mystery, approached with delicate ambiguity in the script, the performances, and the assortment of closeups — eyes, mouths, hands — in Schmidt’s production.

It’s election day for the local chapter of the Daughters of the Confederacy, a stronghold of white privilege and authority in an antebellum world that is gradually disappearing. And Cornelia, who has an intense relationship with the telephone, her golden hot line to the world beyond her garden, is anxiously awaiting the affirmation that things have gone her way. “I will accept no office except the highest,” she declares, with bravado, to her social spy on location at election HQ. And it has to be by acclamation; voting is for the riff-raff.  Stewart captures a rarefied combination of imperial entitlement, neediness, and the fear, unspoken like so many things in the play, that she is somehow losing ground. 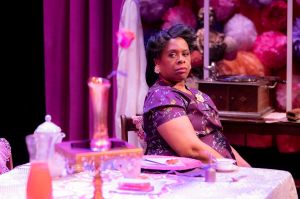 Grace’s attempts to mollify her employer are airily dismissed; Cornelia even rejects that ‘m’ word. “I have never been mollified by conciliatory replies.” In her alert, watchful performance Darbasie conveys the kind of wary calm that has hidden reserves, including a soupçon of skepticism and occasional flickers of cautious amusement that rise to one eyebrow and quickly subside.

The relationship is nuanced. And it’s fuelled by the chemistry between the actors, Edmonton stars both. What adds to the mystery, in Schmidt’s production, is race. Cornelia, who aspires to head an organization devoted to white supremacy, isn’t just run-of-the-mill white. Stewart, in a white Victorian peignoir, long white-blond hair, is ultra-white, bleached out to ghostly whiteness by the lighting. She looks chalky; even her lips are pale.

The woman Cornelia is exhorting to speak the unspoken is not just her employee, with the social and class tensions that implies. She’s black. And, as Darbasie’s complex performance conveys between the lines of a text that never mentions it, that fact ups the ante on Grace’s caution and evasiveness, her resistance to the “outspokenness” Cornelia demands.

“You mustn’t expect me to give bold answers to questions that make the house shake with silence,” she says of the hidden 15-year infrastructure of a relationship that has apparently always lived in the subtext. Moved at last to words, Grace has a lyrical moment in which she proposes that they’ve aged differently: Cornelia’s hair is the gray of iron, Grace says; her own is the gray of cobwebs. The balance of power lives in that thought.

Intriguingly, Schmidt’s production leads the subtextual path of Something Unspoken from sexual ambiguity and homoerotic repression into other more contemporary contradictions. And they’re based on race. Cornelia’s domestic desires, however enforceable by class (“a request from an employer is hard to tell from an order,” says Grace), seem to be at loggerheads with her aggressive campaign for upward mobility in a racist outfit devoted to maintaining white privilege. Is this tension between love and power the toxic residue of white privilege and colonialism as it plays out in the modern world?

“Some things are better left unspoken,” Grace concludes. The balance of power, weighted as it is in every way, is maintained by silence. And you’ll find yourself thinking about that when the roses have faded from view.

Where: streamed on Vimeo, northernlighttheatre.com