Lost sock? Ghost in the garage? Investigators from the Ministry of Mundane Mysteries to the rescue, by phone

The Ministry of Mundane Mysteries, Outside the March. Photo supplied.

What on earth could have happened to my copy of Alice in Wonderland? I’ve looked everywhere. And while we’re on the subject of missing, my polka-dot frame cheap-o sunglasses have been AWOL for 18 months? And what is that odd ticking sound on the side of the shed?

Existence is mysterious in the largest sense, true, and the future is one big unknown. But there’s this: life is riddled with minor, mundane bafflements, nagging little mysteries that might not strike society as a whole as urgent but …

They are meat and drink for the intrepid Investigators from The Ministry of Mundane Mysteries. In a series of five phone calls to you (and your family) in the course of an hour, these alert private detectives will unleash their powers of deduction and undertake to solve your own particular case. it happens here as part of  the International Children’s Festival of the Arts for 10 performances Saturday and Sunday. 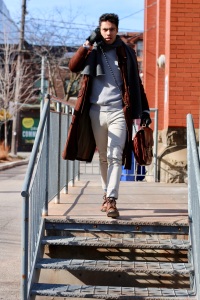 The Ministry of Mundane Mysteries, Outside the March. Photo supplied.

Custom-tailored on a case-by-case basis, The Ministry of Mundane Mysteries is an immersive theatre adventure, telephonic in delivery, by Toronto’s innovative Outside The March. Since its premiere in March of 2020, it’s played in more than 210 cities across the country and around the world, including Lima, Peru and Mumbai, India, two places hardest hit by the pandemic (you can check out the global map on the Outside The March website).

It was created 14 months ago to reimagine live theatre for a time when live performance was abruptly shut down, says Mitchell Cushman, Outside the March co-artistic director along with Simon Bloom. “It was devised largely to replace a couple of projects we had lined up,” including “a walk-about immersive production of Sweeney Todd that was all set to open.”

Outside the March is that kind of company. There are award-winning productions of hot existing plays, The Flick and Jerusalem among them, in the company archive. But OTM is  particularly known for inventive site-specific immersive productions that take audiences out of traditional “theatres” and into unexpected theatrical encounters. A Toronto native who came west to get a master’s degree in directing at the U of A, Cushman went back to his home town in 2011 with an Edmonton collaborator (Amy Keating) and a company named for a line from Tom Stoppard’s Arcadia, “one of my favourite playwrights and one of my favourite plays,” as he says. “It appealed to us; we wanted to do things that were out of the ordinary.”

Their second production Mr. Marmalade, about a kid and her very flawed imaginary friend, was promenade-style, and happened in an actual kindergarten classroom where the audience mingled with the actors.

In his time in Edmonton Cushman says he’d been most inspired by a site-specific piece he’s caught at the 2010 Fringe here: Theatre Yes’s production of Mark Ravenhill’s Shoot/ Get Treasure/ Repeat, which took audiences on a “tour” of highly disturbing theatrical experiences in four startling locations, including a Strathcona parking garage. “That piece stayed with me,” Cushman says, “the proximity, the unexpected journey of it.”

Since then Outside The March has gathered audiences and multiple awards in taking audiences into such non-traditional venues as a funeral home, an abandoned movie theatre, a video store. In one way, the company has specialized in “intimate proximity, when we cram people into small spaces,” an aesthetic that comes with queasy overtones in this world of ours. In another, though, “we’re into theatre that re-imagines what the theatre experience can be, and that has been very useful in this time,” Cushman says. And it’s been a bonus to be a company that doesn’t run a venue, as he points out.

Zoom was a possible choice for The Ministry of Mundane Mysteries, of course. Much of theatre has scrambled to find a footing on that platform in the last year. “But we began from the premise that Zoom was what we didn’t want it to be,” Cushman says. Instead, its venue, a retro one, is the phone. “There’s an intimacy and a focus about the phone,” he thinks. “By phone you can enlist the audience imagination. Which theatre is very good at doing.” And there’s an unmistakeable liveness about having an actor talk to you, converse with you, improvise from your responses.

In the interests of wider accessibility, when the phone isn’t viable, Cushman and co-director Griffin McInnes have adapted the show as a video call for an ASL version that played the Sound Off Festival of Deaf Theatre here in March. That adaptation has “other fun elements to it; the actors are in costume….”

For theatre the silver lining to the very dark cloud that is the pandemic, is “that you can cross borders.” as Cushman points out citing OTM’s new world-wide connections. “It’s a way of creating opportunities for actors and other theatre companies to produce work in this time…. I’ve never felt like geographical borders and boundaries have mattered less!”

Originally the production was designed as a series of daily 10-minute phone calls for a week. “That felt right when everyone was really stuck at home and life had even less structure…. But now, as people have found ways to return to their work lives, that no longer felt feasible, for the actors, too.”

Outside the March got funding last fall to adapt the work of the Ministry for front-line workers at a Toronto hospital “and it was just too hard to figure out their schedules.  So we adapted it for an hour, and that ended up feeling more conducive to the time,” says Cushman. “A power hour.”

When you buy a ticket to The Ministry of Mundane Mysteries, you fill out a small questionnaire. “It gives the audience members a bit of a sense of the experience. And it gives our team (of actor/improvisers) a couple of key details about the person, including the real mystery from your life you’d like solved … so we can create a personalized story.”

Very occasionally, the cast gets prompts that might be too dark or heavy to work as well (“very rare”), in an experience designed to be “light and fun.” Co-directors Cushman and McInnes have an “all-service help line for actors” in stories that “require a bit of extra attention.”

“Kids often use their imaginations to invent things, and that works well for them. We encourage adults not to make things up. But that’s flexible too,” says Cushman. “What I love about this is that there is no external audience; the only people in the audience are the ones receiving the call. There’s no other audience (the actors) need to please…. It’s custom-made and the calls are very different.”

As the pandemic grinds on and in-person restrictions change, “like everyone in the industry we’re always planning and re-planning,” he says. “We’ve reinvented a previously produced musical (yet to be announced) as an audio broadcast that we’re also hoping to play on people’s porches and in backyards this summer.” And since a pandemic side-effect is the favouring of more spacious venues over intimate spaces, Outside the March “is putting a lot of energy into a large-scale project for the summer of 2022.”

Look for Cushman’s film version of Lessons in Temperament, James Smith’s solo hit from the SummerWorks of 2016, shot in shuttered theatres around Toronto. Originally, they’d planned to bring this very intimate live piece, performed around a piano, to the High Performance Rodeo in Calgary. “If we’d called it theatre we wouldn’t have been able to shoot it, but it’s a film,” Cushman sighs.

Meanwhile, the Investigators from the Ministry are prepared to solve your personal mystery for you over the phone. “Last March we thought we’d do this piece for a couple of weeks until the the pandemic blew over. And here we are! Wonderful and unexpected all the places it’s happening.”

International Children’s Festival of the Arts

The Ministry of Mundane Mysteries

Theatre: Outside The March

Created and directed by: Mitchel Cushman and Griffin McInnes

This entry was posted in Previews and tagged audio theatre, Edmonton theatre, immersive theatre, International Children's Festival of the Arts, Outside The March, St. Albert. Bookmark the permalink.
Loading Comments...