Storytelling on film: Artists & Love (The Instagram Miniseries) at Nextfest 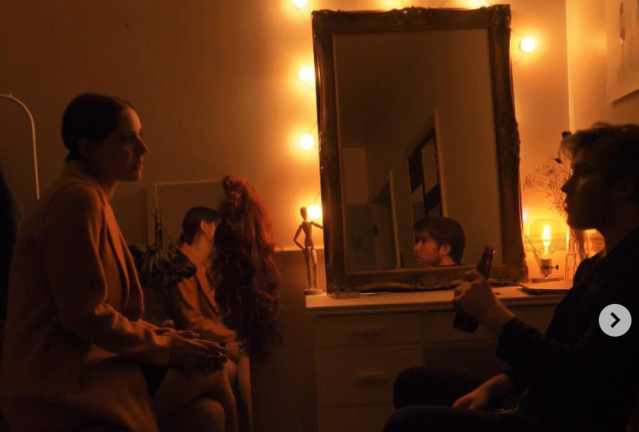 The “let’s see if…” impulse finds a natural home at Nextfest, Edmonton’s 26-year-old festival of artists emerging into professional careers.

By personality it’s  a veritable convention of natural multi-disciplinary experimenters. Have a look at the festival’s mainstage “theatre performance” lineup, and you’ll see what I mean.

Meet Emily Anne Corcoran, a U of A theatre school grad (BFA class of 2020), who’s brought to the all-digital Nextfest an experimental three-part miniseries that takes on the technical and aesthetic challenges of bringing short films to a social media site. Artists & Love rolls on Instagram, the story function.

She describes the connective tissue of her trio as “artists and moments in their lives, the complicated relationships they have with loved ones…. Each episode has its own story. The first (stars) an actor, the second a musician. And the third, our comedy, is four roommates, each with a different artistic discipline, living in a house together.”

Corcoran left Paradise to be here. To be more precise, she arrived in the West from her little home town of Paradise Nfld. 20 minutes from St John’s, with theatre on her mind, and a surprising list of film credentials on her resumé. “I got my start (acting) in film at 15,” she says of a piece called Home. “Newfoundland has a very vibrant film industry for its size. Very welcoming and nurturing.” When she got the urge to write and direct from time to time, the film industry there made that happen too.

Why theatre school? Says Corcoran “I got to the point when I wanted an education, somewhere I could fail and not cost a project its moment, somewhere to learn freely….” She loves theatre and film, “for very different reasons, for what they are,” and can’t now imagine giving up either.

“I love the liveness and the energy in the room,” Corcoran says of theatre. As for film, “if we’re going digital, let’s go all the way!” was her mantra as new (which is to say new new) pandemic restrictions came into effect in April. “Mere days from shooting” the original series she’d pitched had to be scrapped. So, pivoting on the pandemic dime, her Nextfest project had to be executed within a bubble that included her three room-mates, all fellow actors from theatre school.

“I looked at what I had at my disposal: a house, three actor roommates, and a script I’d had on the shelf for a couple years.” Ah, and a Panasonic camera on loan for the year from a school. 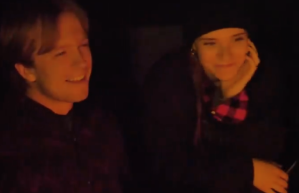 That script became episode 2, which happens in a musician’s dressing room after a concert. And Corcoran figured”OK, this is a story I’ve always wanted to make, this is an opportunity: how can I make it fit into a greater series?” Artists & Love was born in that question, and Corcoran’s interest in exploring artists as vulnerable creatures haunted by the past and its persistent ghosts. “It’s the way as artists the people we meet never really leave us; they seep into our work and our beings.”

In the three episodes, the familiar spaces inhabited by the artist-characters are invaded by their own personal ghosts. Episode 1, which happens during  the intermission of a play, an actor is visited by a former lover. A muse, his first love, arrives in the musician’s backstage dressing room in episode 2. Jackson Card, who plays the musician, has been learning the guitar during lockdown, as Corcoran reports. “He arranged, and played, the cover of an old Irish song The Wild Rover.” Episode 3 happens in and out of a house shared by artists who, in their own ways, are chafing at an impasse, a creator’s block in lockdown. The cathartic group dance and scream at the climax is something you’ll welcome in your bones.

Instagram was Corcoran’s app of choice, “my favourite at the moment,” she says. “I feel it’s intuitive, user-friendly and I hope that will help bring people to the project. You just click, and the whole thing plays through; the only choice you have to make is to continue watching.”

As film-making tools and distribution methods, Instagram and its fellow sites, YouTube or Vimeo among them, are an antidote to the inaccessible expensive-ness of film. “For people like me, making films with friends,” the cost of applying to individual festivals in order to build a circuit is instantly beyond reach.

Corcoran opted for a series of shorts rather than one extended piece because each episode “felt like a moment…. It’s glimpses into their lives You don’t get the rest of the the story, the whole picture…. We’re just peeking in for a moment. I really like that!” Besides, our attention span for stories unspooling on phones isn’t exactly unlimited.

“That’s one thing I really love about short films,” says Corcoran. “To tell your story and make you fall in love with your characters in under 10 minutes” is a particular, and considerable, achievement.

And that wasn’t the only challenge in Corcoran’s experiment in translating storytelling and filmmaking onto Instagram. “All my learning in film-making is how to compose a shot horizontally.” The “aspect ratios” for social media sites like Instagram are vertical, for the benefit of phone-users. She laughs. Using “a frame that’s so tall was a little more complicated than I thought it would be.”

Meanwhile, the house of artists that Corcoran, her partner, and their two best friends (the stars of Artists & Love) share has become a film studio. “And it’s been in disarray since April!” That might be a whole Nextfest sitcom series in the making.

When: every day of the festival through June 13