A rollercoaster year for high school theatre (with productions to match) 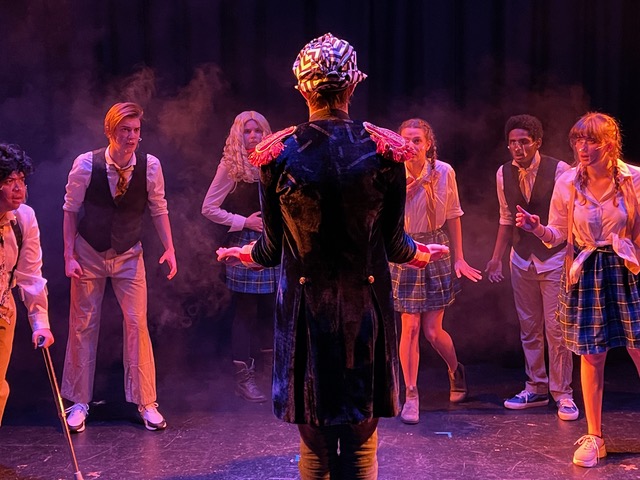 “It’s been a rollercoaster year.” — Everybody

In a strange year-plus that’s all but stolen theatre’s go-to all-purpose show descriptor, the rollercoaster, there’s something witty (not to say unnervingly à propos) about the macabre little indie Canadian musical that comes our way Wednesday via Broadway On Demand.

In Ride the Cyclone the members of a high school glee club from the dying prairie town of Uranium, Sask. have themselves died — in a freak rollercoaster accident at a travelling carnival. The musical, by Jacob Richmond and Brooke Maxwell, is one of three shows from Scona Theatre — Strathcona High School’s theatre department led by Linette Smith — that run online this week.

The seven characters are singing from “the weird world of limbo,” as Smith puts it. They’re exploring the might-have-beens, the identities they haven’t fully been able to live. “When you’re between worlds, between realities, what happens to you physically, spiritually emotionally? This felt like a great thing to investigate. This year.”

Simultaneously, Scona is also presenting two plays, on the invaluable FringeTV platform. Smith chose both for their particular resonance for her high school charges. In Jordan Tannahill’s Concord Floral, a mystery, a ghost story, and an exorcism in one, “there’s a secret that no one can talk about,” says Smith. “A sense of weight the world is carrying.” It’s a plague of sorts, in a framework inspired by Boccaccio’s  14th century Decameron. And its teenage characters have selves they want the world to see, and selves they want to be hidden.

“Inside all the protocols, how do you find your own voice?” It’s a question for this moment.

A cohort cast of 12 is in the third, Metamorphoses, adapted by the American playwright Mary Zimmerman from Ovid’s poem. And, as the name suggests, it’s about change, transformation, which could hardly be more timely.

Smith opted for the extreme complication of three simultaneous productions instead of the usual big-cast Scona musical of the year, because pandemical times called for small groups. “And so many people auditioned, we couldn’t just do one show with seven people….”

Speaking as we are of rollercoasters and metamorphoses, producing theatre in a pandemic year, as every theatre company and school has discovered, amply qualifies, on both countrs. Since singing, proscribed for much of the year, is involved, musicals have been especially tricky. The students, who were sometimes at school sometimes online at home, were valiantly flexible, Smith reports. In a world of constantly changing restrictions, “They really believed that whatever the project had to become ‘we’re doing it!’.”

For the musical, “which had to be recorded a voice at a time,” Smith and crew built a sound booth. “Then the cast of seven came in one at a time over a few weekends, and sang through the entire show…. Then we had to mix it together.”

Rehearsed online, it was filmed outside, on the weekend before a second big shutdown would push a cast of seven plus crew over the 10-person outdoor limit. That’s authentic precipitation in the Ride The Cyclone footage. “That weekend it poured the entire time; it never stopped.” They used the track and field tent, and the school’s mechanic bay. They took breaks so the students could warm up, ‘spread out six feet apart in a hallway.”

And rules, and the numbers, kept changing. The two plays were rehearsed in person, then online when the schools closed in December, then back live, then back to online again. “We dropped off garment bags full of costumes and props” to students at home, along with laptops from the school library, “to get better and more consistent film quality.”

For Concord Floral, “I wanted everyone to have a black backdrop, so we cut up black cloth, and drove it to everyone’s home, along with a light source,” says Smith. For Metamorphoses, they scoured the inter-web for backdrops. Green screen? Parents raided their linen closets for blue or green bedsheets. Garages got reconfigured; so did kids’ bedrooms, to make space for choreography.

“After this year I feel like doing a big musical live for in-person audiences will be way less of an Everest climb,” Smith laughs, thinking of the logistics, and the workshops on outdoor sound or lighting she signed up for in her own time.

“These students do get a happy ending because they get to tell these stories, and share them. They’ve been able to learn from each other, learn to do theatre in different ways…. All of us are longing for next year, the moments when you can feel the audience breathe with you, hear a sniffle.” Smith pauses to reflect on the three productions. “Change is necessary. Growth is necessary. Sometimes we have stones in our pockets that weigh us down. We can let them go.”

“But we really lamented the loss of our pool.’