Breaking out of our cages: Night from Major Matt Mason in Rundle Park. A review.. 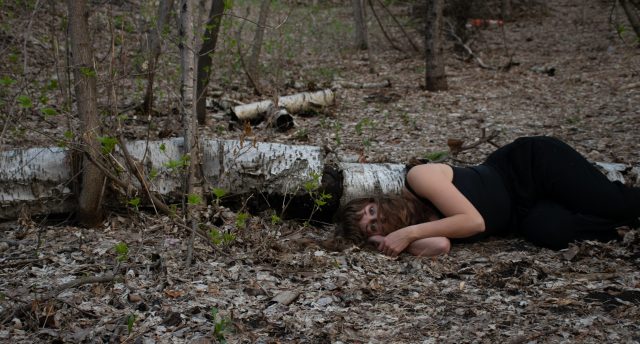 Rundle Park on a cloudy night is an eerie place.

A network of cement roads and parking lots, all abandoned. They seem to be holding at bay the woods, the dark tangle of trees, the taller grass, the shadowlands by the river. You get there by descending into it. You’re on the edge of the city, but there’s no sign of it.

The wild and the human pushback: that tension has everything to do with the experience of Night. The solo “drive-by” play from the Major Matt Mason Collective is live theatre you actually go out to (at 10 o’clock on a summer night when it isn’t quite light, not quite dark, but getting there).

“Welcome to the theatre!” says an exuberant masked artist (Mac Brock, interim producer of the host company Common Ground Arts), waving expansively at the great outdoors as we arrive. We park in a (distanced) circle, facing inward: a circling of wagons against outside forces? It’s theatre in the round for people in cars (with 10 people max on lawn chairs), listening to the first-person soundtrack via car radio FM.

After so many months in the cage, connected to the world by screen, breaking out in itself counts as a bona fide thrill. Which will put us in sync — disturbingly, revealingly — with the character we meet in Geoffrey Simon Brown’s play, directed by Yousuf Liepert.

This person, played by Zoë Glassman, a particularly magnetic and intensely physical performer, is fretful, struggling to break free of … something. They’re seeking moonlight. “Nothing is wrong; it feels like something is wrong,” we hear them say in the voice-over track. “Just being OK. All the time. It feels endless.” Tomorrow, they tell us, “the bandages” come off.

Something has happened to the protagonist (information leaks out, in tiny details); they’ve washed up at home, back in their childhood room. On daytime outings with their well-meaning parents, they’re repelled by human contact and the human gaze. They’re distracted by every movement — of an ant, a bird with a worm, a rabbit, a dog — overtaken gradually by the overwhelming urge to run and disappear from human sight, to howl, to attack, to merge with Nature. They’ve covered the mirrors, and retreated to a lair; they have a sense of transforming. Hands are becoming paws. They’re in exile in the world of humans; they’re becoming a wolf.

Night is fascinating and powerful in ways that elude simple explanation but feel very much of the moment. Don’t you recognize that strange sense of not being quite oneself? Of being somehow between identities and not quite human as we being to emerge, newly created agoraphobes, from the pandemic bubble of time? And here’s a character who’s not only between identities, but between species. Which is, to put it mildly, an awkward place to be if you’re on public transportation.

Glassman is compelling as a character who’s not at home in their own body, ricocheting from moments of absolute stillness into startling 0-to-60 motion (choreography: Clarke Blair). That sense of hurling oneself against constraints is reinforced by Elise CM Jason’s scenography, a circle closed by the audience and lit from the circumference, with the sole props a circular rug and a coat rack.

Night (which would never work as a matinee), and its real live nocturnal circumstances outdoors, release a whole range of free-floating metaphors. That’s the beauty of it. What struck me is that you give up something, some sort of vital force, in order to be human and be with other humans. In order to “be OK” and wrap yourself in, well, love and support, you accommodate. You’ll be discussing, though. And that’s a great human feeling.

Running: Thursday through Sunday and June 24 to 26