A real live in-person season at the Citadel, starting this summer. The Citadel welcomes audiences back to the big brick playhouse

And they’re back live —starting small in August and getting bigger —  in a real live in-person season.

At a well-named online Happy Hour Thursday, Citadel artistic director Daryl Cloran announced a big line-up of 10 live shows that will welcome audiences back inside the big brick playhouse downtown — during the summer in reduced numbers and then, hopefully, expanding gradually into full capacity.

For the Citadel’s 54th or 55th season (depending on how you count the travails of pandemic shutdown year), he’s gathered an assortment of shows that includes five world premieres and seven plays by Alberta writers. The line-up of four productions in a ‘Summer Season’ through October, and six mainstage shows starting November with the Holly Lewis farce The Fiancée, is the result of season-planning that’s been adjusted over and over,  says Cloran.

Some titles are familiar from the Citadel season announcements of January and then June of 2020; some deferred, rebooked, then delayed again. “So many shows we’d  already announced and sold tickets to…. We wanted to see as many of those through as possible while still not being 100 per cent sure when things would be open, and if they’d stay open.”

“We wanted to start back slowly, and welcome audiences back at a pace they were comfortable with,” says Cloran of a Summer Series that opens July 31 with Heaven.

Originally part of the small-cast reduced audience Horizon Series, the solo play by Calgary-based Cheryl Foggo (John Ware Reimagined) chronicles the story of a Black school teacher who arrives in Alberta’s Amber Valley in the 1920s. Patricia Darbasie’s production, which stars Helen Belay, runs through Aug. 15 in the 700-seat Shoctor Theatre, for a planned audience of 100. That number, says Cloran, is adjustable according to COVIDian restrictions of the moment.

The other Horizon play is Tai Amy Grauman’s Métis adaptation of the Stephen Massicotte Canadian classic Mary’s Wedding. It’s been online in a digitally streamed version since this past December but “it never got beyond its final dress rehearsal” before shutdown, as Cloran points out. So Jenna Rodgers’ production, starring Grauman and Todd Houseman, gets its first live audience in the Shoctor Theatre Aug. 28 to Sept. 12. 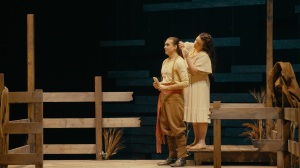 In a Summer Series that includes September and October (which in Edmonton exudes “cautiously optimistic”), audiences finally get to see Belinda Cornish’s stage adaptation of The Garneau Block, Todd Babiak’s 2006 hit novel, originally slated to premiere in the 700-seat Maclab Theatre in March of 2020. Rachel Peake’s production was shut down the night before the first preview. Narda McCarroll’s set has been sitting intact on the Maclab stage ever since, ready for use after dusting.

At a dozen actors, The Garneau Block is not a small-cast show, true. “But “it’s such a symbol for us, that we’re back,” says Cloran. “It feels like an important way for us to start welcoming people back.” And not least, says Cloran, “because it’s a story about Edmonton, adapted by an Edmonton playwright, from a novel by an Edmonton writer.”

The theme could hardly be more topical: idiosyncratic neighbours in a signature Edmonton ‘hood coming together to devise a way to save it. And “It’s not dependent on us welcoming 700 people a night. If we can welcome only, say, a third (of capacity), we’re still going to do it!” It runs Sept. 23 to Oct. 10.

The finale of the Summer Season is the Punctuate! Theatre production of Matthew Mackenzie’s hit Bears, originally slated for Citadel’s Highwire Series (“designed to help amplify the work of great local companies”). The play, which has had hit runs in Toronto and on the West Coast, comes to the Maclab stage Oct. 21 to 31, trailing multiple awards. Sheldon Elter stars.

The mainstage season-opener (Nov. 6 to 28) is the premiere of a new “big fun zany farce” with all the classic door-slamming bona fides — and one clever reversal. Holly Lewis’s The Fiancée, short-listed last week for the 55th annual Alberta Playwriting Competition (and Introduced to audiences in reading form at the recent Collider Festival), chronicles the escalating chaos the protagonist introduces into her life by getting engaged to three men off to fight in World War II. The crucial farce glitch is that when the war ends, they all come home against the odds, and arrive at her place on the same day.

“A great way to welcome people back to the theatre,” says Cloran. “And Holly has done such a clever job of taking the trope we all know and turning it on its head: women juggling men, hiding people from each other, wearing disguises, tripping over things, getting cake in the face.…” Six actors (led by Helen Belay) and “at least as many doors,” says Cloran, who directs.

David van Belle’s full-bodied 1940s adaptation of A Christmas Carol, starring Ted Dykstra as a department store with its World War II and post-war song list, is back to live in-person (Nov. 27 to Dec. 23)  for its third Yule season after a 2020 incarnation on film. “I was thrilled that when so many other companies were doing one-person Christmas Carols, we could still do our giant production,” says Cloran who directs. he says. “The team rallied to make something beautiful.” That film version (limited to Canada because of the infinite complications of song rights) will be accessible again this year, alongside the live production.

Philip Akin, former artistic director of Toronto’s Obsidian Theatre, directs a Citadel production of The Royale Feb. 5 to 27. The drama by American playwright Marco Ramirez chronicles the fortunes of a Black boxer in 1905 in his quest to be the heavyweight champion of the world. “The way it’s told theatrically is incredible,” says Cloran of “a play about race, about place in history.” There’s no actual boxing in it; “it’s all told through dance, clapping, stomping, super-physical language.”

On the grounds of caution vis-à-vis travel, partnerships, and logistics, the 2021-2022 lineup deliberately saves the biggest-cast shows — including three that had been announced for last season — for the second half of the season. One is the much-delayed Peter Pan Goes Wrong (Feb 26 to March 20), an international collaboration with surprisingly local connections.

The comedy, about an earnest community theatre doing their best to put on an ill-fated production of Peter Pan, is the work of the Brit company Mischief Theatre. Director Adam Meggido is known to Edmonton audiences for his improv virtuosity in Die-Nasty’s Soap-A-Thons. The 12-actor Citadel production, a partnership with Vancouver’s Arts Club Theatre, is the North American premiere, “a testing ground” says Cloran, for expansion into U.S. markets including New York, where its companion piece The Play That Goes Wrong has been a long-time hit.

The premiere of Jane Eyre, a 10-actor adaptation of the Charlotte Brontë novel by the star Canadian playwright Erin Shields, was originally slated to happen this past March. Now, one of literature’s most compelling heroines takes to the stage March 24 to April 10, 2022, in a Cloran production that stars Hayley Gillis and John Ullyatt. “Low-tech theatrical magic,” Cloran has said of the storytelling.

Like Jane Eyre, Kenneth T. Williams’ The Herd (April 2 to 24) is part of the in-person  2022 edition of the Collider Festival, a Citadel initiative that was all online in this pandemic year. It’s designed, says Cloran, to feature full productions of new plays, surrounded by readings of works in development, much like the late lamented PlayRites Festival at Calgary’s Alberta Theatre Projects.

A Cree playwright from the Gordon First Nation in Saskatchewan, Williams (Cafe Daughter, Thunderstruck) was the first Indigenous playwriting graduate at the U of A, where he’s a drama prof these days. Cloran describes his latest, which spins from the possibly miraculous birth of twin white bisons on a First Nation ranch, as “a great script, very smart, with Ken’s (signature) sense of humour….” Kevin Loring, artistic director of the National Arts Centre’s Indigenous Theatre, directs the three-city partnership between the Citadel, Toronto’s Tarragon Theatre, and the NAC.

The finale of the season Cloran announced Thursday is the 2008 musical 9 to 5, based on the 1980 Dolly Parton film. Music and lyrics, needless to say, are by the grande dame herself (just try extricating the absurdly catchy title song from your brain), book by Patricia Resnick. Rachel Peake, late of the Citadel and now of the Arts Club, directs the production (April 30 to May 29). Casting awaits.

“It’s a really big fun season,” says Cloran. In audience capacity and protocols, “we can adjust as needed as we go forward…. For all of us it’s really emotional experience to return to the theatre! Hopefully by the time of A Christmas Carol, we’ll be back together, shoulder to shoulder, having a great time!”

A Christmas Carol, adapted from the Dickens novella by David van Belle (Nov. 27 to Dec. 23)