Found: the festival of surprising encounters is back to live performance

Searching for a find at Found….

It’s the 10th anniversary of a festival that has taken audiences to unexpected encounters with art and artists — in places they never expected to find themselves.

The unconventional engagement, the reimagined connection between creators and their audiences … that’s what the Found Festival’s brigade of experimenters and fomenters is all about. The pandemic has been a test of that kind of creativity. And times being what they’ve been for a year and a half — let’s face it, isolating, uncertain, and weird — there’s a celebratory feel to the 2021 edition of the festivities, returning live to Strathcona Thursday for a four-day run.

“Artists have had to be really nimble and agile,” says Found Fest director Beth Dart of the ever-changing COVID protocols. And she has the Found programming to prove it. After a the 2020 Found that wrapped its creative ingenuity valiantly around pandemic lockdown (I’m remembering the drive-through folk opera Chamber Obscura and the “self-guided immersive outdoor experience” Home Suite) the 2021 edition marks a return to live performance, in front of a live (masked, capacity-reduced) audience, for nearly all its programming.

The festival gave the 2020 roster of artists the option of deferring a year or creating something COVID restriction-proof as an alternative, says Dart. Most took the deferral option, and it was offered again this year: “folks had to be prepared to be flexible depending on the restrictions.”

And flexible they’ve been. The free Music Series curated by Mustafa Rafiq, for example, happens as a live outdoor cabaret in the back alley behind the Backstage Theatre (at the ATB Financial Arts Barns). As Dart explains, the patio capacity of is reduced by 40 per cent to 50. That locale, incidentally, is where you’ll find the Found box office and info tent. And it’s where you can find yourself tucking into a drink and food (from the Fringe Grounds Cafe) with your household/ cohorts.

The Found Festival poetry showcase, Snap If You Can Hear Me, curated by Dwennimmen (artistic producer of the Edmonton Poetry Festival), is a kind of poetry stroll, a tour to four pop-up locations, with four poets in place performing at each. You sally forth from at McIntyre Park (aka the Gazebo Park) adjacent to Walterdale Theatre, 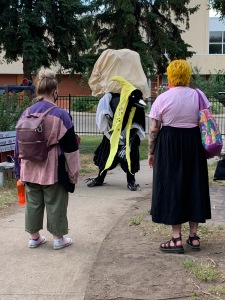 Puppet Pub Crawl is the brainchild of designer/ scenographer/ “experimentalist” Even Gilchrist, Found Fest’s Fresh AiR artist-in-residence. It takes us on a tour of seven hidden Strathcona locations to meet seven very different puppet tale-tellers, created (both the puppet and the tale) by seven theatre artists. “You’re out on the town, making fleeting connections with strangers,” says Dart, who describes Gilchrist as “a rising star as a creator and collaborator” (meet him in an upcoming 12thnight post).

The logistics are “pure Rube Goldberg, basically,” Dart laughs. There are only six tickets to Puppet Pub Crawl per night of the festival, one ticket per show, with each ticket good for up to six members of a cohort or household, with timed departures of successive audience clusters every 15 minutes.

The one place you’ve never been able to expect to find Found was an actual theatre. This year, that’s different, too. David Gagnon Walker’s interactive This Is The Story Of The Child Ruled By Fear happens in the Arts Barns’ Studio Theatre.

This is the Story of the Child Ruled By Fear, David Gagnon Walker, Found Festival 2021. Photo supplied

Walker has been at the festival before. In 2017 he locked himself in an apartment and wrote an original play in 72 hours, while the audience watched the progress of his script on Google Docs. With This Is The Story Of The Child Ruled By Fear, a reflection on the times to which we’re struggling to adapt, he invites the audience (a maximum of 14, 25 per cent of the theatre capacity) to take parts and tell the story with him. “There’s room for different levels of comfort in participation,” Dart reassures.

The staged reading of The Funeral by actor/ movement artist-turned playwright Marina Mair Sanchez at South Side Memorial Chapel (8310 104 St.) is a preamble. “We’re hoping to support its development and hopefully have it in full production at Found Festival next year,” says Dart.

Running Live is a creation — part live Zoom-based, part pre-recorded dance — of actor/ dancer/ choreographer playwright Richard Lee with movement artist Deviani Andrea. Billed as ‘a vlogcast/ river valley dream sequence/ digital hallucination,” it’s brought to us from their respective balconies. There’s a maximum of 30 tickets available for the live Zoom performance Thursday (where the audience can help shape the imagery); after a quick edit, it will be available for streaming during the festival.

As Dart explains there are three parts to Letter to Audiences, brought to the festival by artists Natércia Napoleão and April MacDonald Killins. “It includes a survey for Edmonton audiences about equitable representation on Edmonton stages and how they see themselves on those stages, podcast episodes discussing diversity and equal representation, and an invitation to artists and community members to have conversations on the subject.

Dart notes that it’s “the first phase, the data gathering and interviewing, to build toward a major project down the road…. It’s a pretty important conversation for us to be having right now. The Great Pause in the performing arts industry has given us time to reflect, to think about things. But reflection requires action as well.”

Where: locations in Old Strathcona