The Grindstone is ready to crack you up: the Comedy Fest is back 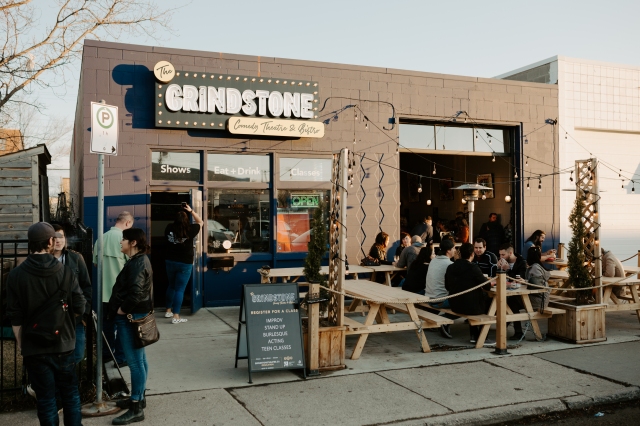 In a laughter-parched land, there is hope.

After a year of set-backs, re-sets, contortionist pivots and ingenious work-arounds involving the great outdoors in all kinds of weather, the Grindstone Theatre in Old Strathcona launches a second edition of its Comedy Festival Wednesday. 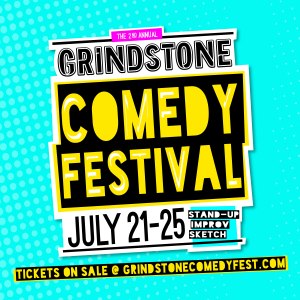 Try as he might, the Grindstone’s indefatigable artistic director Byron Martin had to cancel last year’s fest, all planned and contracted as it was. True, complicated logistics didn’t prevent him from throwing a last-minute five-day socially distanced “mini-Fringe” at the end of August. The Re-Set Festival had nine rotating improv, stand-up, and sketch comedy shows in two tiny venues, including the Grindstone’s 84-seat bistro headquarters on 81 Ave.

After all, Martin himself, who must have been terrified by a moment of inactivity as a child, is a spontaneity specialist. A rare example of a triple-threat/impresario, he’s also an improv artist, the creator of (and participant in) the hit show The 11 O’Clock Number, an entirely improvised musical that’s part of the Comedy Fest. And improv artists are trained to say Yes.

“I reached out to the 2020 artists first,” Martin says of the lineup of talent for the the five-day festivities. He lost a couple of headliners in the intervening time, “but I’m excited and feeling hopeful about this year!” 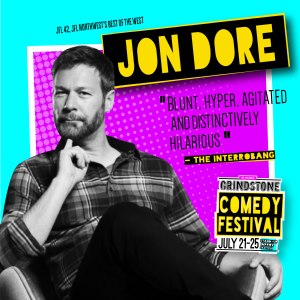 The Comedy Festival has five days of indoor shows (two shows a night) in the Grindstone Theatre, plus entertainment on the new 250-seat Howl & Roar Records Outdoor Stage in the Trinity Lutheran parking lot next to the Grindstone (mask-wearing is “encouraged but not “enforced”). Creating that second venue outdoors was a response to pandemic vagaries: “we were locked down and re-opened so many times,” sighs Martin.

The Grindstone has also reno’ed a 120-seat venue under the Mill Creek Cafe, “down the hall” from the Sewing Machine Factory on Whyte. As Martin describes, the new Grindstone Studio is a rehearsal studio and stage, and contains the office of Grindstone’s “education manager.” Grindstone holds comedy classes of all kinds, and the upcoming Camp Grindstone is (July 26-30 and Aug. 23 to 27) is “a weeklong exploration of Grindstone’s signature classes” in improv, sketch writing, performance art, musical theatre.

Actually, Grindstone, which hosts “events” for every known holiday and then some, is home to no fewer than four festivals this summer. After the Comedy Fest comes a big outdoor dance party/disco party July 31 and Aug. 1, at Louise McKinney Park. Then Grindstone is a Fringe BYOV with two venues — the bistro theatre headquarters (the outdoor patio space will be the show lobby) and  the new Grindstone Studio — each with  five or six shows. Then, there’s the second annual Mural Festival…. Even the tireless Martin allows that “it’s a bit overwhelming now … but it feel great!.”

And all of the above, of course, is in addition to running a bistro and bar, with his brother Joses Martin, the Grindstone’s producer.

The idea of “an indie comedy festival to support local comedians” in a combo of improv, sketch, and stand-up, is irresistible to Martin. The Grindstone is where Girl Brain, for example, first gathered fans. He says mildly, “it’s a pretty safe bet you’re gonna laugh.”