The Fringe returns to its experimental roots: tickets go on sale Wednesday at noon

The name of this year’s edition of the Edmonton Fringe is itself is a spirit-lifter, par excellence: Together We Fringe. It’s a salute to live gathering — in a nutshell exactly what we’ve been missing in the cruellest test of perseverance and ingenuity the theatre has ever known. 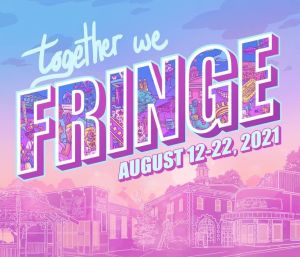 Tickets for Together We Fringe: A Fringe Event go on sale at noon Wednesday, for a unique edition of our summer theatre extravaganza. Togetherness — “but with elbow room!” as Fringe director Murray Utas puts it — marks the Fringe’s return to live theatre, inside and out- (in addition to digital programming).

After the heartbreaking cancellation last summer of Fringe #39, The Fringe That Never Was, the mighty Edmonton Fringe enters its ‘40s dramatically smaller, “hyper-local,” trimmed, modified and constrained for safety. Utas calls it “a one and done situation … an anomaly year after the heartbreak of the one we cancelled.”

And since the Alberta government has deliberately rejected all considerations of public safety in this second pandemic summer, it’s the theatre, its artists, and this the oldest and biggest Fringe festival on the continent, who’ve stepped up with detailed precautions. “We invest in human beings,” says Utas pointedly.

The epic dimensions of our beloved summer giant have shrunk for this year. Instead of the 260 shows in some 50 indoor venues of 2019’s monster Where The Wild Things Fringe, you have 50-plus productions to choose from, dispersed through 11 indoor venues (schedule and show information at fringetheatre.ca). Each is reduced to 60 per cent audience capacity for social distancing, and mask-wearing is obligatory indoors.

Instead of the usual 11 official Fringe venues, programmed by lottery, there are but three: the Westbury Theatre, the Backstage Theatre, and the Old Strathcona Performing Arts Centre. A fourth, the Roxy on Gateway, renamed pêhonân (Cree for gathering or waiting place) for the Fringe, is home to Indigenous artists, in eight one-off shows, plus a variety of audience engagement events, interviews, conversations, all curated by the Fringe’s new director of Indigenous strategic planning Josh Languedoc. More about this in an upcoming 12thnight post. And there’s an outdoor Vanta Youth Stage in Nordic Park (in Lighthorse Park, 10345 85 Ave.), devoted mostly to youth programming.

The rest are BYOVs (bring-your-own-venues, acquired, outfitted and curated by artists): two at La Cité francophone and the Grindstone Comedy Theatre, plus the Garneau Theatre, the Varscona, and the Yardbird (curated by Rapid Fire Theatre).

So, the Fringe playbill of 50 or so shows is only about a quarter the size of the usual festival. All the shows in the lotteried venues have been filmed for online viewing; most were slated for last year. When the Fringe was cancelled in 2020, those artists got first right of refusal.

For the first time in its own 32-year history the Freewill Shakespeare Festival will be at the Fringe, doing fast and furious small-cast portable versions of Macbeth and Much Ado About Nothing, the former indoors and the latter on the Vanta outdoor stage (stay tuned for a 12thnight post about this).

There are names you’ll know from Fringes past. God, for example, will be present (Mike Delamont’s God Is A Scottish Drag Queen celebrates His 10th anniversary with a “best of” show.) Rebecca Merkley, the multi-faceted playwright/director/musician, brings a fourth instalment of her sparkling Merk du Soleil series: Merk Solapocalypse is part spoof, part absurdist satire, part jukebox musical, part pop-mashup, part meditation on the pandemic and its devastating effect on the arts. Gordon’s Big Bald Head, the deluxe trio of Mark Meer, Ron Pederson and Jacob Banigan, is back with MasterThief Theatre, in which they improvise everyone else’s show. Die-Nasty has a Fringe edition at the Varscona.

Trevor Schmidt is premiering a new play at the Fringe (Destination Wedding). Ellen Chorley has a new kids’ play (Win The Warrior).

There are new names, too, and up-and-comers. And there’s a lot of improv. But then, as Utas points out in full existentialist philosopher mode, “the times are uncertain; everyone is improvising; we’re all improvising!”

Perhaps the biggest change you’ll notice this year, though, is in the Fringe’s massive carnivalesque crowd scene. Ingenuity was required to modify it for distanced safety, and still retain a sense of “the Fringe experience,” that indefinable but palpable sense of discovery, altered consciousness, and the smell of mini-doughnut grease.

In honour of 40 years of fringing the infinitely wry and misleadingly mild-mannered playwright/director Gerald Osborn has devised a free audio walking tour of early Fringe sites of note, starting with the Princess Theatre. From the dank basement of that establishment, “Father Fringe” Brian Paisley (voiced by Utas, whose general lingo has something in common with the Fringe founder) launched a summer theatre experiment in 1982 — come, bring a show, see if anyone wants to see it — that turned out to transform a city.

“This festival is honouring the process of creating,” says Utas of this summer’s unique edition of the Fringe. “It celebrates the not-quite-done, the ‘I don’t know, let’s figure it out as we go along’…. The Fringe was as always an experiment. And now, the first and biggest, it’s still a one-off.”

Ticketing: You can book tickets online (tickets.fringetheatre.ca), on the phone (780-409-1910), or (the not-preferred method) in person at the box office in the ATB Financial Arts Barn (10330 – 84 Ave.). Artists set the ticket price for live shows to a $13 max, plus a $3 Fringe service charge. The surcharge is reduced to $1 for shows with ticket prices under $10. For digital versions of live shows, Utas explains, “we’re letting the audience decide the ticket price” between a $5 minimum and $13. “That way they know they’re not getting Netflix!”