‘Burning it down, admitting defeat, and starting over’: Northern Light Theatre announces its 46th season

Here’s a question that speaks, with eerie precision, to our moment: how do we find the resilience to start again after a setback?

The three mainstage plays in Northern Light Theatre’s live upcoming 46th season, “Burning It Down, Admitting Defeat, And Starting Over” are all about that struggle, says artistic director Trevor Schmidt. Two are premieres by Edmonton artists; the third is by Chicago playwright Mickle Maher. “They’re stories about people who fail at something and have to start over. Artists who attempt something that gets stopped, or obstacles happen.… People who have to decide whether to try again. Or not.” We all know something about that.

The season opener, which brings Northern Light back to the Varscona Theatre stage for the first time since 2010, sets this proposition forth in a graphic way. Based on a true story, The Great Whorehouse Fire of 1921 takes us to Big Valley, AB where an entrepreneurial woman has started a brothel. “Spoiler alert! The house burns down!” says Schmidt. 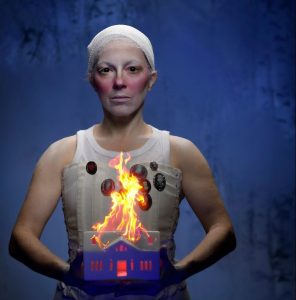 Linda Wood Edwards’s two-hander imagines the madam’s unlikely friendship with a prim and proper church lady. The brothel conflagration, reported in the Big Valley News, happened on Dec. 26, 1921. No investigation ever took place and charges were never laid, though the assumption is that the townswomen joined forces to do it.

The earliest incarnation of Wood Edwards’s play was at the 2018 Fringe, the work of Maa and Paa Productions, an indie company devoted to animating the historical archive. And the season theme of rebounding after setbacks resonates weirdly with the play’s history. Sue Huff, who co-stars in Schmidt’s NLT production with Twilla MacLeod, was in that Fringe debut outing of The Great Whorehouse Fire. Mere weeks before the Fringe she was felled by a terrible mystery infection and could scarcely move for a time. The staging was re-conceived so that she could play Mme Hastings — “earthy, rough, funny,” as Schmidt describes the character — in the sitting position.

The Hunchback Variations, an absurdist comedy in 11 scenes by Mickle Maher (the co-founder of Chicago’s Theatre Oobleck), pairs two of history’s best-known Deaf artists. Beethoven and Quasimodo, the bellringer of Notre Dame. They’re collaborating to find a sound,  Chekhov’s famously enigmatic stage direction at the end of The Cherry Orchard: “ Suddenly a distant sound is heard, coming as if out of the sky, like the sound of string snapping, slowly and sadly dying away.”

“Funny but extremely moving,” says Schmidt, who has a history at Northern Light of introducing us to the work of playwrights we didn’t know about. The Hunchback Variations is a discovery of a few years ago, he says of the 2015 play that is only the third in his tenure of nearly two decades at NLT to feature an all-male cast.

The elliptical structure is highly unusual, as he describes. “It starts and goes back and starts over and goes back and….” And the questions it asks, in its unique way, speak powerfully in 2021. “It’s about collaborating as artists, and if you can actually do that and be successful. How do you come back from artistic failure? Bolster your own ego in order to face a failure and move on? It’s the idea of ‘you’re only as good as your last (creation)’….”

The last few years have taken a toll on artists, not least working in a part of the world where the whole industry is treated with so little respect. “Your identity as an artist has been shaken. It’s ‘why am I doing this? Am I ever going to get anywhere? Is my time up? Am I still relevant?’”

Schmidt’s production, the professional Canadian premiere (Jan. 14 to 29, 2022), stars Ian Leung as Beethoven and Dave Clarke (a sound designer himself as well as an actor/ playwright) as Quasimodo.

The grand finale, Two-Headed/Half-Hearted, is the NLT premiere of an original “small-scale musical” by Schmidt and Kaeley Jade Wiebe, a young Métis singer-songwriter/ actor/ visual artist (and recent U of A theatre school grad). Schmidt describes his collaborator as “an exceptional up-and-comer who’s really exploded onto the indie music scene this spring and summer.”

Two-Headed/Half-Hearted, which tells the story of conjoined twins Juno and Venus Hollis, “isn’t your standard musical,” says Schmidt, who’s written ‘non-standard’ musicals before (Klondykes with Darrin Hagen and Water’s Daughter with Ryan Sigurdson). He calls it “a prairie gothic song cycle” in which “the twins talk about the mythology of their family and other conjoined twins in history. And whether they can survive, as independent people apart from each other.”

Needless to say, the premise poses unusual physical challenges for the cast. Wiebe’s co-star Rebecca Sadowski, a theatre creator best-known perhaps for dance and choreography, will have the movement challenge of “not being able to separate herself from another body,” as Schmidt says. “Between them, they have three arms in the show, and they’re going to play the guitar! One has to do the finger, the other the strumming.”

Two-Headed/Half-Hearted runs April 22 to May 7, 2022 in the ATB Financial Arts Barn.

An add-on to the season is an online encore Oct. 1 to 31 of the only production from NLT’s 45th anniversary season that happened live and in-person. For the spooky season Kristin Johnston will reprise for streaming her stellar performance in Schmidt’s gothic tale We Had A Girl Before You.

Subscriptions to the three-production 2021-2022 live season are available at northernlightthteatre.com (single tickets on sale in October). Following the live run of the opener The Great Whorehouse Fire of 1921, a digital streaming version will be available for screening. And in the changing COVID-ian landscape other streaming options for the season are possible. Says Schmidt “I’m ready to pivot at any point.”