At a moment in history when so many of our artistic assumptions are ready for their close-up, the intertwined questions of how theatre gets made, how it’s experienced — and by whom — are up for hard scrutiny in the late-pandemic lighting.

There’s an academic way to talk about the future of theatre practices, and creation with a wider cultural, racial, and ethnic embrace. And then there’s the live, physical way to envision it. Postmarginal Edmonton, the project happening Sunday through Tuesday on location at the Fringe’s Westbury Theatre, is the second.

There were Postmarginals in Montreal in 2018 and Vancouver in 2019. An unusual collaboration has made possible the Edmonton edition of the event: Walterdale, our community theatre; the Citadel, our largest professional theatre; Theatre Alberta, the umbrella organization that promotes theatre development and growth here. Postmarginal Edmonton gathers 50 local theatre artists, storytellers, and cultural workers, of every stripe — for dialogues, workshops, and collaborative cross-cultural experiments about identity and the ways in which our differences can be a source of inspiration. It’s a sort of artists’ retreat, yes, but retreat is probably the wrong word. Postmarginal is tuned to advance — in diverse representation and engagement, in the rehearsal hall and onstage, .

We caught up this week with project director Peter Farbridge, the  actor/director/filmmaker  — and co-founder (with Soheil Parsa) of the Toronto company Modern Times Stage Company where the seeds of Postmarginal were planted. “There was an inter-cultural basis to the company right away,” he says from his home base in Montreal. “Soheil came as a political refugee from Iran…. We met at university, we liked each other’s work, we decided to start a company.”

It was 1989, and Toronto, the most multi-cultural city in the country these days, was experiencing an immigration boom. “But there wasn’t a lot of inclusivity in theatres at the time,” says Farbridge, who appears in many of Modern Times’ productions. “We weren’t being political … but our company stood out” with its diverse repertoire (some Iranian some Western, much new) and its roster of artists. “Soheil wanted to see the entirety of of the artists onstage — their culture, their training, their personalities.”

Postmarginal, he says, was inspired by the practices of Modern Times. “We wanted to share,” he says. “We thought maybe we could bring something to the (theatre) community that could be replicated, or inspire other kinds of inclusion,” the LGBTQ community for example, or the physical or mental disability community. “The opening of the space to voices and perspectives could be quite radically inclusive.” Postmarginal was born in that thought.

Postmarginal, which started with a 2017 Montreal conference, was never going to happen as an instruction pamphlet or a university course. “We need the engagement of the body in the space,” as Farbridge puts it. “As theatre artists we need to think corporeally as well (as intellectually)… to have the conversation in a way that’s fully engaged in the space.” And that visceral experience of “watching it happen in a space with artist practitioners” is crucial, he thinks, for listening, and for “opening up pathways towards empathy.” Hence the idea of the retreat.

Jesse Del Fierro leads the Postmarginal workshop “What are you afraid of…?”

Jesse Del Fierro (they/them/), Theatre Alberta’s outreach and partnership coordinator, was a storyteller participant in Postmarginal Vancouver in 2019. They remember being particularly struck by the conversations the event engendered. They now head the 35//50 Initiative by which professional theatres (and Theatre Alberta) have committed to achieving 35 per cent BIPOC and 50 per cent female-identifying and non-binary representation in staff and contractors by 2025. It’s more “structural” in its approach to change than Postmarginal, which asks “once everybody is in the room, how are we speaking to each other?” as Farbridge says. But the two projects are on parallel courses. 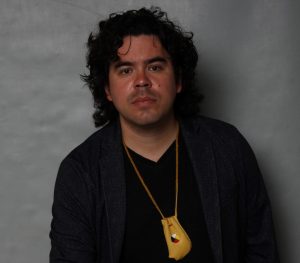 The “entry point” for Postmarginal is storytelling, he says. “It’s a way to gain access to different worlds….” In addition to the Postmarginal team, the roster of facilitators and workshop leaders for the Edmonton edition (a year and a half in the making) includes some of our most most distinctive and gifted storytellers (Josh Languedoc, Mūkonzi wa Mūsyoki, Chris Dodd, Lady Vanessa and Todd Houseman among them). Storytelling “gives the participants the opportunity to (put) different perspectives together; what are the commonalities? what are the differences?”

The third of the three Postmarginal days leans to facilitating artistic partnerships for theatrical projects yet to come. The full impact of the pandemic, when the performing arts were abruptly put on hold, has yet to be understood. “How different can our work spaces be as theatre comes back in full force?” Farbridge is heartened, he says, by the interest in change from the big, major theatres.

As Del Fierro muses, “how that relates to the audience, we’ll have to see….” Was the pandemic merely an intermission in a long-running theatre production? Postmarginal is all about testing the proposition that diversity and inclusivity onstage attract a more diverse and inclusive audience. “It does work,” Farbridge says of the Modern Times experience. “It is possible to enter into theatre, to be seen, to be heard,” in short to break the colonial stronghold.

Eric Rice of Walterdale points out that the Postmarginal partnership has already had on impact on that community theatre; conversations around diversity-equity-inclusivity are now a regular part of season planning. Stay tuned.