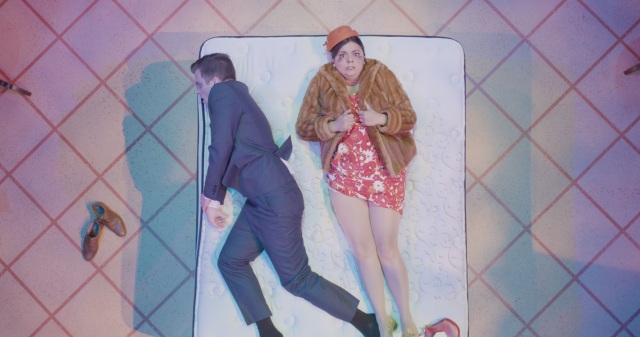 “It’s what I do! It’s what I love!” declares a man in earnest defence of the job that is his chosen career and his avocation.

Mike Brack (Mathew Hulshof) is an expert in the field of mattresses. He is a bed salesman in a department store, the old-school kind with sales persons, and “attention, shoppers!” announcements.

In Stewart Lemoine’s A Fit, Happy Life, the third of the three filmed productions in Teatro La Quindicina’s 2021 summer season — all three are now available online — Mike shares his specialized knowledge with an impromptu series of challenging customers (all played by Kristen Padayas), in an effort to fulfil their individual mattress requirements.

As Mike notes to a variety of shoppers, there are “485 individually pocketed coils” in the extra-firm deluxe queen-size mattress made especially for Abernathy’s by Royal Serenity, and designed by a team of orthopaedic doctors for “a good night’s rest and a fit, happy life.”

In the world of department store sales, you do feel that it’s one thing to be selling air fryers in the small appliance department or ear muffs in accessories. Alighting (so to speak) on the right mattress for a particular customer, however, involves an unusual degree of personal connection, empathy with the individual priorities and relationships of strangers. Although a domestic staple, the bed is also a universal symbol, and a veritable double-entendre on coils. Can any non-stick omelette pan claim so much?

Mike’s professional reserve and affability, confidence, and on-the-job equilibrium are challenged at every turn by the particular demands and revelations he confronts. And the performance by Hulshof, such a smart, alert actor, captures that sense of a man adapting on his feet. A bed salesman cannot seem to be taken aback; he certainly must not be shockable. Mike is the man who learns too much about every stranger he meets, as one does when one is selling a stranger a mattress.

How this builds to a heartfelt ode to retail is something you’ll have to discover for yourself. The soundtrack of Mike’s professional life even includes a chorus: “Attention shoppers! Your clock specials have expired.”

Co-directed by the playwright and Belinda Cornish, A Fit, Happy Life, is based on a 1985 Lemoine (Women In Bed) that ran for three performance, late night at the old Phoenix Downtown. In the original, the customers were played by a succession of actors. Taking advantage of the filmed medium, Padayas turns in a zestful comic performance playing all of them. They’re a wild all-age assortment of aggrieved wives, nouveau-riche brides, mysterious sirens who say things like “my curiosity waxes and wanes,” and others.…

Padayas is resourceful and very funny, entering Abernathy’s bed department (designed by Cornish) as a succession of completely different women. Ah, the magic of film. I can’t say more; surprise is of the essence. But I can tell you the costumes, wigs, and make-up by Rachel Bowron are a riot.

Like Lost Lemoine Part 1 and Lost Lemoine 2: A Second Round of Seconds, A Fit, Happy Life is available for streaming, through Oct. 31 at teatroq.com. The fourth production of this highly compressed season, Fever-Land, happens live and in-person. It opens Sept. 24 at the Varscona Theatre.