Makings of a Voice, Dana Wylie’s story about storytelling is back to live, at the Arden 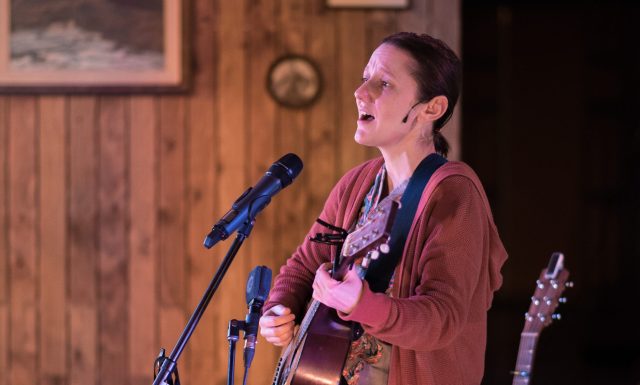 When Dana Wylie returned to the world of theatre last March from a decade as a singer-songwriter, she came bearing a story about  storytelling.

Makings of a Voice, the feature production of the 2021 SkirtsAfire Festival, was all about the heroic family backstory she thought she’d inherited, then had to jettison — and the more personal story she found in a journey of self-discovery.

Vanessa Sabourin’s production adapted to the pandemic realities with a film version shot in the empty Army & Navy store in Strathcona, a dark and mysterious echo chamber of a space. Striking though that film experience was, Wylie’s “theatrical song cycle” comes more fully into its own, in the medium for which it was originally created, when she arrives, live, on the Arden Theatre stage Oct. 16.

Makings of a Voice will have a live, in-person audience. And, crucially, it’ll have a live three-member onstage band. “What it means for me, not to have to carry the whole show by myself, is huge!” declares Wylie happily of her three onstage companions (Kirsten Elliott on flute, cellist Christine Hanson, and guitarist Billie Zizi). “That support for the dramatic elements, in underscoring, and also (stage) business…. I’m in the middle of a monologue, with everything going on but I have to somehow get my guitar. Or when other people can start the song and I can keep talking….”

“I can do the songs by myself of course. But something magical happens when I have another person onstage with me. That onstage interaction adds so much for me…. There’s always something new, something I didn’t expect to hear. It’s an acknowledgment that music only exists in that moment. It’s never the same thing twice.”

And, for Wylie, who loves telling stories even in musical gigs, there’s the eye contact with the people in the house seats. “All the monologues are there; the stories are there,” she says. The change in going live is in “how I address the audience, where they are in space with me, and where I am with them. And how I want that to work.”

Makings of a Voice eludes all the usual theatrical classifications. It’s not really a play, though it has characters (including a protagonist named Dana) and a dramatic arc. You wouldn’t really call it a musical revue or a cabaret either, though it’s full of Wylie’s original songs. It has a more dramatic shape (and a lot more music) than a memoir.

The impetus, as Wylie has said, was the impending birth of her second child in 2019. She felt urgently need of a family story, to locate herself in an inter-generational maternal lineage. And she was sure she’d found one, by chance, in an anecdote about her feisty great grandmother Millie, who’d marched in the Winnipeg General Strike of 1919.

It fell through, for reasons you’ll discover in the show. And the setback is part of the story Wylie tells in the show, too, of a struggle to find another, one closer to home with a quieter kind of shared heroism about it.

The show, she thinks, lives in the “fluid space” between the immediacy of telling a story to people — “I’m here and we’re not pretending you’re not there” — and a more dramatic space in which she conjures the past. “It rides between these two worlds.”

“The Dana of the present of the show is on a journey to figure all this stuff out … trying to find connection, trying to find her story,” says Wylie. “And that takes me into moments in the past that become more dramatically immersive.”

Like many musicians, Wylie spent the second pandemic summer doing outdoor gigs, for small gatherings on front porches and yards, some as part of the Folk Fest initiative in taking music to the people on location. The Arden, a 500-seater, is a return to a big theatrical space. It’s a challenge for intimate storytelling, she says. But “the space really comes into its own in the theatrical parts of the show…. There’s a thing about being on a big stage, with lights in your face, that makes you want to be larger than life.”

And, though, the pandemic hasn’t inspired a raft of new Wylie songs, she says, she’s set herself a creative task. “I started a Patreon (campaign). And once a month I’m choosing a poem to set to music.” She’s ranged widely, starting with Aphra Behn, the 17th century English playwright, Mary Oliver, and most recently an English translation (by her boyfriend) of a Pedro Rocha poem. Shakespeare might be next.

Makings of a Voice is live, and in a theatre. “And I love working on the show with Vanessa, working the actor muscle I still have,” says Wylie, who trained in musical theatre at MacEwan long before getting a degree in musicology at the U of A. But it doesn’t represent a drift back to a life as an actor in the theatre world, she insists. “Every five years!”

“I guess I’m not really an actor; that’s not really what I do best…. A story about storytelling: to do something like this is perfect for me.”

Check out the 12thnight interview with Dana Wylie last March here. And a 12thnight review of the online show here.

Makings of a Voice

Co-presented by:  SkirtsAfire Festival and the Arden Theatre

Created by and starring: Dana Wylie