The comedy of excavation: Hiraeth at the Varscona in a Bright Young Things production. A review. 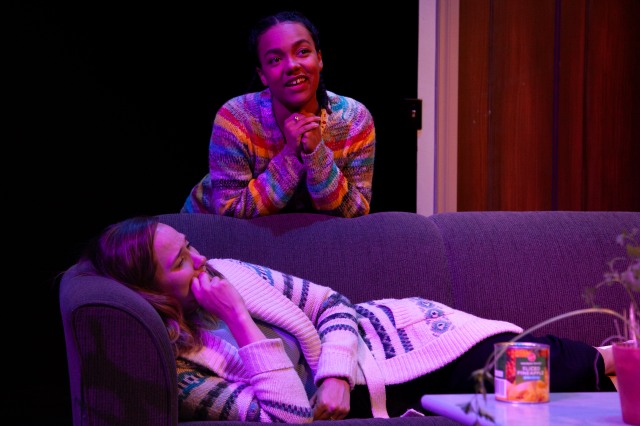 In a visceral way, there’s nothing more gut-wrenching than hope. It puts your dreams into a never-ending spin cycle. You can’t get a grip on grief, or heartbreak. You can’t even grab onto sadness properly, much less arrive at a catharsis.

There’s a new comedy about this. Belinda Cornish’s Hiraeth, which gets its name from an elusive, untranslatable Welsh word — “the longing for a home you never had, or to which you can never return” — is premiering at the Varscona in a Bright Young Things production. The two-hander is the latest from the prodigiously multi-talented actor/playwright Belinda Cornish, whose full-bodied comedy The Garneau Block, after many pandemical delays, has recently finished its premiere run at the Citadel. The director of both plays is Rachel Peake, on loan from the Vancouver Arts Club.

The theatre repertoire is full of aspirational pep-talk dreamer comedies and their conceptual opposite, the slacker fixer-upper comedy. Hiraeth isn’t like either. There’s also an ample complement of odd-couple comedies, where the utterly mismatched learn something about getting along, and there’s a comic resolution. With its two characters, in close quarters, who couldn’t be more different, Hiraeth tilts unexpectedly toward that, but in ways that will intrigue and surprise you.

The crux of the matter is in vitro fertilization (IVF). It’s a subject that’s a lot edgier in odd-couple comedy than discovering, say, that a flamenco troupe has moved in upstairs, and your building has hardwood. Which goes to show how elastic “comedy” can be.

One of its two characters, Sidi (Kristi Hansen), is an accomplished, 40-ish woman who works at home, an environmental economy consultant with her own business. She has an absentee husband, some sort of outdoor guide who seems to be successful, too. “Go show tourists the wonders of the wilderness!” she says affectionately in one of the series of phone calls which constitute his presence in Sidi’s daily life, and the play. 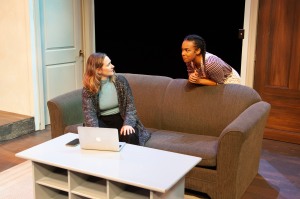 Which brings us to the matter of the baby. Sidi doesn’t have one, but she’s trying. She’s in the midst of a third round of complicated IVF treatments, appointments, blood work. Her life is work phone calls interspersed with calls from the doctor’s office, with news that’s a matter of three-day waits, probabilities and percentages, temporary jubilation, tempered follow-ups, sucked-up disappointments.

Her fingers are permanently crossed, so to speak. Sidi, as Hansen’s performance conveys so unerringly, is absolutely functional at landing “tier 3 contracts” but emotionally harried, perpetually hopeful on the brink of conception.

And it’s on that edge that it happens: thunderous sound effects from the basement. Then a mysteriously kooky young woman bursts into Sidi’s kitchen, announcing she’s moved in. 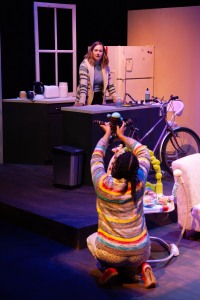 Bean (Rochelle Laplante), whose profession at the moment is making sock monkeys, immediately starts rummaging through the kitchen drawers — “wow, are you, like apocalypse-hoarding?” — and “borrowing” stuff from Sidi’s fridge. No one has ever arrived in adulthood without enduring a neighbour or roommate who plays music you hate really really loud. And Daniela Fernandez has the fun of making her sound designer debut with a score that includes a barrage of sound effects, echoing flushing, party-hearty thumping, undefinable noise, and high-volume Duran Duran.

Bean is everything Sidi is not. She’s in her 20s, for one thing. She’s impulsive, scattered, invasive, cavalier about other people’s personal privacy (and their food supply). Her non-stop free-associative chatter, which seems to unerringly press on Sidi’s bruises about conceiving a baby (“what if your baby had a heart defect … it’s more likely since you’re old”) is a volley of contradictory sound bytes and bubbles.

Doors, much less the concept of knocking first, mean nothing to Bean, in an oddly sparse house designed by Madi Blondai to seem not quite lived in. “It’s like no one even lives here!”, Bean declares. And that has a stabbing truth to it: Sidi has never really moved in; she lives on the phone.

Laplante, so impressive in last summer’s Freewill Shakespeare Festival production of a three-actor Macbeth, has a great speaking voice. She captures the maddening youthful charisma and good cheer of a character who takes charge of both tone and space.

And gradually, Sidi, who’s appalled at first with this infuriating neighbour, finds herself confessing to private medical details, then the heartache and frustration of trying to conceive. And in the pinball machine of Bean’s roll-out of observations about feral camels in Australia or “a massive societal breakdown” or plans to be a tree surgeon “or maybe a chef,” little insights do randomly land, hard. Life, Beans notes in passing, “isn’t fair or kind.” And the “silver wheel” just rolls ahead.

Peake’s production charts the odd topsy-turvy growth of a relationship that starts in comic irritation. In Hansen’s intelligent and moving performance, we can actually feel layers of reserve — carefully and hopefully constructed — getting gradually peeled off formidable emotional fortifications. Change is painful and it’s slow work.

The secret of the ending, and the part Bean plays in it, is safe with me. But I can tell you this: Hiraeth is a dimensional comedy, an excavation of sorts: it’s funny on the surface, and underneath it’s not. And it’s got two fine performances to take you there.