The (88) keys to the kingdom: Darrin Hagen’s solo show Metronome. A review

In his new solo play Metronome, Darrin Hagen sits at a table under a giant arc, a rainbow of piano fragments, strings, unstrung sounding plates, keyboards. At one end, attached to the ground like the mythical pot of gold, is an accordion. The other end is free-floating.

What an apt and witty metaphor (designer: Beyata Hackborn) for a memoir in which Hagen traces his multi-hued story back through the years — and a queen’s ransom in sequins — to a life-changing discovery by a gay trailer park kid in a small prairie town.

We know Hagen as a playwright and performer, an author, a queer history documentarian and activist, one of this theatre town’s busiest sound designers and composers. We’ve seen his glamorous alter-ego as a drag queen, in four-inch stilettos or a mermaid’s tail.

But where did he come from, this mysteriously expandable multi-branched talent? Was he planted in the hard soil of Rocky Mountain House? Assembled from parts? Found fully formed? Self-created? Stick around. That’s what Metronome, getting its premiere in Heather Inglis’s Workshop West Playwrights Theatre production, is for.

The First Cause in this origin story is music. And the key (well, the 88 keys) to the kingdom? The piano. “Something about piano keys has always pulled me in. I’m literally unable to resist,” he tells us near the outset.

Maybe that’s why — in a counter-intuitive choice — there isn’t a real live piano onstage in Heather Inglis’s artful production. Maybe he wouldn’t be able to leave it alone.

Instead, there are musical memories assembled from the air by Jason Kodie’s score, a vivid capture of time and place. For Hagen, memory is built and archived from music. And the circular floor on which Hagen revolves to tell his story is dappled with pages of music, notes, the ticking of the metronome. Adam Turnbull’s lighting and Ian Jackson’s video design, both striking, create a sort of magical memory world for Hagen to play in.

For Hagen at age seven, music was a language he urgently had to “figure out with my ear.” He describes tinkering away on his Grandma’s chord organ until it “made sense.” In the face of such full-hearted persistence what could a resistant keyboard do? An hour later,  completely untrained, he could play On Top Of Old Smokey. 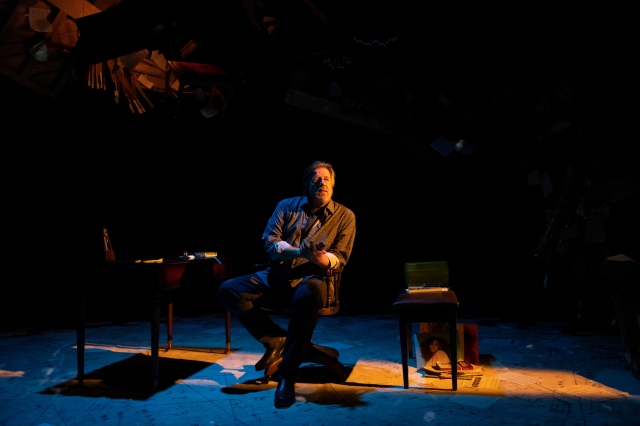 “Every song, he says at the beginning and end of Metronome, “is a memory.” And the musical memory bank begins with a used starter accordion (“cheap accordions are everywhere on the prairies,” Hagen tells us). Then, with a series of ever-bigger and more adult accordions, progress came so fast that in three years he’d outgrown the skills of his teacher Mrs. Bonde.

In a pungent little add-on (which seems to be the way Hagen’s storyteller wit rolls), he remembers playing The Entertainer (from The Sting) at a school assembly, and his reward afterward. “On the school bus on the way home, one of the dickheads called me a faggot … for being good at something.’

It was time for a piano, and none too soon since “I was beginning to realize the accordion was the Kiss of Nerd Death. I blame Lawrence Welk. And Gaby Haas. And The Emeralds.” And through the efforts of his mom and dad, a used Ennis & Sons upright grand was acquired for 700 bucks from an old lady in Sylvan Lake, and hauled into the trailer.

What emerges in the course of Metronome is the story of a special  talent, and the way it got noticed almost by accident in unlikely circumstances, and nurtured against the odds. Music unlocked a rainbow of creative possibilities for a gay kid otherwise consigned to the solitary closet of small-town bullying and low expectations.

Hagen’s piano, as he tells us, was his inspiration, his source of friends, his talisman against a brute and brutalizing world. It gave him applause, family rapport, and jobs, as he recounts in amusing anecdotes. At 12, he was already a piano teacher. He played weddings, old folks’ homes, trade fairs, community halls. His stories about competing in music festivals and taking Royal Conservatory exams are wincing and funny.

Soon he’d move to the big city and have the creative confidence to reinvent himself in a crazy new showbiz life. That chapter is a story Hagen has told elsewhere, in his volume (and play) The Edmonton Queen. And it’s not the focus here, except that his precious piano provides a springboard, enters that world, and moves around in it.

Hagen is a great raconteur, with an instinct for gathering wry, telling details, and an aversion to self-pity. And gradually what emerges from his stage memoir is a vivid double-portrait of small-town trailer park life, in which he was both the pride and joy of his un-artistic family and the odd-kid out in town. It’s Hagen as a sort of Rocky Mountain House Wingfield … if Walt Wingfield loved Donna Summer, stayed up way too late, and dropped acid. His account of the Battle of the Bands on Rocky’s main street is worth the price of admission.

The challenge of a solo show is to make the written come alive as verbal storytelling to an audience. On opening night at least, the performance took a little time to overcome that hurdle, to slow down and breathe, find a rhythm of spontaneous pauses, afterthoughts, annotations that could take the show away from the writer and give it more fully to the actor.

It did happen, though. And with it, Hagen is finally able to step a little away from his time-travelling journey, and tell us more directly of his debt to a moment 50 years ago, “the day music became my life.”

It’s Hagen’s poetic coda to a lively first-hand account of how art can be a life-changer. He himself, actor and playwright, is the tangible proof. It feels earned, and it’s moving.

Check out 12thnight’s conversation with the playwright/star in this preview.

Written and performed by: Darrin Hagen