Holding the torch in a man’s world: The Great Whorehouse Fire of 1921 at Northern Light Theatre. A review

History is the springboard for The Great Whorehouse Fire of 1921, the cunningly knotted little play that opens the Northern Light Theatre season in Trevor Schmidt’s crackling production.

The title reveals the small-town crime, recorded by the local paper and apparently never even investigated much less pursued to justice. What unfolds onstage, scene by scene, is playwright Linda Wood Edwards’s hypothesis about what happened in Big Valley, Alberta just after Christmas that year.

There’s no shortage in the  theatre archive of two-handers that throw together mismatched, utterly incompatible characters. Nun and showgirl, red-lipped drag queen and purse-lipped accountant, oligarch and bum, criminal and cop, woman and misogynist … in stuck elevators, sealed bunkers, locked cellars, rent-controlled apartments…. Then we watch as the odd-couple hostility gets de-thorned, and turns into grudging accommodation, understanding, maybe even appreciation.

In its set-up at least The Great Whorehouse Fire of 1921, originally developed as a Fringe production by the indie company MAA and PAA Theatre, is an heir to that venerable tradition. Wood Edwards imagines a series of encounters in a small mining town in the Alberta hinterland between Mrs. Hastings (Sue Huff) the local brothel madam and Mrs. Smith (Twilla MacLeod), the upright proprietor of the local boarding house. And the play is woven with monologues in which the characters speak directly to us.

At the outset, when we learn of the mysterious conflagration that has razed the brothel to the ground, the characters stand on either side of a sensibility abyss. The bold, earthy worldliness of the former and the corseted Victorian moral disapproval of the latter are set forth vividly in performances from Huff and MacLeod, costumed with high-style pizzaz by designer Alison Yanota and make-up artist Kendra Humphrey.

As Mrs. Hastings, Huff has a breezy, off-the-cuff bravado about her. Her sass doesn’t abandon her even in moments of duress in a hard life. In the first scene, as she recounts the night in which she fled her burning house “and walked into a town that burned us out,” she cites a Robert W. Service poem.

MacLeod as Mrs. Smith looks properly horrified when the fire refugee hopes for a drop of something quite a bit stronger than the tea she’s offered. She’s constantly taken aback by the pragmatism and anti-sentimentality of her counterpart. But her attachment to respectability is, as she is moved to realize, is a kind of social pragmatism, too.

Her worldly “recipe” for getting along in a small town (“a cup of drivel, teaspoon of flattery, a pinch of venom…”) is a rare jarring moment when the playwright’s gift for natural dialogue gives way to a more authorial, imposed sort of voice. What? Suddenly Mrs. Smith is the northern Alberta Lady Bracknell? But MacLeod’s performance smartly negotiates the thawing of the moral permafrost that the character knows at some level keeps all ambiguities frozen in place.

The play unspools in reverse, with alternating flashbacks. Against a backdrop of birthing cries on an Easter weekend in Mrs. Smith’s boarding house (sound by Mason Snelgrove), it transpires that the two women are, in a curious way, connected by business. The one runs a brothel with a core clientele of single miners; the other runs a boarding house that is a refuge for the brothel employees, who regularly get knocked up in their line of work.

Mrs. Smith muses that the birth of “the child of a whore” is a blasphemous way to usher in Easter. For her part Mrs. Hastings concedes that the birth may be indeed touching: “it touches me like a bullet to the brain.” 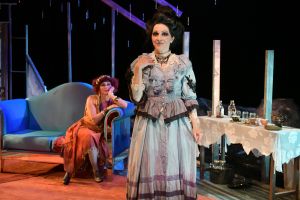 Their back stories are revealed by the characters themselves, as they simply step outside the wooden frame dwelling, beautifully lighted, that is the centrepiece of Yanota’s striking design in Schmidt’s production. And in their encounters, increasingly casual and confessional as Mrs. Smith and Mrs. Hastings become “friends,” they confirm in their individual ways that the relationships of women to men are nuanced, and crucial to survival in the age in which they live.

Mrs. Hasting’s argument that marriage merely delays the pay-off — “why wait to inherit one man’s money when I can get most men’s money right now?” — has the Shavian ring of Mrs. Warren’s Profession and its thought that Victorian marriage is legalized prostitution. Mrs. Smith is less and less inclined to disagree, and under the tutelage of her friend, develops a work-around.

There is a starchy wit to Wood Edwards’s writing. Each scene has its own surprises to offer. One woman has lost a child; the other hasn’t been able to conceive. “God didn’t give me my own children. But he left me the playpen,” says Mrs. Hastings brightly.

Soon they will be trading Christmas puddings and mustard pickles, as well as gossip about a town that runs on that subterranean nastiness. And there’s a further point at which negotiation gets trickier, more delicate. The miners, single and foreign, are the mainstay of Mrs. Hasting’s business. But isn’t it curious that the men of the town, the husbands, seem to be bathing more frequently?

How this will be resolved is unexpected, and fun to follow. And what is surprising, too, is what will not be resolved. The Great Whorehouse Fire of 1921 is tough-minded about the way women’s friendships develop in a society where men have the upper hand — and the way they are undermined and betrayed.

The Great Whorehouse Fire of 1921

Tickets (must be purchased in advance) and vaccination/ masking protocols: northernlighttheatre.com.