A mysterious encounter en route to the Promised Land: The Mountaintop opens the Shadow season. A review 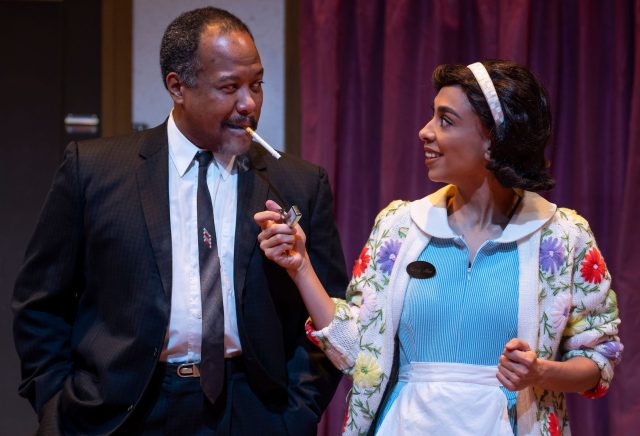 “Why America is going to hell … ” repeats the man before us, testing different ways of rolling off each syllable for a speech-in-progress.

It’s a sonorous voice gone scratchy around the edges by hard use (and Pall Malls). A road-weary Martin Luther King (Ray Strachan) is just back from delivering his celebrated I’ve Been To The Mountaintop speech at the Mason Temple in support of striking sanitation workers.

He’s in a depressingly dingy Memphis motel room (designer: Even Gilchrist, who evidently knows bleak beige lino when he sees it) on a stormy night, checking for hidden microphones, trying to phone his wife. And, as the recipient of innumerable death threats, King jumps at every crack of thunder as he waits for his colleague Rev. Ralph Abernathy to return with cigarettes.

We’re backstage in the life of a hero, where the mundane and not the momentous rules. But everything about it seems portentous, not anti-climactic. It’s April 3, 1968, King’s last night on earth, imagined by American writer Katori Hall in her 2009 play The Mountaintop. The Shadow production directed by Patricia Darbasie at the Varscona is the theatre’s first live show in two years, and launches a three-show season.

The next day, April 4, will bring a terrible, defining moment in American history and the violent story of the civil rights movement. King will be assassinated on the balcony of the Lorraine Motel. Meanwhile, the play sets forth an encounter that reveals the human dimensions of a larger-than-life hero. 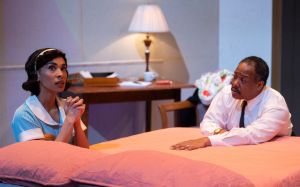 A motel housekeeper arrives at the door of room 306 on her first night on the job, bearing coffee and, as it turns out, a surprising identity. Camae (Patricia Cerra) is sassy and flirtatious, mysteriously feisty, knowing, and skeptical as she engages with the great man on subjects like protests, heroism, America’s defaults in living up to its professed sense of self. “Tomorrow,” she says looking at the date on the late-edition newspaper she’s been assigned to bring him, “is already here.”

The performances in Darbasie’s production are compelling and vivid. Strachan has the tricky assignment of capturing both the grandeur of King the star performer whose cadences are an indelible part of our collective history, and the self-doubt and vanity of the lonely, human-sized man who lies to his wife and has holes in his socks. And he does; he inhabits a portrait that is, in that sense, sculptural.

There’s an escalating strangeness about Camae. Cerra shines brightly as a mystery character with an unexpected confidence about her, an enigmatically intense stare, pauses that have their own incantatory quality too. I can’t tell you more about Camae without spoiling your own discovery, but Cerra is terrific.

As captured by Darbasie’s production, the rhythms of the encounter, are disconcerting, always surprising till they’re not. A play that spends a lot of time (possibly too much time since it feels long) being play-ful, The Mountaintop starts in the valley — the ultra-realism of that cheap motel, the flirtatious maid, the tired man with the smelly feet, the wandering eye, and the cough — and climbs to something else. Magic realism takes us out of the play’s present and into a vision of the future. The video and the ominous sound design by Dave Clarke have a kind of suspense and tension to them that the play itself, which has its cumbersome moments, can’t quite sustain on the ascent.