A home of their own, in the entertainment ‘hood: Rapid Fire Theatre at 41 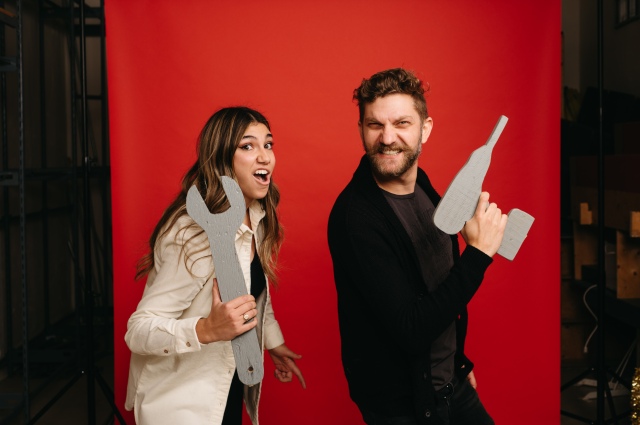 They’ve dreamed it for years. Now, at age 41, Rapid Fire Theatre finally has a home of their own. And it’s in the ‘hood that’s their  traditional home base, Old Strathcona.

Edmonton’s premier improv company is moving into the Strathcona Exchange Building, the historic old telephone exchange-turned-phone museum on 83rd Ave. you know from summers of Fringe shows. Which means that RFT will be throwing down the welcome mat in the heart of the city’s liveliest entertainment district, less than a block from the Varscona, where audiences queued for their late-night improv shows for more than two decades.

The building — now owned by Telus and sitting empty (save for Fringe shows in August) since the early 2000’s — dates back more than a century to the era when Strathcona merged with the City of Edmonton. It’s a fixer-upper, to say the least, as RFT artistic director Matt Schuurman explains. And the home improvements have already started. “We just finished the demolition of the interior last week. And its looks far different, much bigger…. The potential is so exciting!”

In January, Rapid Fire exited downtown where they’d spent eight seasons in the Citadel’s Zeidler Hall, and crossed the river. Since then their programming has been happening in the Roxy on Gateway, the black box theatre that’s been home to Catalyst Theatre and, for six years as their 124th re-build progressed, Theatre Network. And that’s where you’ll find RFT shows till their new theatre is ready: “no hard date yet, but maybe as early as the fall of this year,” says Schuurman. “A lot of things can put that back,” including supply chain issues. 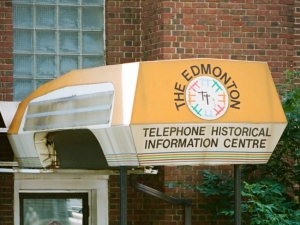 Group2 the architecture/interior design firm in charge of Theatre Network’s new Roxy, is creating the design. Though details remain to be finalized, the budget for the custom re-fit is “ball-park $3 million.” What Schuurman and his improviser cohorts have in mind is that rarest of showbiz venues: a theatre designed specifically for improv. “In all the different spaces we’ve worked in, what we kept coming back to was this: a level of intimacy with the audience,” he says. “Not a hard separation with an audience quietly sitting in the dark watching a show…. We’re performance that bleeds into the audience, that’s constantly engaged with the audience, performers constantly moving into the house and the audience coming on to the stage. Exchange!”

“Side note,” says Schuurman, happily, “I love that the building is called the Strathcona Exchange. It’s perfect!”

The main house upstairs will have a capacity of about 160 or 170, “our magic number,” Schuurman says. “Anything over 200 is unwieldy … since the audience is part of the show. The set-up is proscenium but with a curved stage — a mix between a proscenium, and a thrust stage. The audience is curved around the stage, so people on the ends can see each other and share the experience.”

Enhancing the exchange principle is a stage that’s very low, “only six inches off the ground, a single step on and off the stage,” says Schuurman. In the basement there will be a second smaller space, capacity under 100, a black box useful as a rehearsal and practice studio and RFT’s busy, expandable roster of public workshops and classes. Before the pandemic that schedule amounted to three or four days a week, he says. “During festival season, for Improvaganza (RFT’s international improv/ comedy fest) and the Fringe, it’ll be a secondary performance space.”

And “for the first time ever, we’ll have offices, a work place for our entire staff (numbering around 10, mostly part-time except for Schuurman and general manager Sarah Huffman), to be in the same building, together.”

Huffman started her general manager gig a year ago, just about the time the lease with Telus was secured. “This’ll be a big project,” Schuurman told her at the time. “And, cool story, it turns out her grandfather worked in (creating) the phone museum!” 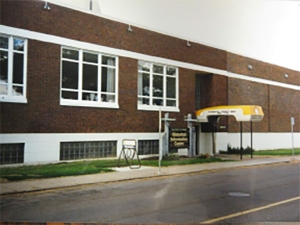 In this town improv is a growth industry. And Rapid Fire has outgrown its series of venues, the Varscona and the Citadel’s Zeidler included. With a building of their own, and a prime location, the theatre company can grow again. “Our location in the neighbourhood opens up new opportunities,”  Schuurman points out. Proximity to the Farmer’s Market has inspired plans for kids’ matinees on Saturdays, for example.

He imagines RFT’s dozen-year-old schedule of outreach programs, taken to youth at such organizations as the Amiskwaciy Academy and the Boyle Street Education Centre, happening in the new space. And RFT’s roster of corporate clients can be hosted, too, for team-building workshops and the like. Here’s the pitch: “Take an improv workshop in our theatre on a Friday afternoon , have dinner somewhere on Whyte, come and see a show at the end of the night.”

“I haven’t counted the steps out,” says Schuurman. “But I think we might actually be closer to the Next Act (the showbiz bar and bistro) than we were at the Varscona.” Yes, back home where they belong.