Ten years of SkirtsAfire: amplifying the voices of women and non-binary artists

It’s been a decade, amazingly, since Annette Loiselle and a couple of her actor friends, Sharla Matkin and Nadien Chu, sat at the Carrot Cafe, plotting over popcorn, red wine, and lopsided statistics.

For years Loiselle, a veteran actor and co-founder of the Freewill Shakespeare Festival, had been “looking around me in the arts community,” as she says, and “seeing, there in plain sight, how women didn’t have as many opportunities in the theatre profession as men.” It was not a sight for sore eyes.

“It was systemic. Mostly men were running the theatre companies. Mostly the plays being produced were written by men. And that (imbalance) trickled down to performers…. The statistics blew me away, how bad it actually was.”

“Well, what can we do? Our original instinct was let’s start a theatre company!’” says Loiselle of an idea that’s always found fertile ground in this theatre town. “Let’s do all women’s plays and hire all women as performers, directors, writers, designers!” There already was an indie company built on that model, though, and they didn’t want to compete with The Maggie Tree.

“That’s when we started thinking festival. And multi-disciplinary…. We discovered women weren’t just under-represented in theatre but in all the arts,” says Loiselle. SkirtsAfire was born in that thought. And the annual celebration of women and non-binary artists has expanded in length, in artistic vision, in audience outreach, in cultural impact ever since — one of Edmonton arts’ bona fide success stories. “I was a bit intimidated,” says the SkirtsAfire artistic director, who has a very appealing resistance to rhetorical grandeur. “I understood theatre, and I understood music a bit. But visual arts? Spoken word? A whole new world for me.”

The debut SkirtsAfire of 2013 was small — but not that small. Among other ventures in programming it presented a fusion production, Piece By Piece, “not so much a play but a song cycle” created by and starring popular Edmonton singer-songwriter Maria Dunn. It chronicled the history of the women at the GWG factory, and their fight for rights. “Maria created a video and projections; she sang songs and told stories…. And because she had such a following, we had some audience (600) that year,” says Loiselle.

A festival that started as a pencil mini-skirt, so to speak, has volumized into something big, gathered, elasticized, mid-calf to floor-length. The four-day celebration in 2013, with its 70 artist participants, has grown steadily —  into an influential 10-day festival, with multiple locations and curators, a full theatrical production centrepiece, and (even in the tortuous pandemical vagaries of the last two years) an audience of 2,000. 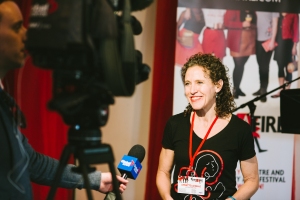 “In 10 years a lot has happened and changed in theatre,” muses Loiselle, “and we’ve gone down that road too. The climate has improved for sure. It’s started, but we still have a long way to go.… in gender and cultural diversity.” Now, she thinks, “it’s less about uplifting the voices of women and more about uplifting the voices of under-represented communities. Which includes women!”

“It’s not like we don’t hire men. We do. But our goal is that the people driving the work are women or non-binary people.”

SkirtsAfire may be multi-disciplinary. But these days theatre is still “at the forefront of the festival,” as Loiselle puts it. Some years, the festival presents; some years it produces. In 2020, for example, on the brink of the pandemic, SkirtsAfire premiered Michele Vance Hehir’s The Blue Hour. Several firsts are attached to that atmospheric play, the third of the playwright’s Roseglen trilogy set in a small fictional prairie town.

One was that “it was our first year in a proper theatre” (the Westbury) after years of strenuous SkirtsAfire labours building a theatre from scratch annually in the Alberta Avenue Community League. “A big move forward!” says Loiselle. Another was that it was Loiselle’s own directing debut, a handsome large-scale production designed by Megan Koshka and lighted by T. Erin Gruber. 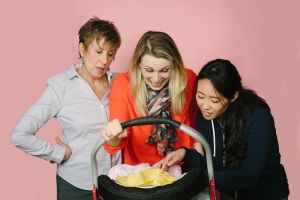 The festival has showcased the work of other experienced playwrights, Nicole Moeller (The Mothers) and Trina Davies (The Romeo Initiative) among them. And the development of new plays (and new playwrights) is a SkirtsAfire goal. The centrepiece of the 2017 edition, The Mommy Monologues, was a collection of original vignettes by 11 playwrights and one singer-songwriter. In 2018 SkirtsAfire launched the “Peep Shows,” staged readings (curated by dramaturge Tracy Carroll) of plays-in-progress the festival hopes to produce in the future. 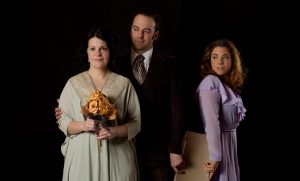 A decade of slowly acquiring profile, grants, and an audience has arrived — despite the grinding exigencies of the pandemic — at a 10th anniversary edition that’s the biggest and busiest yet, says Loiselle. The festivities open on the Westbury stage March 3 with the premiere of Ayita, a theatre/Indigenous contemporary dance fusion by the Indigenous film and theatre artist Teneil Whiskeyjack of the Saddle Lake Cree Nation.

“It’s been a long-time coming,” says Loiselle, who’d caught sight of Ayita as a Nextfest staged reading in 2019. “We’d hoped to produce it in 2021. But despite the pandemic we still managed to do the workshopping we needed to do — on the land,” she says of the piece, which weaves stories of three generations of Cree women into a contemporary fabric.

She describes the SkirtsAfire premiere production, co-directed by Lebogang Disele and choreographer Sandra Lamouche, as “very much Indigenous-driven. I’m just following the lead of an Elder (Alsena White), a Knowledge Keeper (Lana Whiskeyjack), and the creator herself.” And the company, including actors, dancers and technical crew, is nearly all Indigenous.

SkirtsAfire acquired, too, the dramaturgical expertise of New York-born Toronto-based Monique Mojica, an expert in land-based Indigenous theatre creation. Says Loiselle, “she’s so passionate about this very different way of creation, bringing Indigenous models into dramaturgy and the building and telling of stories.”

It’s a process of making theatre that is in striking contrast to Euro-centric colonial models — non-hierarchical, developed through movement,“tied to being on the land, to being rooted in Indigenous teaching and ancestry, to stories that have passed on for generations,” as Loiselle describes. “I’ve had to let go of my need to understand the process — and just trust it.”

When SkirtsAfire moves into a space, they occupy every corner. During the run of Ayita, the Westbury lobby (as designed by Daniela Masellis) will be the site of installations, too, connected to the production. 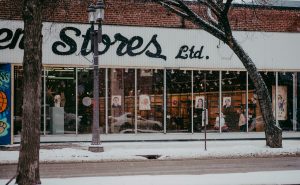 The expanded anniversary edition returns to the roomy old A&N space on Whyte Avenue. That’s where Dana Wylie’s “theatrical song cycle” Makings of a Voice was filmed last year for SkirtsAfire. And it’s where singer-songwriters performed in the front windows, with sound pumped out into the street where the audience could gather.

The mystery question for passers-by, laughs Loiselle, was what was in the darkness behind the activity in the windows. And answer was … nothing. “What if we actually had something to see?” This time, in partnership with the art and design company Vignettes, there is. And it’s something ambitiously multi-disciplinary: a main floor cabaret space, three interactive art installations and a live painter. Ah, and after the opening A-Line Variety Show March 4, five nights of entertainment: one is “a little bit country,” one is “a little bit roots and soul,” and two are “comedy nights” (Dirty Show & Celeste Lampa for one and Girl Brain & ZENON for the other). The festival has capped the audience at 100 max, for distancing.

For those who feel more secure on the outside looking in, the annual Skirt Challenge, Skirts On Whyte, happens in four Strathcona retail store-front windows: four skirts created by four designers assigned the same box of up-cycled materials in windows fully realized — à la Macy’s New York, says Loiselle — for colour and lighting.

Music? You’ll find singer-songwriters in The Key of Me series at the Woodrack Cafe, and a three-choir festival, Songs For The Sanctuary, at Holy Trinity Anglican Church.  Spoken word, storytelling, film? Seek out the schedule at the Westbury.

The challenges continue for festivals in these uncertain times. The contradictions built into city zoning requirements, and a granting system that favours “projects” over “programming don’t help. Neither does the provincial government’s sudden without-warning no-consultation jettisoning of COVID precautions. The performing arts industry, and SkirtsAfire, have worked so hard to keep artists, volunteers and audiences safe.“It’s really tough,” Loiselle sighs. “Such a challenging situation for businesses and the arts….”

But a decade of hard work later, the SkirtsAfire idea, a festival designed to amplify the voices of women and non-binary artists, has gained traction in the collective imagination. SkirtsAfire is an all-sizes fit.