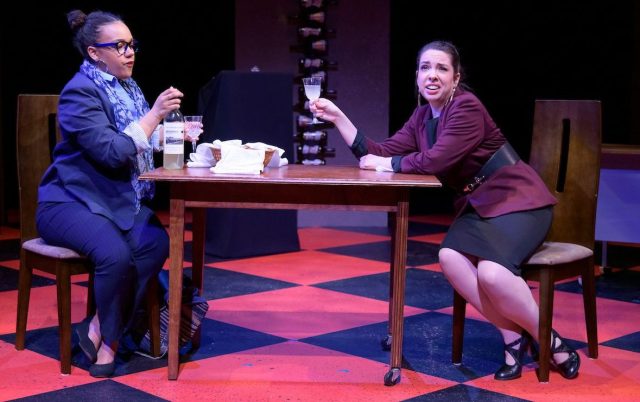 It’s telling that the oddball 2004 comedy launching Teatro La Quindicina’s return-to-live 40th anniversary season seems to wriggle out of every known category of their specialty.

I refer of course to comedy. Teatro, after all, is a company devoted (from birth at the 1982 Fringe) to adding shades to the comedy spectrum, elasticizing its usual demarcations — and generally to making people laugh while they’re doing it. This is a goal which in itself, one could argue, puts Teatro outside the theatre mainstream in this country, where comedy has tended to be undervalued.

Caribbean Muskrat’s nutty title, and a premise actually involving this exotic rodent onstage, suggest madcap activity, likely frantic in pace, and possibly farcical. But Caribbean Muskrat isn’t like that. It’s a comedy — co-authored by Teatro’s resident playwright muse Stewart Lemoine and improv star Josh Dean, a member of Teatro’s young company at the time — in which two women who’ve only recently met sit down to play cribbage (with snacks). And they actually do just that (and keep score).

It’s a comedy in which we watch a man and a woman watching a video of the latter sleeping. Andy Warhol and his famous five-hour ‘anti-film’ Sleep might cross your mind. But this pair actually ‘re-wind’ to see the funny bits again. 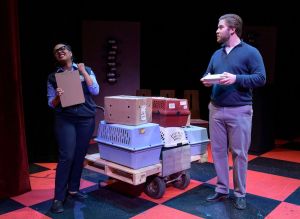 I feel that ‘quirky’, a fall-back term that’s been laundered out of all significance in the current age, might legitimately be revived for this revival. To boot, it’s a rare, maybe even the sole extant example of a comedy by a well-known Canadian playwright set in Kelowna or really anywhere in the Okanagan Valley. Comedies involving Customs agents are not thick upon the ground either. And unlike the vast majority of comedies in the repertoire, Caribbean Muskrat starts with a lecture on sleep disorders. “Sleep,” says the man who takes the stage at the outset with a clipboard. “ Our topic. Not an imperative.”

Dr. Hadrien Burch (Jackson Card), of The Burch Institute For The Advancement of Repose, is a sleep clinician. Additionally he’s Kelowna’s “third most eligible bachelor” according to The Kelownian. And he’s dating the chic hostess of a chic Kelowna winery/bistro. Cynthia Lodgepole (Rachel Bowron) has won a prize for attending a time-share video in Bimini, and traded with another attendee for the muskrat in question. Which explains why this high-maintenance charmer comes up against Canadian Customs agent Bess Wesley (Rochelle Laplante) of the animal import division. Tactical manoeuvring and a love triangle ensue.

The production directed by Lemoine gives three actors the fun of taking in hand the staccato pace of quick, often monosyllabic dialogue, interspersed with asides to the audience (and in the case of  Cynthia phone calls via bluetooth direct to her ear). Bowron and Laplante take particular advantage of it in their interplay. 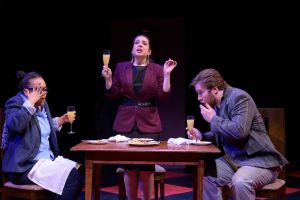 The former is very funny as the bright brisk take-charge Cynthia, whose role model in wine-tastings is Lucrezia Borgia, as she tells us. Imperious me-first certainties glint through the formidable charm whenever she’s crossed. In Bowron’s performance you can actually see the mental deductions going on behind that dazzling hospitality industry smile.

It’s sometimes designed to disarm other characters; sometimes it’s for unseen bistro customers; sometimes it’s a form of calculated self-deprecation that’s all about making her case with us (which is one definition of charm). Invariably she enters and exits at a trot, high heels drumming into the floor like a percussion score. And Bowron knows exactly what to do with the play’s funniest lines. 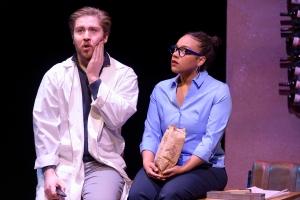 Laplante, one of the discoveries of the season, commands a more sardonic deadpan as Bess, the surprisingly resistant Customs agent. Her asides to the audience, replete with ever-so-slightly grim smiles and minutely skeptical eye rolls, are a cross between knowing we’re there and a kind of musing. Customs agents, after all, are professionally immune to charm. And mere high-end frittata, even with perfect hollandaise, is unlikely to change that.

Newcomer Card is likeably hapless as Hadrien Burch, the sleep clinician reduced to personal insomnia by a female dynamic he imperfectly understands. But the performance seems pitched to another kind of comedy altogether than the kind where a sleep clinician presents a point of view about sleep that “it’s like being unconscious, but better for you.” Or notes, of the muskrat’s future home in Cynthia’s two-bedroom lakeview condo, that the exotic critter “might even get his own room.” Or report back from the Customs agent that he “was unable to slake her endless thirst for answers.”

Instead Hadrien, in this reading, seems like someone who just stumbled into his line of work and is scrambling good-naturedly to present as a pro. Or maybe it’s just that arch is not his thing.

Anyhow, welcome back to live action, Teatro. And in an era full of sleep disorders for the performing arts, this season waker-upper, apparently assembled from a frittata of assorted improv cues and including mimosas, is fun.