Jane Eyre lives in a haunted world: Erin Shields’ new adaptation at the Citadel. A review 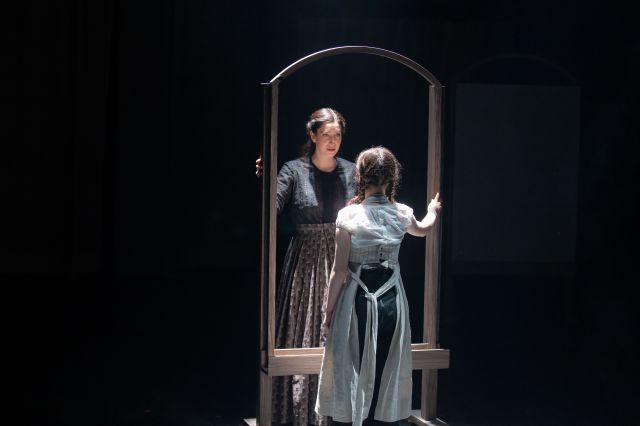 The opening image of Jane Eyre, currently premiering on the Citadel’s Maclab stage through Sunday, is a solitary little girl reading in a pool of light, enclosed in space by blank window frames.

The orphan heroine of Erin Shields’ new re-creation of the 1847 Charlotte Brontë novel, lives in a dark, haunted world, pursued through life by abusers, enforcers … and ghosts. And in the feminist focus of the playwright’s storytelling, it will be Jane’s mission, and her achievement, to find her own light in the darkness, to resist capture and shed her demons, to claim love.

The odds are against it, to be sure. The straight-spoken little orphan with the obstinate streak, first played by Ivy DeGagné and then as a grown-up by Hailey Gillis, is a solo resistance fighter in a world of walls —  Victorian proprieties and the adamantine economic status quo among them.

In the inventive production directed by Daryl Cloran, Anahita Dehbonehie’s design is dominated by a gauzy back wall, storeys high, through which moonlit trees glint or raging flames flicker. At times it becomes the mysterious Thornfield Hall, the gothic manor with a terrible secret; sometimes it hints of worlds outside and beyond.

Bonnie Beecher’s lighting is beautiful, and a transformative part of the storytelling as a long and complicated novel takes to the stage and sheds its narration (and its length, down to a fleeting two-and-a- half hours). The family portraits painted in shadow are an ingenious touch for a haunted house mystery. 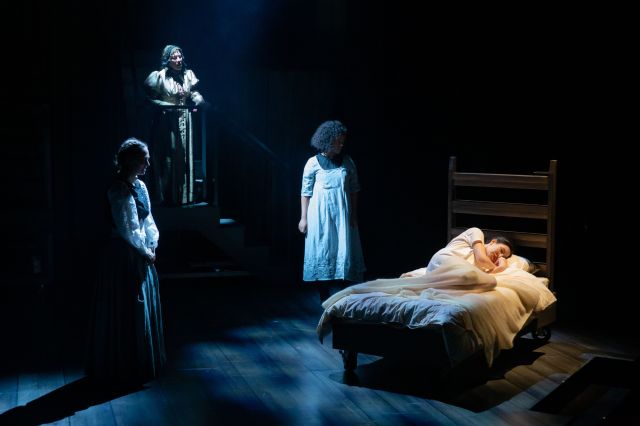 And in Cloran’s resourceful stagecraft, the daily activity of her life whirls around Jane. Window frames are hoisted and reconfigured, staircases are moved, beds whirl and become coaches. And a cast of nine actors become some four dozen-plus characters on the fly, sometimes flung offstage in one guise, re-entering as another. Which is the right moment to applaud Judith Bowden’s costumes, a fanciful class-defining gallery of hats and bonnets, aprons, skirts, frock coats … always fun to look at.

On both theatrical and feminist grounds, the adaptation claims the amusement value of having the male actors of the cast don the subservient bonnet, to to speak, to play the female maids, the cooks, the sidekicks, in addition to their other roles. After a while, gender shmender, you just stop noticing the goatee on the cook’s face (Garett Ross) as she affectionately scolds a couple of playful sisters in a country parson’s household.

The other indispensable aspect of the theatrical storytelling is the witty movement script created for the ensemble by Ainsley Hillyard of Good Women Dance. The passage of time is in the hands — well, the whole bodies — of the actors, whether the robotic procession of child “inmates” at the prison-like Lowood School or the rote repetition of Jane’s governess days, a rhythm of life as she rolls out of bed and starts again every morning, over and over.

Novels, especially the 19th century varietals, have built-in duration.  And the creative physicality devised by Hillyard, which never looks like imposed choreography, conjures the illusion of that, without the reality.

Gillis is captivating as Jane Eyre, fierce but watchful, a clear-eyed observer of the world who’s capable of moments of real stillness at the centre of perpetual motion. In Jane’s fiery, impatient younger edition, as played by the bright young actor DeGagné, you can see the origins of the older.

Ullyatt conveys both the alluring confidence and the mysterious restlessness of a man with a troubling secret. There is tangible chemistry between Rochester and Jane for the latter to resist.

The cast is dexterous. In the Dickensian array of macabre grotesques and sweet interventionists who trail Jane from her past, Helen Belay is lovely as Jane’s angelic (and only) friend Helen, with Nadien Chu a memorable brute in velvet as the awful Aunt Reed. Braydon Dowler-Coltman turns in a first-rate comic performance as the pompously  pious parson St. John; you’ll smile to see him take out a watch to limit his romantic fantasizing to exactly one minute.

The build-up of the story feels so detailed and full that the romantic resolution and the unravelling of the mystery in Act II do seem a bit rushed and precipitous by contrast. What? It’s over? And despite their being beautifully written (and delivered exquisitely by Gillis), Jane’s reflections on the imprisoned woman in the attic, the thought that they share an understanding of female confinement in a man’s world, just seem a little explicit and authorial under the circumstances of the play that’s preceded them.

But these are cavils. I’m coming to the production late (I was away when it opened). But I’m glad I didn’t miss an absorbing evening in the company of a much-loved story that in this new adaptation speaks our language (and in Jonathan Lawson’s score plays both the 19th century and our own time). Shields embraces its spirit of romance and its heroine with her sturdy sense of self. But in her adaptation Jane’s journey is propelled into our own century by the contemporary optic that love is a kind of eye-opening liberation. “You deserve your freedom,” Jane says to Rochester. “You deserve to be loved.”

Written by: Erin Shields, adapted from the Charlotte Brontë novel